NEWS: An elderly defendant has spent over two years in Spokane County Jail waiting for trial as his public defenders keep quitting. 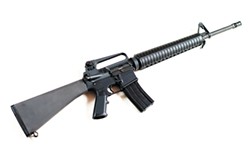 Before the Federal Assault Weapons ban expired in 2004, many models of the AR-15 were illegal. Now, the AR-15 is one of the most popular rifles in America and has been used in some of the most deadly mass shootings.

California mass shooting
Three people are dead and 12 injured after a shooting at a festival in Gilroy, California. (CNN)

"Better to Have a Few Rats Than to Be One"
If you haven't already done so, read the Baltimore Sun scathing criticism of President Trump after he attacked Maryland's 7th Congressional District.