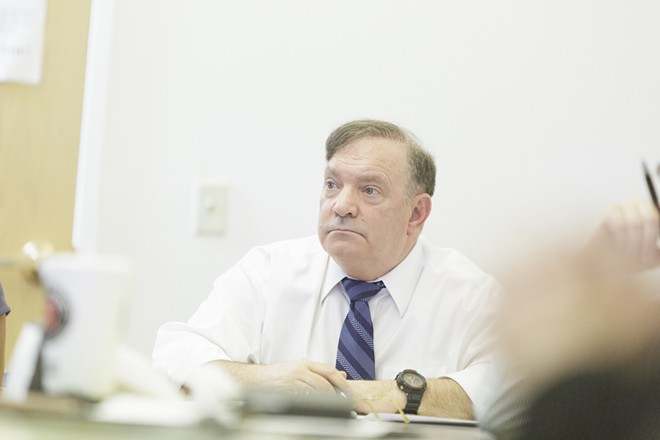 At a tense press conference today, Spokane County Prosecutor Larry Haskell said that his office would not file criminal charges against Brandon Rankin, the police officer who fatally shot 35-year-old David M. Novak on Jan. 7 in North Spokane. In response, Novak's family and friends, who packed the room at the press conference, shouted at him over his handling of the case — promising lawsuits.

According to the report on Haskell's conclusion, Rankin and the other officers involved in the incident were responding to reports of gunfire. They allegedly heard gunshots and believed that Novak was holding a shotgun or rifle before Rankin shot him. (He was pronounced dead on the scene.) Once officers arrived on scene, the event "unfolded in less than 60 seconds," Haskell said at the press conference.

However, only a baseball bat was recovered from the scene.

Haskell, who described Novak's death as a "true human tragedy," argued that Rankin's use of force was justified given the information that he had at the time that he pulled the trigger.

"I find that Spokane Police Officer Brandon Rankin was justified in his use of deadly force in this incident," Haskell said. "The law allows police to make a mistake of fact if it's reasonable. Under the facts reasonably relied upon at the time, Mr. Novak created an immediate and lethal threat to officers and, potentially, to others."
After Haskell delivered his verdict and opened up the press conference to questions, Novak's family quickly jumped in and lambasted him and Spokane Police Chief Craig Meidl, vowing to file civil rights lawsuits against both the city and county over the shooting and their handling of it.

"You can't go around shooting people," Debbie Novak, David's mother, said to Meidl, who was present. "You need to reel your officers in."

"We'll see you guys in court," Crystal Jenkins, Novak's sister, said. "This system is sick. You guys have no heart for anybody. My brother mattered. Every life that walks these streets matters. You treat us like garbage."

Here's how the events of Jan. 7 transpired, according to Haskell's report: The altercation stemmed from an argument between several residents of a home across the street from Novak's house in Spokane's Garfield Emerson neighborhood, per a witness account. Novak, who was drunk, approached several black men standing outside and allegedly stated that he was a KKK member and used racial slurs, according to Jolyn Maze, a witness. Novak then walked back over to his house — he paused to yell "I'm going to kill you n——-s — and came out with what Maze thought was a gun. As he was walking back into his house, Maze heard what he thought were gunshots, and promptly ran into his house, grabbed his personal rifle, and crouched down in the kitchen. 911 calls ensued.

At 10:24 pm, officers responded to the area of 620 W. Montgomery after dispatch received a 911 call from a neighbor that a 25-year-old white male with a gray sweater, hat, and blue jeans was shooting at their house. The first officer who responded, Trevor Walker, arrived at 10:27 pm and heard what he thought was a "muffled" gunshot that sounded like a shotgun. He relayed this to other officers using his radio.

More officers shortly arrived on scene — including Rankin. Rankin said in his statement that he heard what he thought was a "single gunshot followed by two more gunshots in quick succession" that sounded more akin to a "semi-automatic pistol" than a shotgun. Police gave Novak commands like "Spokane Police" and "get on the ground," and several officers reported seeing a haze or smoke near Novak that they thought was consistent with gunfire. (Officers also noted that it was dark out and visibility was poor.) Notably, while other officers said that Novak appeared to be holding a long gun of some kind at the time, Rankin stated that he could "not determine whether the suspect was holding a shotgun."

Novak eventually began walking up the steps to the front porch of his home. Rankin stated that he saw Novak "move his right hand towards his waistline" in what he thought was an attempt to "draw a weapon from his clothing or control the shotgun with both hands." He also said that the porch provided Novak a "tactical advantage" and that he was concerned that Novak might take hostages once inside the home. (Notably, one witness told investigators that Novak dropped the bat before he walked toward his home.) It was at this point that Rankin fired once, fatally striking Novak in his right side. Novak then re-entered his home and collapsed just inside the door.

At the press conference, Haskell said that investigators later determined that Novak had been "striking" a truck in his driveway with a bat "and did not fire a shot."

"Rankin believed that Novak was still armed," Haskell said. "There were other reasons to believe that a shotgun was involved."


Under recent changes to Washington state law governing criminal liability in police shootings — enacted through the voter-approved Initiative 940 — prosecutors no longer have to prove that officers acted in "malice" when they use deadly force. Instead, cased are subjected to a new legal standard that asks whether the involved officer believed deadly force was necessary and used in a lawful purpose and if a "reasonable" officer would have done the same with the information available in the situation.

Using this standard, Rankin's shooting of Novak was legal, Haskell said: "The statutory requirements in effect at the time are met. I won't be filing any charges against him."

Novak's family contested Haskell's accounting of events, claiming that they had been provided some body camera footage and that one of the officers yelled at Novak to "drop" the "bat" in the video before he was shot.

"You shot my brother on his front porch," Jenkins, Novak's sister, said. "Disgusting. Cold-hearted and disgusting."

Debbie, Novak's mother, railed against both Meidl and Haskell for not communicating with their family about Novak's case — she and others have repeatedly picketed the Spokane County court house about the case — alleging that they weren't informed of the press conference unveiling Haskell's verdict until a reporter told them.

"Do you realize how disgusting that is? That we have to come to this meeting and find this out about our loved one in this environment and in this room," she said.  "It is so cold." 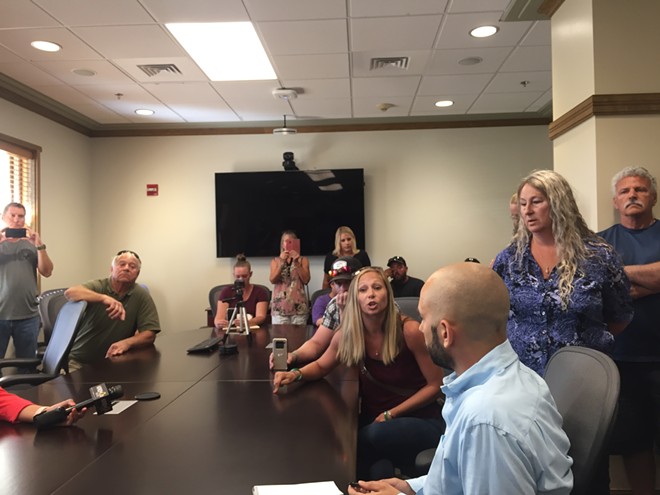 Josh Kelety Photo
Crystal Jenkins, fourth from the right, and Debbie Novak, second from the right, criticize Prosecutor Larry Haskell after his decision not to prosecute the police officer who shot David Novak.

Meidl said at the press conference that, now that Haskell's criminal investigation has ended, his office will conduct an internal investigation into the incident and will work to release the body camera footage to the public. (He also said that Rankin is back at work.) Haskell said that while Rankin's body camera was activated, several of the other officers had not turned on their cameras.

"I would ask you to understand, the dynamics of what the information was that the officers had," he told Novak's family.  "In their mind, they believed this was an active shooter."
In a statement distributed after the press conference, the Novak family's attorney, Rondi Thorp, stated that they intend to file "civil rights and wrongful death lawsuits against the city and county within the coming months."

"David Novak's civil rights were violated," the statement reads. "To be clear, David was in his own yard, on his own property, without a firearm and he was killed in a matter of minutes, if not seconds, by Officer Rankin."

"There was no firearm found at the scene and David Novak was shot and killed shortly after police arrived on his property, there is enough evidence that this case should have been brought before a jury," Thorp writes. "Our community members deserve better, especially after multiple officer-involved shootings that have shaken the trust in the Spokane community's law enforcement agencies, including the illegal cover-up that occurred during the Otto Zehm case."

At the end of today's press conference, Haskell, who had largely failed to diffuse tensions in the room during his exchanges with the Novak family, reiterated his condolences before pivoting back to his legal verdict: "I offer my condolences to the Novak family. Please take it in the manner in which it is meant, I'm a very sincere person," he said. "Beyond that, the legal analysis shows me, based on what the officers knew at the time, that the shooting was justified."

This post has been updated to include additional information from Haskell's report.
© 2022 Inlander