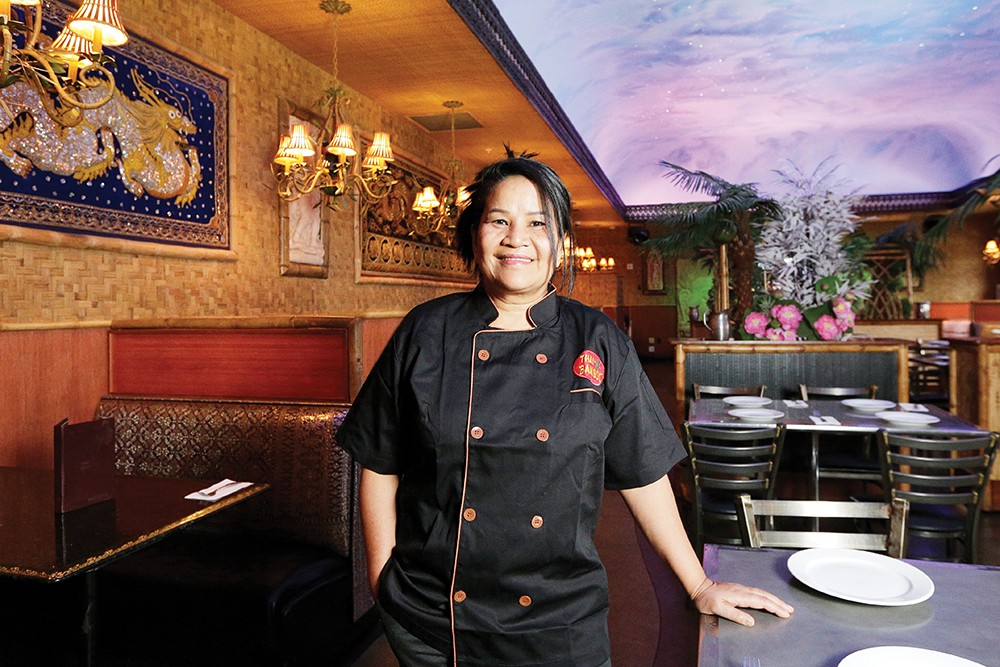 Young Kwak
Thai Bamboo’s May Burgess grew up in southern Thailand. “Thailand is a small country but we’re very rich in food.”

Ever wonder why there are no Thai fast food places?

"Because there's too many ingredients," says May Burgess, the co-founder of Thai Bamboo, which currently has four locations in Washington and Idaho combined, with a fifth location in the works on the South Hill. "And Thai food is always fresh."

Since opening Thai Bamboo's flagship East Valley location in 2001 with her husband Tom, May has made it part of her mission to share her love of and knowledge about Thai food and culture. All of the artwork inside their restaurants is custom-made overseas and shipped over so that people can get a sense of Thai culture, says Burgess.

There are four essential flavor profiles in Thai cooking, explains Burgess: sour, sweet, creamy, and salty. Sometimes crunchy is included, too, she adds, and of course there is spice according to individual preference.

Try it Yourself: Two Thai Dishes from Thai Bamboo's May Burgess

As for ingredients, garlic, peppercorns (both black and white) and cilantro are fundamental to Thai cooking, says Burgess, whose first Thai restaurant was with a family member in Seattle (it's run by her niece now).

In order to create the numerous and diverse items on Thai Bamboo's menu—soups, stir fries, curries, salads, noodle dishes, rice dishes, and desserts—Burgess sources fresh ingredients as locally as possible, especially during the warmer months. Some items, however, she does have brought over from Seattle weekly—things like lemongrass, bok choy, eggplant, coconut milk and palm sugar.

"I'm very picky about ingredients," says Burgess, who manages a staff of around 80 employees, and still spends a lot of time in the kitchen, especially at the North Division location.

Although the menu is already extensive, Burgess still likes to come up with new items for special occasions, such as Valentine's Day or Inlander Restaurant Week. And, separate from what guests are served, staff at every location gets together for a family style meal with cooking duties rotating amongst Burgess and her team of chefs.

She relays a story about getting a call from Robert Irvine's Restaurant Impossible scouts, looking to "rescue" Thai Bamboo several years back.

"They didn't realize we are successful," she laughs, noting how over the years they gained a foothold in the busy restaurant scene, expanding from the East Valley to North Division, to the South Hill and Coeur d'Alene, Idaho.

Burgess grew up cooking for the others in her family at a young age. Many of the ingredients came from the family garden. "We learned very young how to grow vegetables; it comes natural with me," says Burgess, who maintains a garden at home, but mostly for flowers, and especially to attract hummingbirds.

Burgess still does most of the cooking at home, and is partial to fish and vegetables. One of her favorite meals involves cooking fresh fish in a curry with green papaya.

She grew up near the ocean in southern Thailand. "Thailand is a small country but we're very rich in food."

One of the best parts of her job, says Burgess, is hearing customers express their appreciation for Thai food in general and Thai Bamboo specifically. She is also encouraged by the continued growth of the industry.

"All around Spokane, throughout the 16 years I've lived here, I've seen so many more foods from different cultures pop up," says Burgess. "Food from Japan, Ethiopia, the Middle East, India, and many more. It makes me so happy to see Spokane embrace this culinary diversity."