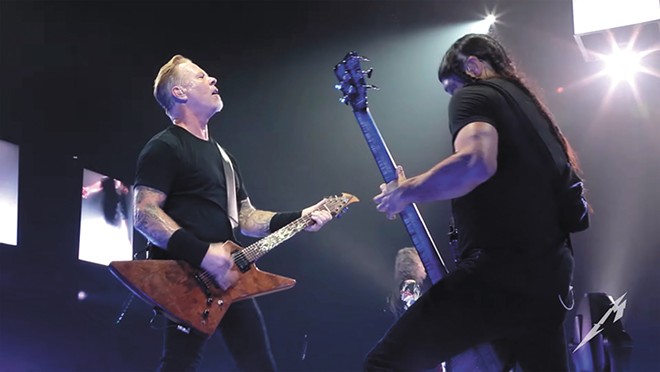 While not every musician has taken to the internet to perform live shows during the (almost) nationwide lockdown, it sure seems that way.

At least, it does according to my social media feeds, which lean heavily on bands and solo artists. We've written about some of the artists who jumped online early in the pandemic, and more and more musicians seem to be following suit, as you see in this week's cover story.

Here's a list of some more ways to connect with your favorite music until the days when we're all dancing together again:

Join the Spokane Symphony
Well, not actually join, but you can join the musicians on the symphony's Facebook page for online performances and fun bits of news, like Music Director James Lowe's getting a puppy.

Have Dolly Parton read you a bedtime story
The country star is a longtime literacy advocate. Now you and your kids can join her for Goodnight With Dolly episodes.

Bang Your Head At Home
Every Monday at 8 pm Eastern time, Metallica is posting a live concert video from their archives on their YouTube and Facebook.

Not Dead Yet
Dead & Company, the band formed by three Grateful Dead guys along with John Mayer, are offering streams of archived concerts every Saturday night. The band is asking for donations to the MusiCares COVID-19 Relief Fund from folks enjoying what they've dubbed the "Couch Tour." Catch the shows on the Dead & Company Facebook.

Live From Somewhere
The brilliant host of Live From Here, Chris Thile, is releasing archived shows and new performances delivered from isolation via the radio variety show's Facebook.

Country Cool
Singer/songwriter Amanda Shires is hosting live sessions she's calling I So Lounging on her YouTube channel, where her hubby Jason Isbell is a regular guest.

StageIt at Your House
Stageit.com has been hosting small shows online since before the coronavirus outbreak, but they've gotten a lot more attention thanks to folks like Rhett Miller from the Old 97s doing a series of live performances there.

Grammys That Don't Suck
The Grammy Museum is posting a series of concerts on its website and calling it Museum At Home, with nearly a new show every day (I'll be keeping an eye on Courtney Barnett April 22 myself).