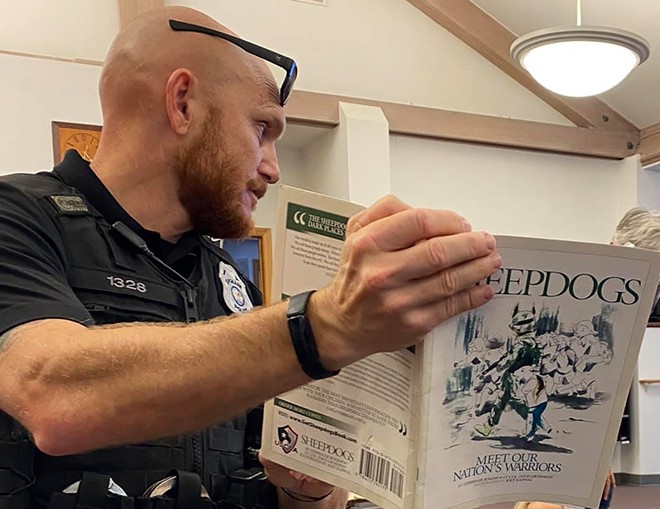 But a closer look sparked outrage. The story an officer read to the kids? It's called Sheepdogs: Meet Our Nation's Warriors, and it is co-authored by Dave Grossman, the guy who founded the controversial "Killology" training that critics say encourages police violence by training officers to see citizens as a threat. (UPDATE: The SPD Facebook post appears to have been removed.)

Spokane City Council President Breean Beggs says the goal should be trying to heal the divide between police and the community, and Beggs argues Grossman's trainings do the opposite.

"I reject that worldview, and I think it's very counterproductive," Beggs says.


Julie Humphreys, spokesperson for the Spokane Police Department, says it wasn't just the police department that chose this book to read at Beautiful Savior Lutheran Church's Early Learning Center. The school has the book in its library and has invited Officer Graig Butler to read it for the last three years. (The school didn't respond to an Inlander request for comment Wednesday.)

Still, Humphreys says the department doesn't see an issue with the book being read.

"SPD is supportive of the book as it describes the role of law enforcement to protect and serve communities," Humphreys says. "Officers are paid to keep communities safe and to help solve problems. Educating the public, including children, about an officer's role and function is part of community outreach."

The children's book, also co-authored by an elementary school teacher, is a distillation of the so-called "sheepdog analogy" popular on the right and introduced by Grossman in his 2004 book, On Combat, The Psychology and Physiology of Deadly Conflict in War and in Peace. Yes, it's the basis of a famous monologue from American Sniper.

In fact, an excerpt from On Combat explaining the sheepdog analogy is featured at the end of the children's book.

As Sheepdog explains, it's a worldview that essentially boils down to this: There are sheep, representing most citizens who are oblivious to — or in denial of — the dangers around them. Then there are wolves who want to hurt the sheep and do not care about others. And then, of course, there are the sheepdogs ready to sacrifice themselves to save the otherwise helpless sheep from the big, bad wolves.

The children's book isn't very subtle about who the sheepdogs are. They're typically police officers or soldiers — with little distinction drawn between the two. Sheepdogs depicts the sheepdogs in police or military uniforms. At one point, the children's book shows a sheepdog holding what looks like a military-style rifle crawling under barbwire.
click to enlarge


"It takes a predator to catch a predator, so the sheepdogs spend a lifetime practicing their skills and their use of force," it says under the cartoon illustration. "They nurture their desire to protect and guard the innocent."

Grossman's original sheepdog analogy explains that sheep "live in denial," though he insists in his essay that he means nothing negative by that. Rather, he explains, sheep without sheepdogs are like eggs without a shell, and police, soldiers and "other warriors" are that shell.

The children's book explains that sheep (the public) may not always want sheepdogs (police) around but need their help nonetheless.

"When do they change their minds? When the wolf comes! Then the whole flock tries to hide behind the closest sheepdog," the book says.

The children's story says that sheepdogs can be anyone else willing to sacrifice themselves for other sheep, whether they're in uniform or not. And it ends with a reminder that people are not like animals because they can choose who they want to be. Yet it still only gives those three options: A sheep, wolf, or sheepdog. 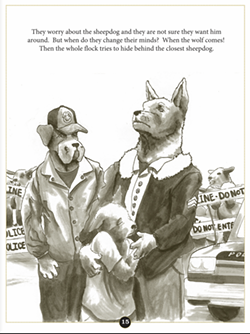 In Sheepdogs, sheep run to sheepdogs when they need protection from wolves.
This sheepdog analogy is central to the "warrior" mentality that Grossman teaches. And it's a major piece of what Grossman's critics object to.

Andrew Biviano, a local civil rights attorney, argues that instead of warriors, police should see themselves more like guardians. And there's a big difference. If police respond to a person having a mental health crisis with a "warrior" mindset, they may think it necessary to somehow defeat that person, instead of protecting them like any other citizen, he says.

"A warrior mindset says there are good guys and bad guys and we need to destroy the bad guys," Biviano says. "That's a fundamental problem that's dangerous to teach our kids."

People who commit crimes are not always "malicious wolves," as the sheepdog analogy suggests, Biviano says. They could be a teenage kid making a bad choice to steal who is running away from police because he's scared.

Beggs also disagrees with the sheepdog worldview — not only with the idea that criminals are always evil, but also that the rest of society is powerless to protect themselves.

Though there are certainly situations where police officers do need to save lives, Beggs says, the sheepdog analogy is too simplistic.


The Spokane Police Department has never formally invited Grossman for a training, though Humphreys says some officers may have attended trainings put on by other agencies. She says ever since the school visit last week, the community outreach officers have received "a collection of thank you notes from students who appreciated his visit and enjoyed learning that officers are parents, neighbors and community members too."

Beggs points out that the officers he talks to generally don't view human behavior as black and white as Grossman's sheepdog analogy. And while he is "concerned" and "disappointed" that this book was read to children, he says he's a firm believer in the First Amendment and doesn't think the government should be deciding what books police can or can't read to kids.

Still, he says the optics of reading that book to children aren't good. "I think it's great that city employees are taking time to interact with kids. But of all the books that could have been chosen to be promoted on our police department's website," Beggs says, "I wish that was not the one."
© 2021 Inlander