NEWS: Even though only about half of students considered homeless in Washington graduate in four years, about 75 percent of homeless students graduate in Spokane, a report says.

NEWS: Spokane Valley Rep. Matt Shea, a man who has close ties to the region's American Redoubt movement, presented a "2016 Patriot of the Year" award to Anthony Bosworth, a man with a controversial and alleged violent past.

NEWS: Mayor David Condon commissioned a poll that has a consulting company out of California surveying Spokane residents to suss out the effectiveness of arguments against recalling Condon. Did you get a call? 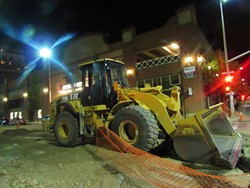 Daniel Walters photo
Don't expect bulldozers like this one downtown to go away anytime soon
Downtown construction
Yesterday, City Council President Ben Stuckart wanted to know if there was any way to speed up construction downtown on Lincoln and Monroe streets. The answer? Not really. And the construction may actually spill over into next year, if weather doesn't cooperate. (Spokesman-Review)

Death of 2-year-old
A 2-year-old girl was found dead at a home on the South Hill, and detectives are trying to figure out what happened. (KXLY)

Bad for business
The NCAA is pulling seven championship tournament games from North Carolina because of the state law that prohibits protections for LGBTQ people and requires transgender people to use bathrooms corresponding to the sex on their birth certificates. A spokesman for the state's Republican Party said in response, "I genuinely look forward to the NCAA merging all men's and women's teams together as a singular, unified, unisex teams."

Recession Recovery
Household incomes increased by 5.2 percent in 2015, breaking years of income stagnation for American families, according to the U.S. Census Bureau. Also, the number of households living in poverty shrank by 1.2 percentage points.