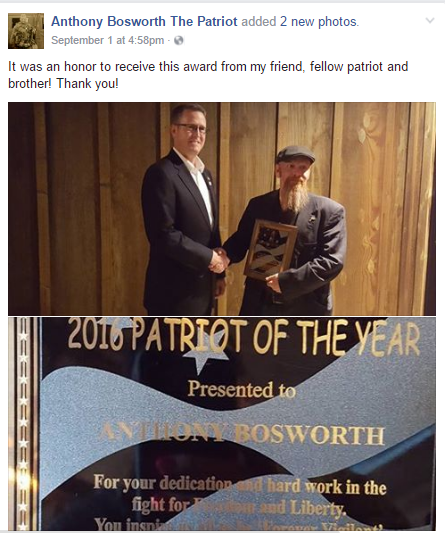 On Facebook earlier this month, former Yakima County Sheriff Candidate Anthony Bosworth posted a photograph of Spokane Valley Rep. Matt Shea presenting him with an award naming Bosworth a "2016 Patriot of the Year."

Shea, who's closely connected with the Inland Northwest's American Redoubt movement, has praised Bosworth as a patriot before, but this makes it official.

“For your dedication and hard work in the fight for Freedom and Liberty. You inspire us all to be ‘Forever Vigilant’ in the preservation of a God honoring and to never, ever give up," the plaque says. “If ever the Time should come, when vain & aspiring Men shall possess the highest Seats in Government, our Country will stand in Need of its experienced Patriots to prevent its Ruin — Samuel Adams.”

You may recognize Bosworth if you've been closely following the fallout from the Oregon standoff at the Malheur National Wildlife Refuge in January.

In an incredible story for Oregon Public Broadcasting, John Sepulvado reported that Spokane Valley Rep. Matt Shea had given Bosworth, an Iraq war veteran, a mission:


At Shea’s request, Anthony Bosworth – a one-time candidate for Yakima County Sheriff – went to the refuge as a “security specialist.” He also stayed at the facility.

“I traveled to the refuge in an attempt to de-escalate the situation… at the request of the Coalition of Western States,” Bosworth wrote in an email.

In a recording of an April speech before the Constitutional Republicans, Shea casts himself as a hero who helped make sure the Malheur refuge occupiers got their message out and was resolved — other than the shooting death of rancher LaVoy — relatively peacefully.

“I sent one of our folks from the coalition in there, Anthony Bosworth, into the refuge. And he got all the people together, they had a meeting, and they said, ‘What should we do?'” Shea said. “And I said, ‘You guys have brought a lot of national attention to this issue. Great job, now’s the time to go home.”

Shea suggests Malheur would have been a massacre without his and his allies' involvement.

“They said Matt, you’ve got to step in, they’re going to go kill ‘em,” Shea says in the recording. “And I honestly believe that is exactly what would have happened. There’s no reason to march an armored column down to a refuge unless your intent is to raid the refuge.”

Bosworth was an odd choice for a man to de-escalate a tense situation. He has a history of confrontation, to say the least.

For example, in Spokane last year, Bosworth was arrested for refusing to leave the Federal Courthouse plaza after being asked not to bring his AK-47 on federal property. The arrest sparked tense protests. Ultimately, however, Bosworth was only given a $250 fine from a judge who called Bosworth “a man of principle.”

The whole thing won Bosworth fans and respect from some conservatives. "Most of us in the liberty movement, myself included, are too chicken to put everything on the line, as he does," local gun-rights activist Vitaliy Maksimov told us last year.

But on some occasions, Bosworth has allegedly become violent. Sepulvado reports he got into a fistfight at the late rancher Finicum’s after convicted felon Adrian Sewell accused Bosworth of stealing Finicum's guns the night they left the refuge.

And after the standoff, Bosworth made headlines again, this time for an alleged assault. Here's the Yakima Herald-Republic a few months ago.

Yakima police said they responded Tuesday afternoon to a report that Bosworth had choked his 17-year-old daughter and dragged her by the hair in the parking lot of a driving school in the 2500 block of West Nob Hill Boulevard.

He’s also accused of hitting a 31-year-old woman who tried to intervene as other witnesses recorded part of the incident on their cellphones, according to the arrest report.

Bosworth, 42, was booked later that evening at the county jail on suspicion of second- and fourth-degree assault.

Bartheld indicated that Bosworth’s daughter is now under the care of the state Child Protective Services unit and ordered him to have no contact with her.

The next hearing for the fourth-degree domestic violence will take place in Yakima Municipal Court this Friday.

"This is the Patriot of the Year? I’m not so sure about that," says Sheriff Ozzie Knezovich, a frequent Shea critic. "If Shea’s definition of a 'patriot' is a man that would hit a woman, I don’t think so."

Even within the militia community, Bosworth is controversial. After our cover story about Knezovich's clashes with Shea, Bosworth posted this on Knezovich's page:

The comment "I'm your huckleberry," of course, references Doc Holliday's defiant line in Tombstone that precedes a shootout. Knezovich took it as an implied threat.

It caused Kit Lange, a leader of a "Liberty For All" 3 Percenter group in Washington state, to distance her group from Bosworth. Last December, Lange told us that she and Sam Wilson, another Liberty For All leader, "were not comfortable with the photos that were displayed.

"We wanted to focus more on training and educating people as opposed to starting that ruckus," Lange said. "We’re not looking to start a fight."


Washington State Attorney General Claims to understand the Constitution.
He claims Americans owning arms of their choosing is not supported by the Constitution.
Clearly he is willfully ignorant of History.
Our founding fathers did not comply with the demands of a tyrannical government demanding the colonists to relinquish their only means of Defense against an over-reaching murderous tyrannical Authority.

We will not comply.
We will stand.
We will resist.
We are willing to die to preserve the Liberties of our children.
Your move!
Anthony Bosworth the Patriot
LFA III%

Both Bosworth and Shea have in the past declined to speak with the Inlander  (or as Shea occasionally calls us, the ".")

On some rare occasions, Shea has spoken with the Inlander, but on he's blocked media outlets who attempt to ask him questions.