NEWS: If you haven’t already, check out last week’s cover story about what a trade war with China would mean for Washington state, which is one of the most trade-dependent states in America.

NATION: The first wave of immigrant children separated from their families at the border have been reunited, the New York Times reports.

“Germany is totally controlled by Russia”

Trump has a bone to pick with Germany. The President had harsh words for the country and its leader during a NATO summit on Wednesday. (BBC) 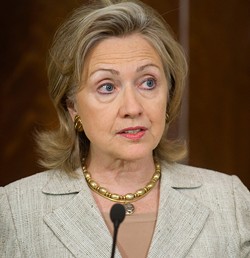 Hillary Clinton is still the talk of Fox News. Is the former secretary of state, former first lady and presidential candidate making news? No. Yet, it seems she has become a necessary, maybe even vital, part of the news network’s programming. “Fox News has devoted itself to painting Trump as a protagonist, which can be hard given the scandals, the incompetence, and the cruelty. But with the perfectly crafted villain, anyone can be made a hero,” writes Alvin Chang. (Vox)