Spokane's Sheriff Ozzie on how he'd handle an Oregon militia-style event (and his clash with Rep. Shea) 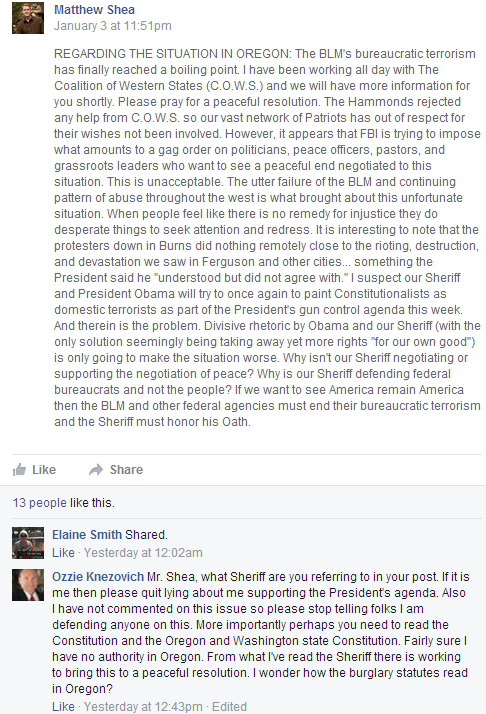 "I’m updating it a little to address the issues that have happened since then — Paris, San Bernardino, this mess in Oregon right now," Knezovich says. "It’s guaranteed to irritate the Tea Party further."

Last year, the long-simmering dispute between Spokane County Sheriff Ozzie Knezovich and Rep. Matt Shea came to a boiling point. A December 2014 comment from a deputy about the need for heavy-duty armored equipment for a "constitutionalists" event strained an already tense relationship between the sheriff and more libertarian groups in the valley, including Rep. Matt Shea.

In our cover story this year, we detailed Knezovich's condemnation of Shea's anti-government rhetoric. Knezovich claimed Shea was being dishonest, and his dishonesty could result in future violence. And Shea returned fire, lumping in Knezovich with "willfully ignorant Loyalists."

Unsurprisingly, the recent armed occupation of the Malheur Wildlife Refuge in Oregon by militia members — a protest of the way that ranchers Dwight Hammond Jr. and Steven Hammond were being prosecuted under mandatory minimum laws after being convicted of arson on federal lands — has had resulted in Shea and Knezovich clashing once again.

"I’ve actually been following it fairly closely," Knezovich says. "I’ve talked to the FBI about it. Especially after Matt Shea’s post from yesterday.... [He] basically stated that the FBI was trying to prevent a peaceful solution to the issue."

Shea himself had been a public part of the confrontation at Cliven Bundy's ranch in Nevada in April of 2014. But in this case, while Shea continues to refer to the Bureau of Land Management as "bureaucratic terrorists" Shea hasn't made an appearance in Oregon, despite his involvement with the Coalition of Western States.

"The Hammonds rejected any help from C.O.W.S so our vast network of Patriots has out of respect for their wishes not been involved," Shea wrote on Facebook. But he also accused the FBI of trying to prevent a peaceful resolution, and straight called out Knezovich for "defending federal bureaucrats and not the people."

The Wildlife Refuge occupation has split even groups who have joined the confrontation at the Bundy ranch, with groups like the Oathkeepers saying, "No patriot group or individual has the right or the authority to force an armed standoff on this family, or around them, against their wishes."

Patriot and militias groups are frequently divided over ideology and tactics, and this is no exception. On the other hand, civil liberties writers like Conor Friedersdorf have argued that the issues the latest confrontation has highlighted around mandatory minimums are legitimate ones.

But Knezovich, a vintage law-and-order conservative, isn't sympathetic to the Hammonds, citing the allegation that Hammonds were trying to “light up the whole country on fire" in order to cover up poaching.

"This wasn’t just a little, 'Oops I burned some weeds," Knezovich says. "This was done purposefully."

But his condemnation of Ammon Bundy and the militia pointed.

"They hijacked the Hammond issue for their own purposes," Knezovich says. It particularly irritates him as a gun-rights supporter. "Quite they are doing severe damage to their cause. Doing severe damages to their organization."

He doesn't buy the idea these militia members are part of the age-old American tradition of civil disobedience.

"Breaking into buildings, causing hate and discontent, that’s no longer civil disobedience, that’s breaking laws," Knezovich says. "It’s one thing to protest and everything else. The Constitution gives you the right to address your government peacefully. [But] they need to start living up to the constitution they claim to support."

He says some of these groups are indeed looking to start a revolution.

"These people are looking for what I call the second shot heard around the world. They are looking to cause that," Knezovich says. "To the sheriff's [department] down there, kudos to them. They’re not giving it to them."

He suggests such a confrontation could certainly happen in Spokane County in the future. "It could have happened with the federal courthouse building with [gun-rights activist Anthony] Bosworth," Knezovich says.

So how would he, as sheriff, handle such a militia standoff?

"We're not going to give them what they want," Knezovich says. "We’re not going to make them martyrs... [But] if they come and point guns at people, they will be arrested."

Let them protest until they burn themselves out, he says. Then, after they leave, that's when you arrest them and file charges.

In anticipation of his presentation, I also pressed Knezovich on the claim during last year's presentation that there was a "War on Cops," pointing to the fact that 2015 was one of the safest years for police officers in recorded history.

But Knezovich says concentrating on the number of law-enforcement deaths misses the point. It's the manner of deaths he says. "To make that jump, and say, 'oh, everything's fine and dandy,' totally ignores the deputy sheriff being shot in the back of the head filling up the vehicle" and other assassinations of law enforcement officers.

In other words, rather than police officers being shot during a drug raid, these appeared to be people specifically being targeted because they're cops. And that, Knezovich argues, is what has law enforcement worried.

Junior into the Hall, Inslee on gun violence and other news to start your day