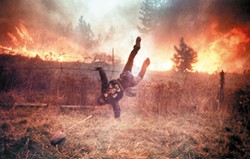 Gordon Maxwell dives over a fence as flames from Firestorm '91 rush towards him near Ponderosa in this award-winning photo by the late Kit King. Maxwell is a cook at a local restaurant. (Kit King / SR)
Yesterday was the 25th anniversary of Firestorm, and today the S-R reprinted a Jess Walter article from 1991 detailing the destruction (behind paywall).

• GOP headquarters in N.C. is firebombed
No suspects yet.

• Richard Sherman melts down, but Seahawks hold onto to beat Atlanta
Coach Carroll says he's not worried about the tirade: “These guys have been through too much together, they care too much about one another. I’m not worried about it one bit."

• Local real estate continues to be hot
The Spokane Association of Realtors says the median home price in may was $200,000, up 14.3 percent from the same month last year. (KXLY)