NEWS: A Spokane public defender who helps defend poor and disadvantaged clients is recognized for his work, which among other things includes hosting a free legal clinic and being a leader in Spokane's Community Court. 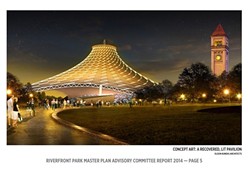 NEWS: To cover it, or not to cover it? That's the question the Spokane Park Board has put off voting on until next month, while they get more information about what it would take to cover the U.S. Pavilion in Riverfront Park.

WHAT'S UP? Looking for something to do this week? We've got you covered, from baseball to music, food to film.

First time for everything
Maryland and D.C. attorneys general filed a lawsuit against President Trump today, alleging that because he hasn't cut ties with his businesses, he's violating the emoluments clauses of the U.S. Constitution, which the New York Times reports is a first: "The complaint enters uncharted legal territory: No state has previously accused a president of violating the emoluments clauses."

Operation 'restoration'
Crews have finished replanting saplings where more than a mile of trees were illegally bulldozed in April, the Spokesman-Review reports. It remains to be seen if the young trees will weather the hot summer, concerned parties pointed out.

Open Sessions
Attorney General Jeff Sessions will testify before Congress on Tuesday; he'll likely be asked about what ousted FBI Director James Comey meant last week when he said the FBI had information "that would have made it 'problematic' for Sessions to be involved in the probe" into Russia and the 2016 election (before he recused himself), reports the Washington Post.