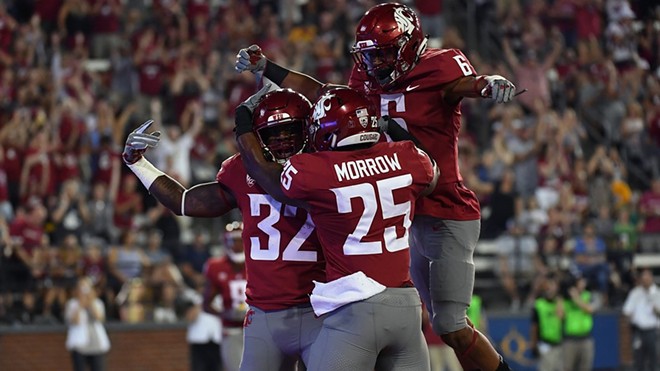 WSU Athletics
A game worth celebrating as the Cougs shut out Montana State in their season opener.
Welcome to another season of the Monday Morning Placekicker, the Inlander's weekly catch-up session on the doings of the region's sports teams, allowing total sports geeks to relive (hopefully) some glory from the weekend past, and uninterested and casual-at-best observers to get a Cliff's Notes version to help keep up with sports talk around the dinner table at home or watercooler at work. We'll typically be here every Monday, but the Labor Day holiday pushed us back, so consider this the only Tuesday Morning Placekicker you'll likely see this season.

There was a lot of great football and exciting games in the first full weekend of the college football season. Did you get a load of UCLA's comeback against Texas A&M on Sunday? Or Tennessee's inexplicable win against Georgia Tech on Monday? Insane.

For the teams close to Spokane, the weekend kind of played out how you'd expect. That was just fine for the teams on the Palouse. The University of Idaho took out Sacramento State last Thursday with an efficient 28-6 thrashing of the FCS club. Next up is UNLV, a team that lost at home to Howard in its opener; the Rebels play Saturday in Moscow at 4 pm.

Washington State likewise took care of business, and saved their fans a lot of consternation by finally winning a season opener under coach Mike Leach. The Cougs took out FCS squad Montana State and pitched a shutout in the process, beating the Bobcats 31-0 behind an incredible performance by quarterback Luke Falk. He set the career record for touchdown passes in the process of dispatching the team from Bozeman; on the day, Falk completed 33 of 39 passes. It was a beatdown. Next up for the Cougs is a showdown Saturday in Pullman against Boise State; the game starts at 7:30 pm and will air on ESPN. 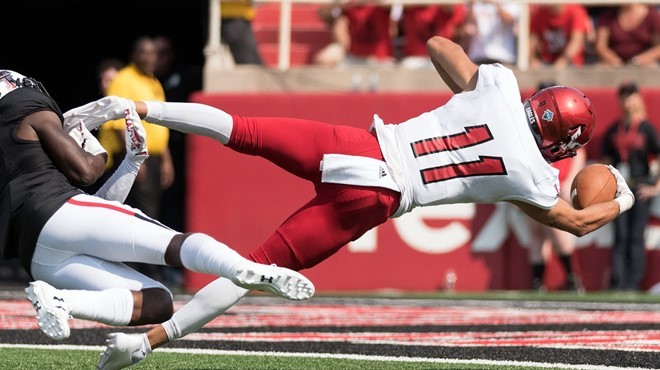 EWU Athletics
One of the few highlights for the Eags on their tough trip to Texas Tech to open the season.
Things did not go as well for Eastern Washington for their trip to Lubbock to face Big 12 team Texas Tech. New coach Aaron Best had the Eags hanging tough early, but soon enough, the difference in the teams' talent became clear and the Red Raiders pulled away, easing to a 56-10 win. Next up, the Eags face FCS powerhouse North Dakota State on Saturday in their home opener; the game starts at 1:05 pm at Cheney's Roos Field.

Finally, the Whitworth Pirates successfully opened their season with a road trip to Central College in Iowa, winning 56-13 behind quarterback Ian Kolste's six touchdowns in just over two quarters of play. The Pirates were up 35-0 at halftime, and breezed to the finish. Up next is the Pirates home opener against Whittier, Saturday at 11 am at the Pine Bowl.