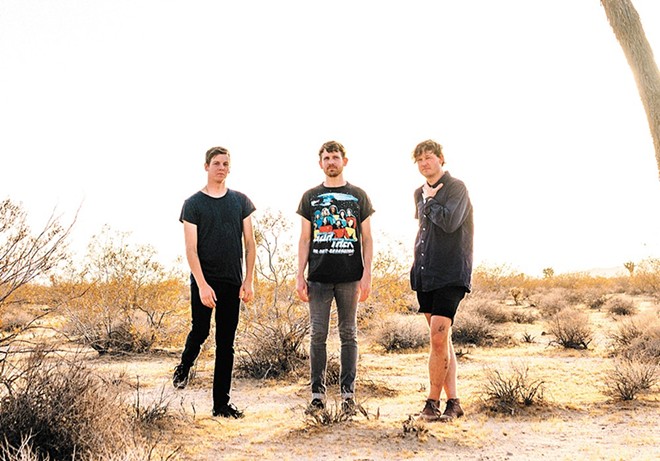 
If you're in need of something fun to do, check out event listings and Staff Picks. Here are some highlights of the week ahead:

MUSIC | Dry Erase is band blending members from Oakland and Berlin to create some glitchy art-rock. They'll be joined at Baby Bar by Peru Resh and Stares. Great way to start off the week.

FILM | Lucky Palouse residents can hit the Palouse Cult Film Revival tonight for a screening of legendarily bad flick The Room. Seeing it with a crowd is the way to go.

COMMUNITY | In this corner, it's some Rogers High students. And in THIS corner, it's a couple of local judges. It's a verbal showdown at Rhetoric in the Ring IV, the annual fundraiser for Rogers High debate.

MUSIC | It's Northwest of Nashville time again, so get ready to get a hoedown on at The Bartlett, with Jenny Anne Mannan, Laddie Ray Melvin, Bitter Oak, Justin Landis and Liz Rognes.

COMMUNITY | Head to Gonzaga Law School for a screening of The Profanity Peak Pack: Set Up & Sold Out, a documentary about the decimation of one of Washington's wolf packs.

MUSIC | STRFKR had to cancel their last planned show in Spokane, but they're back to make up for it with a headlining show tonight at The Knitting Factory. Here's a little sample:

THEATER | If you love a jukebox musical, then Motown: The Musical is built for you, packed with 50 Motown classics. It opens its run at the INB tonight.

FOOD | We have a great story about events inspired by Scottish poet Robert Burns, including this Robert Burns Whisky Dinner tonight.

MUSIC | Josh Ritter is a local fave (and Moscow, Idaho, native), and a national one as well, and he comes to Knitting Factory for a show with his Royal City Band. Check out our new issue for an interview.

COMEDY | Laughs for a good cause: take in the Broad Comedy show at The Bing, and raise a little dough for Planned Parenthood.

MUSIC | Rough-and-tumble Southern rockers Banditos pull in to The Bartlett for what is sure to be a great show. Check out the new issue for an interview with the band.

MUSIC | The Coeur d'Alene Casino welcomes Skid Row and Great White for a show. There will be a lot of '80s hits happening, so gird yourselves for a serious flashback.

MUSIC | Indian Goat, The Wild Lips and The Uninspired join up for a seriously rocking evening at The Observatory.