SPD tried to punish Sgt. Gately for tipping off an officer being investigated for rape. Then the Police Guild got involved

But Gately wasn't fired. Not only but when the Police Guild stepped up to his defense, they succeeded in getting what punishment he did receive reduced.

It highlights both the power that the Police Guild has and the challenges that a chief faces in disciplining an officer. Even when their actions clearly violate the department's standards, all that can be overturned by an independent arbitrator.

Gately had informed Gordon Ennis that the police were coming to his home after Ennis allegedly raped a female officer while she was asleep. (When Ennis asked why, Gately testified that he said, "Probably for your DNA.")

The trial of Gately on charges of obstructing a police officer resulted in a hung jury, and so far he hasn't been . In this week's print edition of the Inlander, we explained how Gately kept his job.

After an internal investigation into Gately, Spokane Police Chief Craig Meidl issued a punishment in February of last year: Gately would be removed from the Peer Assistance Team — a group that supports other fellow officers — and he'd be placed on four weeks of unpaid leave. Only his long career and the culpability shared by the SPD administration stopped Meidl from firing Gately.

Yet even the punishment that Gately did receive was too much for the guild.

"It is the guild's position that the city violated Article 24 of the parties collective bargaining agreement when it disciplined Sgt. Gately without just cause,"  John Griffin, the new Spokane Police Guild president, wrote in a letter a few weeks later. Griffin asked that the punishment overturned and that Gately "made whole for the losses sustained."

Griffin did not return phone calls from the Inlander last week.

Police Chief Craig Meidl, in his response, cited Gately's own words, noting that even Gately's attorney had admitted what Gately had done was inappropriate.

"Based on Sgt. Gately's own testimony and [internal affairs] interview, and the corresponding records and statement by Gately's own attorney, the discipline is justified and meets the just cause principles," Meidl says.

But Meidl's word wasn't final. Gately appealed the decision, and it got sent to arbitration. An arbitrator, tasked with interpreting labor laws, has considerable power to overturn or modify a punishment.

The arbitrator reduced Gately's unpaid leave from four weeks to just one.

Among other factors, the arbitrator wasn't convinced that Gately had intentionally been trying to impede the investigation, according to a source with knowledge of the decision.

It meant, according to public safety spokeswoman Michele Anderson, that the department had to actually pay Gately for three weeks of originally unpaid leave. That's on top of any money the city may have had to pay Gately back after his initial trial.

According to Spokane Human Resources Director Chris Cavanaugh, Gately has already received a partial payout, but the exact amount he is owed is still under dispute over questions like whether he gets paid for missed overtime.

Sheriff Ozzie Knezovich, who served as a union president with the Spokane County Sheriff's Office before becoming sheriff, says that police unions often feel a need to represent employees in their grievances — lest they sued for failure to represent.

But they still have a choice over which grievances they bring forward, he says.

"Having been a union president, it’s probably not one I would have fought for," Knezovich says.

The guild, after all, was also supposed to be representing Ennis's alleged victim.

Knezovich, of course, has long expressed frustration over the power of police unions.

"This is one of the stumbling blocks to helping us repair the trust for the public," Knezovich says. "There was a time when I could say all confidence that a police who tells a lie is terminated. I can’t say that, [now]. I live in the state of Washington."

And don't think he hasn't tried to
click to enlarge 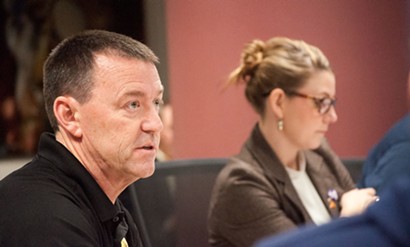 Daniel Walters photo
Sgt. John Gately at a city council work session with Councilwoman Kate Burke, who has publicly criticized the police department for continuing to employ Gately
change it. In 2013, Knezovich and then-Rep. Kevin Parker, R-Spokane, tried to push a bill that would prevent an arbitrator from overturning discipline against an officer if there was "clear and convincing evidence" the officer lied or committed a crime.

But Knezovich says law enforcement unions were too powerful and too generous with campaign donations for the bill to get traction.

"Integrity gets sold out," Knezovich says. "I met heavy resistance. We couldn’t even get it out of committee."

In 2016, the Inlander took a look at one case that sticks in Knezovich's craw in particular:

Deputy Travis Smith was fired in 2011 following sustained findings of sloppy report writing, improper searches and seizures, conduct unbecoming of an officer, failing to log evidence, neglect of duties, excessive force, discourteous treatment of the public and, the final straw, criminal property damage in which he plunged a 4-inch knife into the seat of a truck he was searching.


Knezovich fired him. But in 2011, the arbitrator reversed the decision.

"'The sheriff did everything right. Followed the law. Proved his point. Proved you did this,'" Knezovich says, paraphrasing the arbitrator's comments to Smith. "But, you’re young, you worked hard to become an officer. You get a second chance.' This is an officer who committed a crime and was not truthful. He got his job back."

Knezovich says that arbitrators often have a financial incentive to try to reach a compromise in all cases, no matter how clear one side or another is in the wrong.

"An arbitrator who is known to be pro-union or pro-management doesn’t get work," Knezovich says.

Even just talking about specific cases can be legally dicey. Meidl was cautious about discussing details with the Inlander last week because of the possibility of legal action from the guild. Knezovich, also cautious, wanted to avoid legal accusations of creating a hostile work environment by discussing specific arbitration cases.

Breean Beggs, a City Council member and the attorney who represented the family of Otto Zehm in the civil lawsuit against the Spokane Police Department,  says Washington state has an elaborate system for police unions and discipline. Since the cops aren't allowed to go on strike, they're given arbitrators to help mediate labor disputes.

"Most labor lawyers in Washington would say those arbitrators are very protective of individual employees," says Beggs. "That’s the reputation in Washington."

He says that arbitrators are often far more willing to overturn a disciplinary action than a regular judge would be. That's, in part, because in a normal court appeal case, an independent jury or judge has already weighed in. In discipline cases, it's often just the decision of a chief or sheriff after an internal affairs investigation.

"These arbitration reversals feel out of whack to us on the outside," Beggs says. But it's almost designed to be this way, to serve as a check on the police chief or sheriff.

"That’s why people are so passionate about true independent oversight," Beggs says.

But it hasn't just been the Police Guild who's complicated that effort, Beggs says. It's been police leadership, risk management and other city officials who have made getting that oversight difficult.