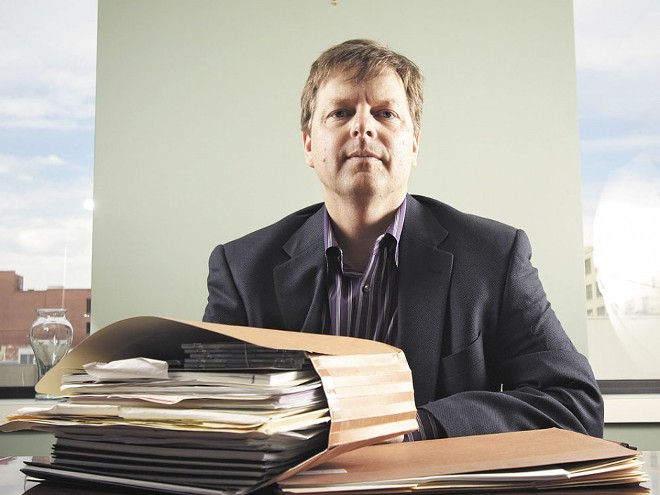 Amid the chaos that has defined the Spokane Police Department and its civilian ombudsman office over the last year, the attorney best known for suing SPD is the perfect man to sit on the council, a majority of the city council decided tonight.

By a vote of 5-1, the council chose Breean Beggs to replace Jon Snyder, who resigned in December to take a new job as Gov. Jay Inslee’s policy advisor for outdoor recreation and economic development.

He’s not only served as the attorney for the Office of the Police Ombudsman Commission, he also was the attorney, along with Jeffry Finer, who sued the city on behalf of the family of Otto Zehm, the mentally ill janitor who died after being beaten by Officer Karl Thompson.

Thompson was sentenced to more than four years in prison for violating Zehm’s civil rights and lying to investigators, and Beggs' team successfully got a $1.67 million out-of-court settlement for Zehm’s family from the city. More recently, Beggs has been active in the “Smart Justice” campaign to improve criminal justice reform.

“It’s of a paramount concern that we have that expertise on ,” said Council President Ben Stuckart. He also noted that Beggs has already been voted for by his constituents, in a way.

“ won an election when he ran for [county] prosecutor, in his district,” Stuckart said, noting that , despite losing handily in the county, had beat his opponent in the South HIll’s District 2.

“The record and the experience of Mr.  would bring a lot to the council and city,” Waldref says. “He’s shown he’s been very influential in responding to citizens and the community.”

Councilwoman Karen Stratton suggested that, when it comes to the law enforcement issues, he “knows the players…. and knows where the bones are buried.”

Only Councilman Mike Fagan, the sole conservative on the council, voted against Beggs. He cited Beggs' support for Envision Spokane, the ordinance that even the liberal Stuckart condemned as a potential disaster for the business community.

And considering how the ombudsman commission collapsed this summer, Fagan said Beggs should some responsibility for its failure. “I felt Mr. Beggs could have done something and said something, which could have resulted in a different outcome,” Fagan said.
In his interview with the council last week, Beggs suggested he would quit the ombudsman commission and in order to focus on his new job on the council.

Asked what the biggest priority for District 2 was, he readily named criminal justice reform.

“A year ago, I doorbelled most of Council District 2 and talked to people about criminal justice reform. I believe that is the highest priority for everyone I’ve talked to,” Beggs said. “Criminal justice takes about half the city budget. Despite spending all that money, people don’t feel safe. We see a revolving door of people going in and out of jail.”

He returned to criminal justice reform when asked to describe the ideal future of Spokane a decade from now.

“On criminal justice, we will have totally changed up what criminal justice looks like, not only in the but in the city,” Beggs said. “We’ll be saving a lot of money that we can invest in other initiatives. … We will have restored the relationship between the city and the police department.

As far as the relationship between Mayor David Condon and the council, Beggs suggested the council should take an active, aggressive role.

And in case you think that Beggs, a pretty liberal guy, can’t find common ground with conservatives, he noted he grew up with one parent who was a hippie and the other an Evangelical Christian.

“The underlying value of caring about people is the same,” Beggs said.

It's special election day in Washington, Spokane picks new council member and other news to start your day