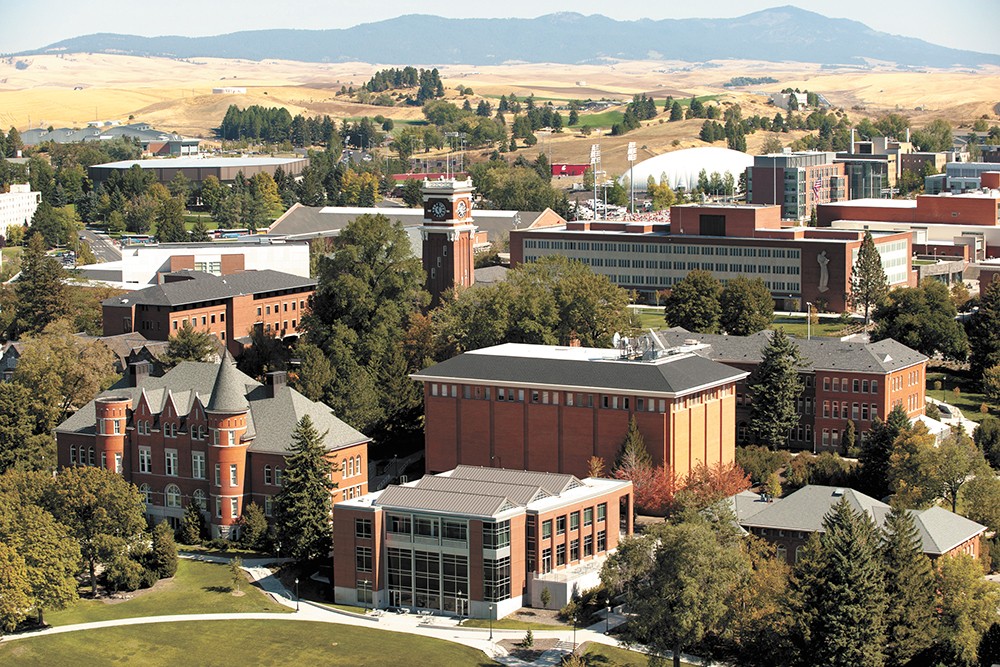 The university, still reeling from a budget deficit that drained most of its reserves, chose Montoya after a lengthy nationwide search. In Montoya, WSU found someone who not only had experience in university leadership roles (most recently at Oregon State University), but who was also an expert in innovation strategies. Starting Aug. 1, she would work closely with WSU President Kirk Schulz to shape the direction of the university and oversee academics.

"When we hired Mitzi, we wanted a change agent," says Greg Crouch, chair of WSU's faculty senate and a part of the provost search committee.

But Montoya didn't last two months as provost. Instead, university emails involving President Schulz — obtained by the Inlander in a public records request — describe how Montoya was met with swift resistance as she raised questions about the administrative structure and budget at WSU.

In a message days before she stepped down, she sent Schulz an email summarizing the feedback she'd received during a performance review.

"I learned that there are major concerns about me — I need a personality transplant, I need to be more feminine and conforming in my communication style, and I need to be less intelligent," Montoya writes. (She declined comment when contacted by the Inlander, referring questions to a WSU spokesperson.)

The email, first reported by the website Whitman County Watch, prompted Schulz to authorize an external review contracted through the state Attorney General's office looking at how Montoya was treated during her short time as provost and whether administrators exhibited gender bias. And it has faculty questioning whether the WSU administration has been transparent.

Meanwhile, additional emails the Inlander obtained offer insight into how Schulz managed Montoya as she described the opposition she encountered. In a message weeks into her new job, Schulz urges Montoya to "approach meetings with folks in listening mode" and reminds her that despite the challenges WSU faces, "they all don't need to be fixed immediately."

Then, he says he had faced similar "weirdness of WSU" when he arrived from Kansas State University in 2016.

"About 80% of WSU was nearly identical to K-State — but the other 20% was different and can be downright bizarre at times — including people's perception of reality," Schulz writes. "I have had to 'ease' people towards the 'actual' situation several times which seems frustratingly inefficient — but is a bit of the culture here."

Schulz, through a university spokesperson, declined to comment for this article.

'SHALL I CONTINUE APOLOGIZING'

The correspondence between Montoya and Schulz often revolves around WSU's satellite campuses, which include locations in Spokane, Vancouver, Tri-Cities and Everett. Under WSU's model, each campus chancellor reports to Schulz but not the provost.

Montoya had concerns about that model, emails show. One of her first moves was to have Craig Parks, who she made WSU's vice provost for system innovation and policy, conduct an analysis that looked at other top institutions with multiple campuses. The 15-page white paper — finished in November — found "considerable duplication of administrative functions and services" across WSU's campuses.

While other universities either give more autonomy to its satellite campuses or they centralize services, the analysis found, WSU operates as a sort of hybrid unlike any other top university.

"The root cause of our problems is that we have misaligned governance, misaligned control of budget and competing administrations," Montoya writes to Parks after seeing a draft of the paper in September.

It would be the root cause of many problems Montoya faced as provost, too.

Montoya expressed to Schulz her concerns over administrative structure, emails show. In one August email to Schulz, she references WSU Spokane Chancellor Daryll DeWald, suggesting that either he should be fully enabled to manage the campus, or the provost's office should be.

"The split/misaligned model is confusing to everyone at every level, and this confusion is playing out daily," she writes.

Records indicate that Montoya and DeWald butted heads almost as soon as she took over as provost. That's evident by a message Montoya sent Schulz last August, in which she says she received a round of feedback from Jean Frankel, who WSU hired in 2018 as a consultant to coach administrators.

"Just got a lot of feedback and coaching from Jean that I need to work on my communication style, specifically that I hurt Chris and Daryll's feelings," Montoya writes, likely referring to Chief of Staff Christine Hoyt and DeWald. "The feedback was focused on how my values are not aligned, and that I talk too much, etc."

"I got the message and will work on fitting in better," she says.

That's when Schulz discusses his own challenges when starting at WSU. After referencing the "weirdness" of the culture, Schulz ends the note complimenting Montoya for being able to come across like she's been at WSU for years, adding, "I am glad you are here and we are going to do great things! Don't get too frustrated by any of this."

Yet Schulz has his own frustrations having to do with the Everett campus, records show. In an Aug. 28 email, he writes an eye-opening message. Everett, he writes, hasn't added any academic programs since the day Schulz started there in 2016. He points out that "I didn't create this campus — but I certainly want it to be successful." He then adds, "I am super happy to engage in any kind of process on what we can do to Everett. If this comes across as me being tremendously frustrated — it is because I am. I just want something to happen."

Montoya uses the opportunity to again call for better alignment throughout the WSU system.

"I'm excited about the consensus on frustration because that usually signals readiness to change," she tells Schulz.

But weeks later, Montoya finds herself in another position for which she'll apologize. When discussing possibly adding new positions at the Spokane campus, Montoya evidently sends the thread to deans. The records don't reveal exactly which deans were included, but she writes a note of apology for doing so, saying her intent was only to discuss difficult budget issues openly, and that "if my comments or who I included caused problems or hurt feelings, I sincerely apologize." When a WSU vice president tells Montoya to include others in the apology, Montoya seems irritated.

"Shall I continue apologizing. Just checking on my role here," she asks Schulz.

That weekend, on Sunday, Sept. 22, Montoya has another feedback session with Frankel, the consultant. It's then that Montoya says she learns she needs to be "more feminine." And significantly, Frankel indicates that Schulz won't make any changes that affect the chancellors on satellite campuses "in any way," the email says.

"It seems I need to quickly stop a lot of projects," Montoya says to Schulz. "I think the conclusion is that I am not a fit for what you need here."

The next day, she sends Frankel a link to a book called In Defense of Troublemakers: The Power of Dissent in Life and Business. It includes a note written by Montoya: "The core message of this book is not that we should create dissent, but that we should permit dissent and embrace it when it is present, even if we don't like it or agree with it, because it will increase the quality of our decision-making process," Montoya writes.

By the end of the week, Montoya steps down.

In a letter to campus — approved by Montoya before it's published — WSU announces on Sept. 26 that the new provost would "return to the WSU faculty." Schulz describes it as a mutual agreement, but offers no reason for the demotion.

It's not until the Whitman County Watch website publishes emails roughly six months later that faculty members start to get an idea of what happened. Crouch, the faculty senate chair, tells the Inlander that he immediately sent the link to other members of senate leadership when the article came out. They spoke with Schulz that night, and Crouch says Schulz quickly agreed to commission an external investigation into the matter.

"I have a tremendous amount of respect for Mitzi Montoya," Crouch says. "I think she's a very competent person. I think she identified problems really quickly."

Yet Schulz isn't necessarily the one to blame here either, Crouch says.

"I think it's fair to say that faculty has a great deal of respect for Kirk as well," he says. "I don't think he's the villain here."

Still, the faculty is upset with the lack of transparency. During a faculty senate meeting last week, Joe Compeau, a clinical associate professor, questions the timing of the investigation.

"Would we be having an investigation if that article didn't show up in the Whitman County Watch?" he asks.

It's a troubling pattern at WSU, he says.

Crouch says the faculty now wants everything to be made public as soon as possible. That, he says, is the only way they'll get answers.