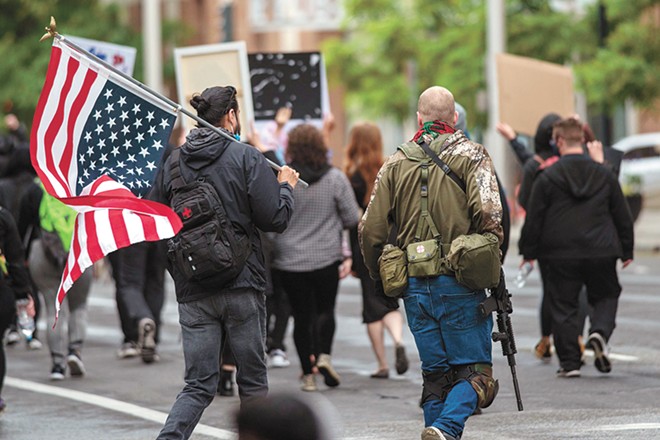 Daniel Walters photo
An armed citizen during a protest in downtown Spokane.

It was the evening before the 2020 election, and with the potential of civil unrest looming, some members of the Spokane City Council were worried.

"I have received enough emails from citizens who are truly afraid to be out tomorrow night, on election night, because they don't feel safe," Councilwoman Karen Stratton says.

After all, the racial justice protests over the past few months, in Spokane and across the country, haven't just involved clashes between police and unarmed protesters. There have also been private citizens with guns — patrolling the streets, keeping an eye on demonstrators or claiming to be protecting businesses against looters. Some of them, like those wearing camo and surveilling a June Black Lives Matter demonstration in Spokane, have identified themselves as official members of the Lightfoot Militia. Others represented themselves as from more loosely defined armed groups in the militia movement like the Three Percenters.

Councilwoman Stratton says she doesn't have an issue with people who own guns, but this was different.

"I do have serious issues with those people who carry guns, who come down to our downtown core and other areas to intimidate and frighten people," she says.

Back in June, Spokane Mayor Nadine Woodward, the City Council and other local elected officials issued a statement that they "oppose the presence of armed vigilantes roaming the streets of our city."

Similarly, while Police Chief Craig Meidl defended the rights of citizens to open carry in public during protests, he also pleaded for them to leave their weapons at home. In the months since, clashes between armed protesters and counterprotesters in place like Portland and Kenosha, Wisconsin, have left men dead.

On Monday night, the Spokane City Council considered a resolution that went further in condemning the presence of "armed militia groups," but it didn't pass any new laws.

That's because, the non-binding resolution argued, it already is illegal for armed private militia groups to march with firearms in Spokane.

For more than a century, there has been a state law that appears to ban most civilians from organizing or parading together in public with firearms. But it's a law that hasn't been enforced in Spokane or anywhere else in the state in recent history.

Yet the council voted 6-1 to ask law enforcement to start enforcing the law, though law enforcement officials have publicly questioned how they could enforce such a restriction.

"When people don't feel safe, we have to step up," Stratton says.

ANCIENT LAWS
It isn't just Washington that has an anti-militia law on the books. Almost every state has a version of it. And there's plenty of legal precedent justifying it.

In 1879, a German citizen militia leader named Herman Presser was charged with violating an Illinois state law after leading a troop of 400 armed men through the streets of Chicago. His case went all the way to the U.S. Supreme Court, which concluded that the state's law banning private paramilitary organizations didn't violate the Second Amendment.

Washington, like Idaho and every other state, has similar laws limiting paramilitary activity. Washington's law has evolved over the years, however. The 1943 version banned citizens from organizing together in an armed military company, but made an exception for clubs who wanted to carry around swords. Still, the law bans most civilian groups from associating "together as a military company" to "organize or parade in public with firearms."

In fact, Council President Breean Beggs points out, the very same section of Washington's state Constitution that protects the right of individuals to bear arms in self-defense also bans individuals or corporations from organizing an "armed body of men."

"I could spend all day running down the number of militia plots or militia violence this year alone."

A few decades ago, these sorts of anti-militia laws were occasionally used, says Devin Burghart, executive director of the Institute for Research and Education on Human Rights, a nonprofit that tracks far-right groups. In 1981, he says, the Southern Poverty Law Center used a Texas anti-militia law on behalf of Vietnamese fishermen who wanted to stop the Ku Klux Klan's paramilitary training activities.

But since Burghart started tracking right-wing groups in 1993, he says, communities have rarely enforced those anti-militia laws. Even with all the controversies involving anti-government groups in the '90s — the era of the Ruby Ridge standoff, the Waco siege and the Oklahoma City bombing — those laws weren't being used.

The issue, Burghart speculates, was that many of the activist groups fighting extremists "were narrowly focused on white supremacy and hate groups and the Aryan Nations." With the growing influence of groups like the National Rifle Association, activists may have not wanted to pick a fight with the gun-rights movement by taking on militias in general.

That could be changing. Three militia groups were successfully sued for unlawful paramilitary activity after the infamous 2017 "Unite the Right" rally in Charlottesville, Virginia. And today — with news that Michigan militia members plotted to kidnap a governor while Kansas militia members wanted to blow up a mosque — Burghart thinks that more people are waking up to the potential threat that armed and unaccountable groups pose.

"I could spend all day running down the number of militia plots or militia violence this year alone," Burghart says.

DEFINE 'MILITIA'
"It's been around for a long time," Meidl, the police chief, says about the state's law prohibiting marches by armed groups. During his comments in a committee meeting on Monday, he defended militias against the notion that they were all white supremacists and was skeptical of how enforcing the law would work in practice. "We did some poking around last week. There's no department [in the state] yet that has enforced this."

That makes things difficult for the police. There's little in the way of guidance for how the law should be enforced or what burden of proof to apply.

"If we see individuals out there, and they have rifles and camouflage gear, is that an element of being a militia?" Meidl asks. "What we're trying to figure out is how do we ensure that we are honoring the rights of individuals, First Amendment, Second Amendment, freedom of assembly, freedom of association" while still following the state prohibition against armed groups, he says.

That's why City Councilman Michael Cathcart, who explicitly condemned white nationalists and violence and intimidation during Monday's meeting, declined to support the resolution. There's not enough clarity, he says.

"There are just too many questions at this point in time, none of which have been answered very succinctly or clearly at all," Cathcart says.

In a legal analysis, Spokane County Prosecutor Larry Haskell noted that the law still allows for "recognized militia organizations of this state" to parade in public with firearms. State law divides militias into the organized militia (the state National Guard) and the "unorganized militia," a sweeping term that literally includes every able-bodied man over 18.

Haskell argues that even if a militia is "unorganized," they're still "recognized." It's that rationale that groups like the 63rd Battalion Washington Lightfoot Militia use to justify their existence in a state like Washington.

But a Georgetown Law analysis of Washington state law stresses that only the government can activate an unorganized militia. Citizens can't just decide to start armed paramilitary patrols by themselves.

"Even if you are unorganized and not a specific military regiment, you are still under governmental authority," Burghart says. "You don't get to play private army, full stop."

Still, if the city starts cracking down on these groups, that worries local Second Amendment supporters like Tanner Rowe. He argues that militias, like gun owners, vary. Some are shady, but most aren't bad people.

He was open-carrying a pistol during the protests in downtown Spokane, but he was marching in solidarity with the Black Lives Matter cause. He says he knew people armed with rifles who stood outside downtown businesses at the businesses' request.

"I did have businesses that asked me to come down and help," Rowe says, declining to name the businesses. "I did not."

But he argues that carrying guns in these cases were meant as a deterrent, not an intimidation tactic.

"The guys that were downtown, the city said that they were vigilantes, that they were down there causing unrest?" Rowe asks. "Which one of them broke windows, tagged buildings, tried to break into somebody's store?"

It wasn't the armed citizens, in other words, who caused the damage during the protests.

Yet the downtown business community officially endorsed the council's resolution.

At the meeting Monday night, Mark Richard, with the Downtown Spokane Partnership, enthusiastically supported the ordinance. He says that the DSP was taking this as an opportunity to fervently dispel the damaging and false rumors that they'd solicited help from armed groups.

"We feel it's clear that the presence of groups of individuals with long rifles did in fact intimidate and impede people's ability to access their freedom of expression," Richard says. "It looks as though gatherings of this type may be illegal. And I have to wonder if it isn't for situations just like this — so that people aren't intimidated from being able to express their views." ♦