More than three years after being filmed in Spokane, Knights of Badassdom makes it to theaters 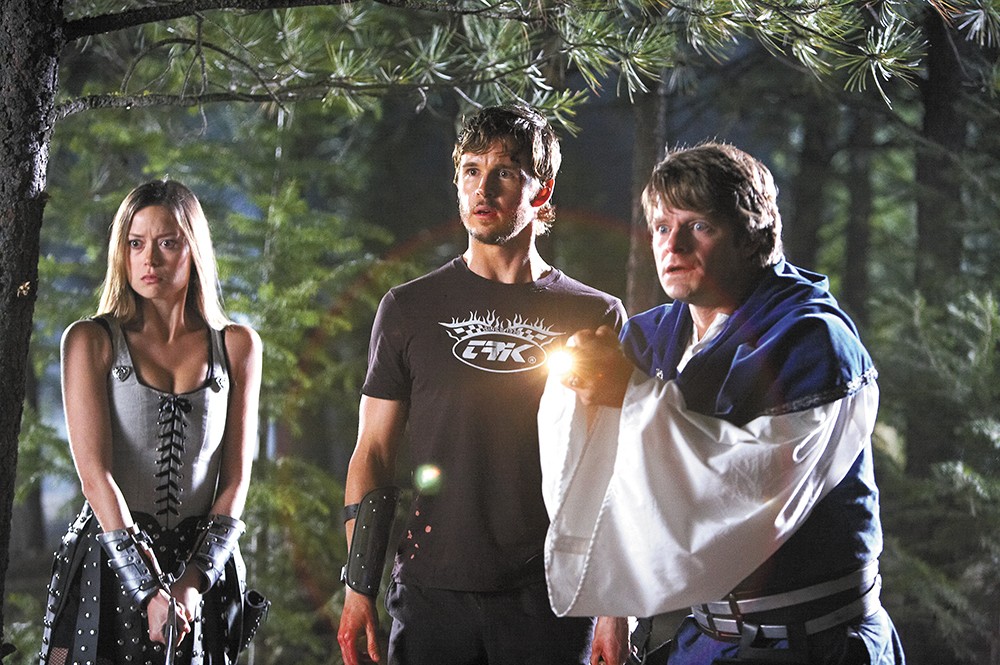 Local film industry professionals and actors, extras on set and LARPers (live action role players) near and far are rejoicing this weekend as the fantastical comedy horror film Knights of Badassdom hits theater screens. Starting with a couple of sold-out showings at River Park Square's AMC cineplex, the film is also set to open at the Magic Lantern Theater this Friday.

Several delays in production and distribution have kept the Spokane-made film, shot during the summer of 2010, from a more timely public release. After landing distribution rights through international distributor Entertainment One last summer, the long-anticipated film was finally on its way to a limited theater and video-on-demand release.

The film focuses on three best friends, two of whom, Eric and Hung, respectively played by Steve Zahn (Treme) and Peter Dinklage (Game of Thrones), are very active in the LARPing community. LARPing is essentially "Dungeons and Dragons" taken to a fully immersive level of dress, speech and acting, with fake weaponry and a scoring system. After their friend and roommate Joe goes through a bad breakup, Eric and Hung haul the non-LARPer, played by Ryan Kwanten (True Blood), to a multi-day LARPing festival called the Battle of Evermore, set in Riverside State Park. There the group accidentally summons a succubus, aka a blood-sucking demon, which takes the form of Joe's ex-girlfriend. Joined by Summer Glau (Firefly) as the hot, kick-ass LARPer girl Gwen, and her cousin Gunther, Joe, Eric and Hung must figure out how to defeat the evil monster as it devours their friends and fellow LARPers.

Spokanites involved in the project — from executive producer Rich Cowan at North by Northwest studios to local Renaissance and medieval enthusiast Alex Mickschl, a film extra and costuming contributor — couldn't be more excited to finally see Knights on the big screen.

"It was a long wait to be sure and a lot of us, you know, were thinking that it would either never see the light of day, or be a really bad, direct-to-DVD kind of movie that no one would watch," Mickschl says.

Though Knights of Badassdom has been long awaited by locals who worked on set, and equally so by sci-fi fans, its message may be lost on others. Aside from being a goofy comedy, Knights also attempts to glorify geek culture, while at the same time parodying the slasher film genre. Director Joe Lynch is a die-hard horror fanatic; viewers unfamiliar with his repertoire or horror comedy in general should expect to see some gore.

Mickschl is a firefighter with the Spokane Fire Department, but during his free time he transforms into a chivalrous Renaissance-era knight, decked out in full body armor atop his armored steed Percival.

Mickschl's role in Knights began with a producer's scouting call to the Spokane Tandy Leather store, where he frequently buys supplies to make medieval armor and accessories for himself and his wife Tara, as well as friends. Producers invited him to work as an extra in the film after learning Mickschl is also active in the Spokane Renaissance Faire. He was also hired to contribute some costumes and props used in the film, including pieces worn by its leading actors.

On the phone during a break from his post at Spokane Fire Station No. 16, Mickschl excitedly explains that one of the leather arm braces he fashioned for Dinklage is being given away through an online fan contest.

But the item Mickschl made that he's most excited to see on the big screen is the leather satchel used by Zahn's wizard character to tote around a book of spells. It plays a critical role in the film, since one of the spells it contains conjures the evil demon succubus. Mickschl also made some of the leather armor worn by Glau.

"It was pretty amazing for me, being able to physically work with these sci-fi icons," Mickschl says. "The actors were very friendly, normal people, so it made it easy to work with them."

Aside from its stars, the film's cast and crew list on IMDb.com reads almost like a who's who of Spokane film professionals. About 100 Spokane-based crew members and local actors worked on the project, says co-producer Cowan.

"I'm thrilled it's coming out," he says. "I saw an earlier cut in L.A. in postproduction and I was pretty happy with it. I think it's going to be kind of a sleeper hit — it's a fun film to watch." ♦