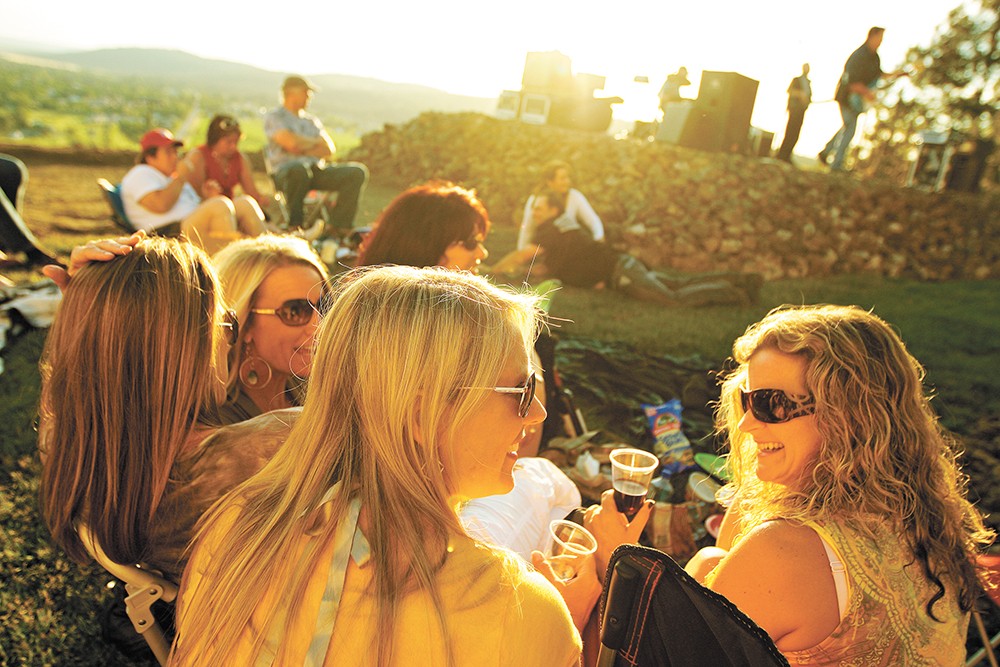 We've been writing an awful lot about

summer music festivals, and it seems like there are more now than ever. But a lot of those events — as great as they can be — are prohibitively expensive and miles away. Want to stay in town and still enjoy live outdoor music? No problem. Here are some local places to catch weekly music series throughout the summer; all are free and all ages unless otherwise noted.

One of the most scenic places in Spokane, Arbor Crest's Cliff House Estate is hosting intimate live music — both acoustic and full-band performances — starting at 4:30 pm on Thursdays and Sundays through August. Among the artists slated to play: Son of Brad (June 28), Sammy Eubanks (July 15), Karrie O'Neill (July 26), Ron Greene (Aug. 16) and Tuxedo Junction (Aug. 19). Admission on Thursdays is just $5 and $10 on Sundays. These shows are 21+ only. arborcrest.com/summer-concerts

If you're a Kendall Yards regular, the weekly Night Market is surely part of the reason. As soon as the weather becomes agreeable, the market takes over the neighborhood every Wednesday night between 5 and 9 pm, and there's always live music to enjoy. The ongoing "Rock the Nest" series typically showcases local singer-songwriters, but you can also check out bands like alt-country quintet the Powers (June 20), the hip-hop fusion of the Flying Spiders (July 18), the folk-rock ensemble Trego (Aug. 8) and the diverse covers catalog of the Rub (Aug. 29). kendallnightmarket.org

Manito Park is celebrating the season with free live music at its mainstay Park Bench Cafe on Friday nights starting at 6 pm. The series continues this week with Wyatt Wood (June 15). The roster is filled out by the likes of Blue Water Strangers (June 22), Flight Risk (July 20) and Just Plain Darin (Aug. 10). See the Manito Park Facebook page for more details.

Coeur d'Alene's Riverstone Park starts its free outdoor concerts on July 5, and they continue at 6 pm on Thursdays through the summer. They've got a little something for everybody: showtunes with Coeur d'Alene Summer Theater (July 5), Americana with Hillary Scott (July 19), classic R&B with Nu Jack City (July 26), classical repertoire from the Coeur d'Alene Symphony (Aug. 9) and blues-rock favorites with the Zach Cooper Band (Aug. 23). artsandculturecda.org/summer-concert-series ♦