A selection of local beers, ciders and wintry cocktails that to make your winter wonderful 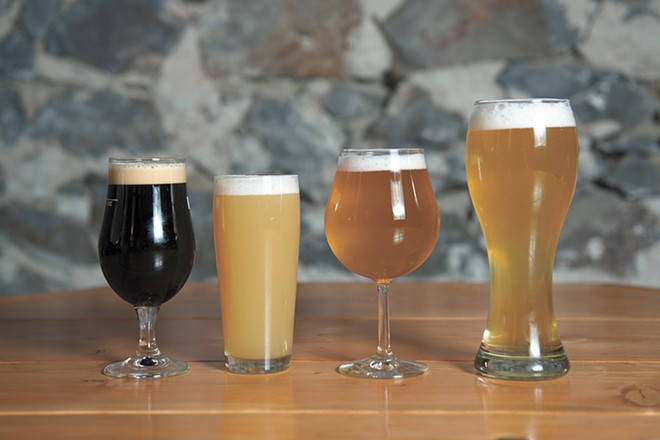 One of the most crucial elements of the holiday season is the food — the ham, the turkey, the mashed potatoes and gravy, and all the other fixings. It wouldn't be Thanksgiving or Christmas without those traditional dishes, and the communal atmosphere that they inspire.

But if you're going to splurge on a hearty, nap-inducing meal, it only seems right that you'd want to pair it with a similarly decadent alcoholic beverage: a creamy ale, an acidic cider, or an aperitif that pulls all the seasonal flavors together.

When you're looking to fill your glasses in the coming months and want to keep it local, here are a few new releases, special batches and seasonal favorites from local breweries, cideries and distilleries.

BELLWETHER BREWING CO.
This local beer spot, founded a little over five years ago in the Emerson-Garfield neighborhood, has already gained a reputation for its innovative flavors that come in small batches. As far as their holiday-related offerings go, consider the new Nightshade braggot (a variety of mead made from barley malt and honey), which is described on Bellwether's social media as "the V8 of beers." Don't believe that? Consider the list of ingredients, which includes heirloom tomatoes, avocado honey and jalapenos, so it has a kick of spice to it that'll keep you warm as the temperatures start to plummet. And at 9.4% ABV, it should keep you plenty toasty. Bellwether is also rolling out a new red ale with the J.R.R. Tolkien-inspired name of Red Book of WestMarch, and a glass of its malty, caramel-y goodness would be best enjoyed while roasting around an open fire.

WHISTLE PUNK BREWING
Whistle Punk's basement tasting room is one of the cozier downtown locales, the perfect hangout for when you want to bundle up on a cold winter's eve and imbibe a bit. The brewery just dropped a hazelnut brown ale that should pair well with falling leaves and crisper weather, and Thanksgiving will bring about a new batch of their popular Festivus Ale. Named, of course, for the Christmas alternative made popular on Seinfeld, the holiday IPA was concocted a few winters ago as a tribute to a famed Sierra Nevada beer called Celebration, but it has built its own following. Also, keep your eyes peeled for a scotch ale brewed with maple syrup, which will certainly make your holidays all the merrier.

ONE TREE CIDER
This local cidery really leans into the holiday spirit, and we're all the better for it. Among their seasonal releases is a cranberry cider, which should pair perfectly with any traditional Thanksgiving meal and has all the puckery tartness of a bottle of Ocean Spray. (If you opt for the alcoholic version, stay away from skateboards if you're inclined to re-create that popular TikTok video.) One Tree also has a signature flavor called Snowglobe, which starts selling in November. With notes of berry and cinnamon, it tastes like they somehow bottled the very essence of the holidays. But what makes it truly special is the food-grade glitter that falls like Christmas morning snow inside the bottle. Winter wonderland, indeed.

COCKTAILS
As far as cocktails go, Post Falls' Up North Distillery has a series of apple-flavored cocktails on its menu, including an apple pie mimosa and an applejack old fashioned, both of which complement any number of fall flavors. Lil' Sumthin, the western-themed saloon, has pivoted to delivery and to-go orders in lieu of in-person clientele, and their menu is overflowing with delicious craft cocktails perfect for this time of year — maple-based hot toddies and old fashioneds, and pumpkin martinis. But the most seasonal of the lot is their Carrizo cider and maple old fashioned, which is not only rounded out by cider spices and cinnamon but has the option of being served inside a mini pumpkin and delivered right to you. You really can't get more seasonal than that. ♦

The original print version of this article was headlined "Seasonal Sips"