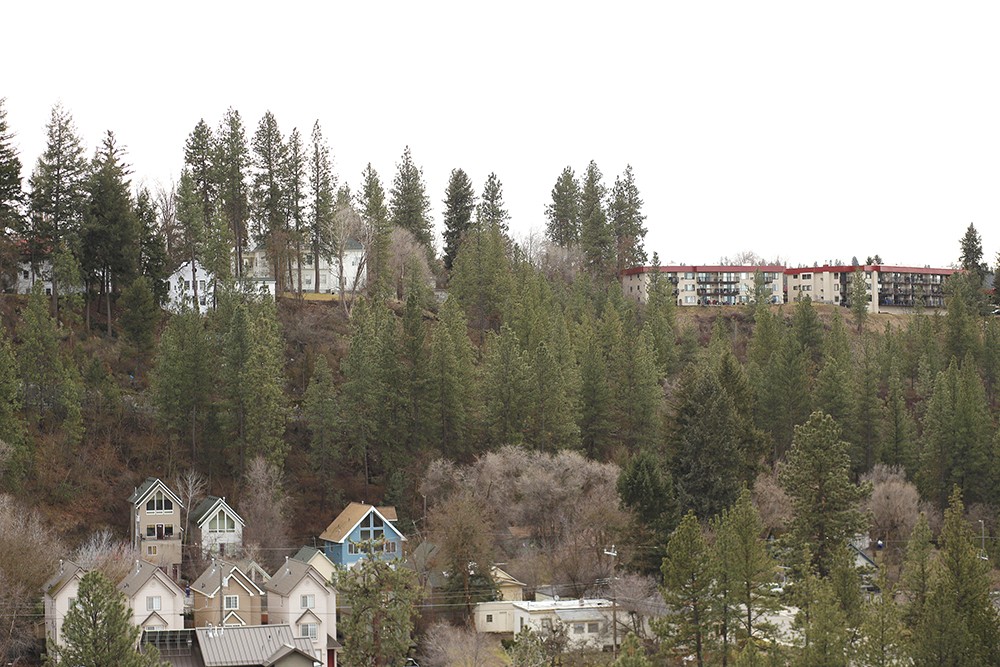 Young Kwak photo
The Forest Commune project would include four houses on the hillside above Riverside Avenue to the western edge of Browne's Addition.

How do you build something new in historic Browne's Addition without raising hackles?

Not building near stately mansions helps. Not building on a site that involves a steep slope concerning to uphill neighbors is better. And it's probably ideal to avoid building near the site of a historic tribal burial ground that was discovered during construction for another development in the 1980s.

As he tells it, Asher Ernst really didn't think his project would be controversial this time.

Unlike the modern Pacific Northwest-style townhouses he built near Coeur d'Alene Park in 2017, which replaced a historic house that would've been too costly to upgrade, his new project at the western edge of Browne's Addition wasn't going to be replacing anything historic.

Dubbed the Forest Commune, the plan is to build a house for his family, another house for his wife's parents, and eventually put in two other homes for friends who went in on the project with them.

The land rises from 2443 W. Riverside up the hill nearly to the corner of First Avenue and Poplar and has a few plateaus that hadn't proven feasible for previous attempts at development, which ran into opposition over views and other issues. To Ernst, it seemed just right for the four homes.

But neighboring property owners, including dozens at the Ridge Condominiums at the top of the hill, are skeptical.

The slope of the site is concerning for some, as they worry excavation work downhill from their properties could destabilize the ridge underneath their homes.

Ernst says a geotechnical survey was done, showing the homes will be fine going in on the plateaus.

"To be honest we have a couple folks that are looking for any and all things they can do" to stop the project, Ernst says. "I think it got blown out of proportion by some folks."

But with the slope at 30 percent or more on some parts of the site, attorney J. Scott Miller, who represents about 100 Ridge condo owners, says there's legitimate reason for concern, even with the geotechnical report.

"The geotech says — at least as I understand, I'm not an engineer — if you do the right soil stabilization, then it can be safe. But then I've had engineers tell me you can build a skyscraper in a swamp, the question is just how far down do you have to put the piles?" Miller says. "I'm not sure that concerns are gone. I'm sure people are being attentive. They just want to make sure their homes are safe."

It's not just the slope that has some of the neighbors concerned. Perhaps more significantly, the site is near a known tribal burial ground connected with the Spokane Tribe, discovered, somewhat ironically, during construction for the Ridge in 1987.

Back in September, during a hearing with the city, Ernst was urged by the Spokane Office of Historic Preservation to do a cultural survey before starting any work.

The office cited Spokesman-Review articles and photos from February 1987, which show the accidental discovery and further archaeological dig finding remains from at least three to five bodies during construction of the Ridge (which went in where the historic Cowles family mansion and several other estates once stood).

But based on the slope of the Forest Commune site, it also didn't seem likely they'd find anything, Ernst says, so he and his partners initially opted not to have a cultural survey done.

"We are aware of the law," he says. "If you do come across anything, you need to stop."

When an excavator pulled onto the site around New Year's Day, neighbor Ron Tussey, who lives in a condo at the Ridge, says he felt compelled to reach out to the Spokane Tribe and make sure they knew about the project.

"It just bothered me on an emotional level that once again we're digging up Native American remains in the name of progress," says Tussey, a licensed mental health counselor.

Randy Abrahamson, tribal historic preservation officer for the Spokane Tribe of Indians, hadn't been notified about the project before that, and so on Jan. 6 Abrahamson sent Ernst a letter reminding him of the state and local historic preservation offices' notices to him for the "high risk of human remains" at that site. With previous notice, should someone then stumble on remains or artifacts, they could run afoul of Washington state law making it a felony to disturb archaeological remains.

As it happens, the Forest Commune site also roughly neighbors an old cemetery, from which remains were relocated more than a century ago, according to newspaper clippings from the late 1890s and early 1900s also found by Spokane's historic preservation office.

"In the case where you've been told, 'There have been burials in this area,' you should really look before you start digging," explains Spokane's Historic Preservation officer Megan Duvall. "If you choose not to do that cultural resources survey, and you find something, it's no longer considered accidental, because you've been warned."

But even with state law protecting artifacts, historic preservation offices and tribes still can't require developers to do a cultural survey before they start work.

In this case, Ernst had Abrahamson out to the site the second week of January and has since agreed to work with the tribe on a cultural survey before continuing grading work on an existing driveway.

"It's like a good opportunity," Ernst says. "We got to meet up with the tribe and we're trying to see how we could honor them."

Still, the project is an example of how tribes and archaeologists are still limited in how much they can require developers to do before building, even when it seems likely they'll find something.

"The city of Spokane is named after the Spokane Tribe, that was our wintering ground, our fishing area. It's sacred to the tribe," Abrahamson says. "So just about anywhere you dig in town you have a high likelihood of finding something. Even today under the asphalt you still find stuff."

But for projects that don't require state or federal environmental studies before being permitted — e.g., small, private developments — it can be difficult to ensure the protection of cultural resources if private owners aren't willing to work with you, Abrahamson says.

"Some of the private developments won't even talk to you, they're kind of rude," Abrahamson says. "It's really a good deal that [Ernst] gave us a survey, that was really good of him. He was concerned about the tribe's issues on remains and artifacts."

Detailed maps of archaeological sites are fairly protected, due to so-called pothunters or looters, who preservationists have good reason to want to keep away from sites.

Hundreds of thousands of relics have been looted from Pacific Northwest cultural sites over the last century, especially along the Columbia River System, Portland State University professor Virginia Butler noted in a 2007 talk.

In other cases, cities and developers may not believe there are still cultural remains under already-developed sites.

Duvall cites one of the biggest examples in Washington state when the city of Oak Harbor was warned by the state before a 2011 road construction project of the likelihood of remains in that area. But since the area had already been paved, the city went ahead and wound up unearthing a burial site with thousands of bones and bone fragments.

In 2014, Oak Harbor's insurer paid the Swinomish Tribe $1.2 million for the desecration of Native American remains, and three contractors paid another $800,000, the Everett Herald reported. The city later hired an archaeologist and contracted with other firms, spending hundreds of thousands more to ensure it had a grasp on the location of artifacts and had a supervisor for city projects.

That's why it's essential for developers to do research early and work with tribes from the get-go, Abrahamson says.

"Before you do a project, it's important to do the consultation with all the agencies and tribes to make sure it's in order before you start," Abrahamson says. "That way, it's easier going. That way, you don't have to start and stop and back up." ♦