Daniel Walters and Young Kwak photos
Mayor Nadine Woodward brought in a third party — the state auditor's office — to look into concerns that involved her former opponent, Ben Stuckart. Yet the auditors never actually talked to Stuckart during their inquiry.

Mayor Nadine Woodward and then-City Administrator Wes Crago didn't technically call it an "investigation" when they announced that they'd be hiring a third-party fact-finder at a February 2020 press conference. But while discussing "potential wrongdoing" in the city's Community Housing and Human Services department, they certainly made it sound like a big deal.

The inquiry would dig into conflicts of interest, departmental procedures, financial accountability and whether "inappropriate pressure, real or perceived," had been placed on the city staff.

Reviewers would have unlimited time and would get "whatever they need to pursue to produce a report that we all can look at and say, 'Yep, that's what happened, this is why it happened, and this is how we fix it,'" Crago told the Inlander.

The city of Spokane wants an outside investigation to review serious concerns, the precise nature of which the city won't reveal

With a pandemic raging, the Washington State Auditor's Office took almost 14 months to conduct the inquiry, and the results were finally released last Monday.

"The nature and appearance of these findings cause us some concern, and show us that we must do better," Woodward said at a press conference last week. "These findings are serious."

Some problems appeared to be the kind of bureaucratic snafus you'd expect to see in underfunded, high-turnover government offices — forms that weren't filled out, a contract that hadn't been bid out to enough companies, procedures that hadn't been formalized — but others suggested deeper issues.

The report didn't name any names, but with job titles listed, it was easy to fill in the blanks. It implicated not only former staff CHHS department directors like Kelly Keenan, but also Woodward's mayoral opponent, former Spokane City Council President Ben Stuckart. The audit suggested that both had failed to disclose a potential conflict of interest. It suggested that city staff circumvented policies and procedures because they felt pressure from directors like Keenan, who in turn felt pressured by Stuckart.

But what the report didn't do, several city council members say, was to clearly explain what happened, why it happened or how to fix it. Without knowing that, they said, it was difficult to grapple with questions of conflicts of interest and "inappropriate pressure."

"Honestly, I'm more confused now than I was before I started," Spokane City Councilwoman Lori Kinnear said at a committee meeting last week.

And she wasn't alone in her uncertainty. The Inlander asked city spokesman Brian Coddington if, after reading the report, he had an understanding of what pressure had been exerted or how.

"I don't personally, no," Coddington acknowledges. But he says the point of the inquiry was more about tightening up city procedures moving forward.

But by raising the possibility of wrongdoing without actually investigating the truth, Councilwoman Karen Stratton worries that the report was trafficking in the sort of innuendo that damages reputations.

"I've never dealt with something so vague," Stratton says.

Stuckart, in a Facebook message, was more blunt: "This report is full of shit."

"The nature and appearance of these findings cause us some concern, and show us that we must do better. These findings are serious."

The audit was bound to be controversial. It treads back onto the heated terrain that defined the 2019 mayoral election to the end: It was October. The coldest months of winter were bearing down on the city's homeless population. And the city still hadn't opened a warming center.


In this environment, Stuckart says he did put pressure on Keenan. Everyone did.

But Stuckart denies he pressured the city to pick one shelter operator over another. The city was faced with a choice over who would run the shelter: the Salvation Army, the Guardians Foundation or a newcomer, Jewels Helping Hands.

By October 2019, only two of the contenders remained. The Guardians had been knocked out of contention by a slew of serious allegations — including a claim from Jewels co-founder Julie Garcia that she saw with her "own eyes" Guardians employees having sex with homeless women behind a warming center. Garcia later told the police, "I didn't see them have sex behind the building." (While Garcia has denied she was being dishonest, the Guardians sued Jewels for defamation last year and, according to Guardians director Mike Shaw, walked away with about a $75,000 settlement.)

"In the discussions with the Salvation Army, they said it would take them six weeks to get up and running," Stuckart told the Inlander that night. "Jewels says, 'Two weeks.' To us, it was a no brainer to go with the faster."

Yet state auditors also suggested Stuckart had a "potential conflict of interest," noting that the city had previously labeled Jewels "high risk" due to an "unclear relationship" with the organization's fiscal sponsor, the Smith-Barbieri Progressive Fund. Stuckart had received $4,000 during his 2019 mayoral run from the fund's co-founders, Don Barbieri and Sharon Smith, and had participated in a contract review process involving Jewels.

Stuckart and Smith both scoff at the suggestion that there was anything improper. Smith was never a Jewels board member like the auditors contended. She was a donor who provided financial oversight. She didn't profit when the organization won the city-contract. 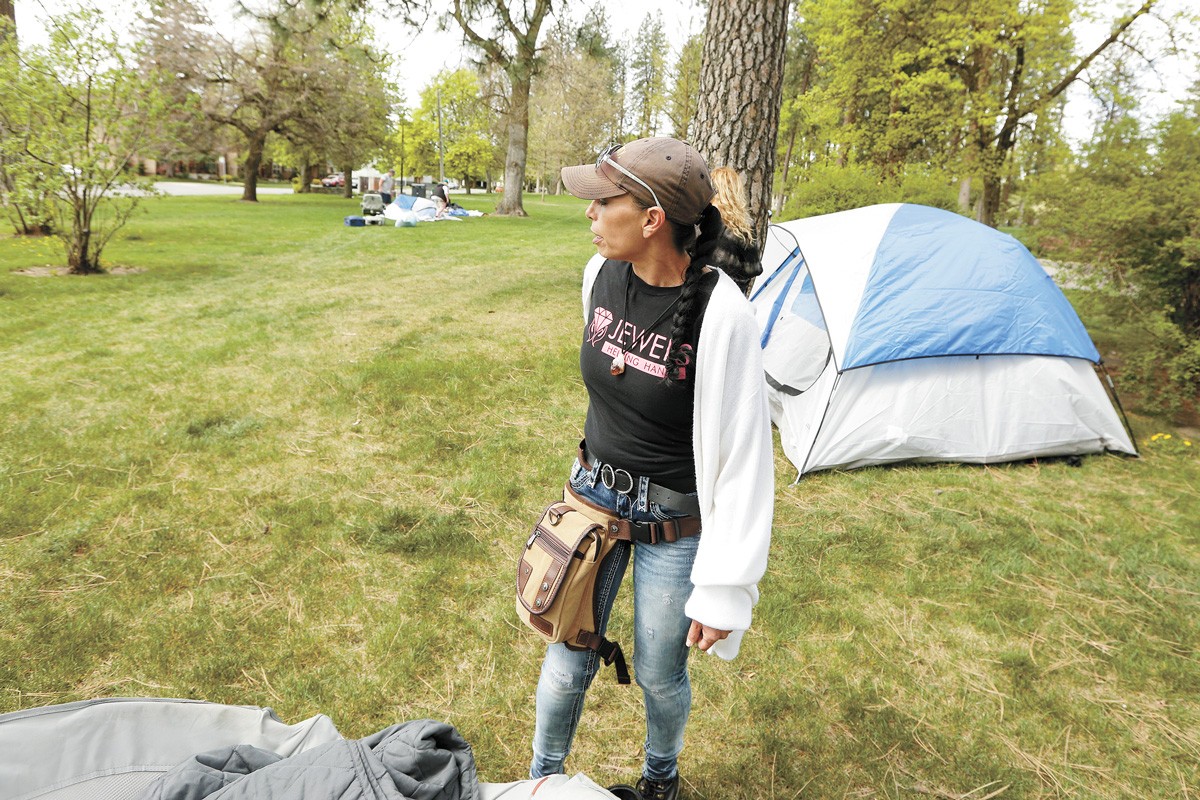 Young Kwak photo
Jewels Helping Hands co-founder Julie Garcia has ardent supporters like progressive activist Sharon Smith, yet Garcia has quickly become one of the most controversial names in the homeless outreach community.

The other two shelter applicants had also been labeled "high risk," according to public records.

But that doesn't mean Smith or Barbieri didn't have influence. After all, Stuckart says he considers Sharon Smith one of his mentors. He runs things by her. Stuckart says he stopped by Smith's place in late August 2019, not just to seek out a donation, but to commiserate about his poor performance in the mayoral primary. Smith says she has definitely sought to persuade city officials.

"We hound them," Smith says. "Both the city and the city councilmembers."

Smith was more than just a donor — she's one of Jewels' most enthusiastic champions, sometimes intervening on their behalf with the city.

"We would have to pick up a phone or send an email or, in some cases, even hired an attorney to help break through the logjams," Smith says.

She also criticized its competitors. In January 2019, records show, she sent Stuckart, Kinnear and Councilman Breean Beggs an email concerned that, despite city policies, the Salvation Army would start "imposing their values" on a homeless shelter, saying "we hope they will be audited."

She put in records requests to dig into the Guardians' finances. When Jewels co-founders Julie Garcia and Jason Green met with Councilmembers Stuckart and Kate Burke and others in 2019 to unspool a series of allegations about the Guardians, Smith and Barbieri attended, too.

Smith chuckles at the idea that she has any significant influence over city politics, saying that Spokane would look a lot different if she did.

Still, she says that her and Barbieri's wealth means people were more willing to listen to them.

"Unfortunately, money is power," Smith says. "That's the way it is."

That tension is exactly why Stuckart tried, unsuccessfully, to push for public financing of local election campaigns while he was in office.

"If you're going to get elected, you've got to raise money," he says. But raise money, and you also raise eyebrows, as people assume that the donations are buying your vote.

AT LEAST ONE SIDE TO EVERY STORY

Yet even councilmembers like Stratton who are unsatisfied with the audit's answers think that some of the questions it raises are worth considering.


The state auditors pointed to Keenan's current job with another major nonprofit, Catholic Charities, as another potential conflict of interest. A month after Keenan left the city, CHHS awarded a $500,000 family warming center contract to Catholic Charities.

Stratton says she's sent emails to the state auditor's office on multiple occasions when previous high-level city directors have taken jobs with Catholic Charities: What happens when a person who helped direct large grants toward an organization, she asks, quits to work for that same organization?

"I just would like somebody to say it's fine, or they have to wait six months or they have to sign something," Stratton says. "But there's nothing that answers that question."

But Keenan argues in an email to the Inlander that he wasn't actually involved in negotiation with that particular Catholic Charities contract. He wasn't hired by the agency until months later.

Keenan could have told the state auditors that, but they hadn't interviewed him. If they had, Catholic Charities argued in a statement, the audit wouldn't have so many inaccuracies.

The auditors also hadn't talked to Stuckart or Smith or Barbieri or anyone with Jewels Helping Hands.

"One of your findings is that a former director was pressured by a former council member," Beggs told the state auditor's office at a committee meeting last week. "And I don't think you interviewed either one of them."

When Woodward and Crago announced the third-party audit last year, they had assured the public that only former staff members were implicated in the concerns. Yet the state auditors had only spoken to current staff members. That, Stratton argues, was unfair to those whose names had been tarnished by the report. 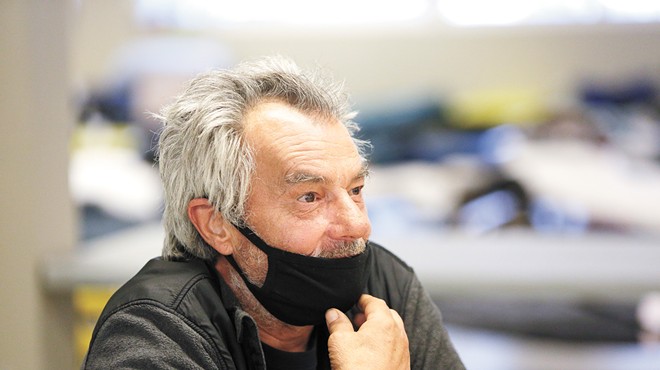 "There are people who have left this city," Stratton says. "It's affecting them, their professional life."

While Coddington says the city didn't know the audit wouldn't interview central subjects of the report, state auditor's spokeswoman Kathleen Cooper says they "had a clear understanding with city leadership about what our role was."

Cooper pushes back against the Inlander's contention that getting to the truth required reaching out to the people accused of potential wrongdoing. With their focus on process and documentation, Cooper suggested that wasn't necessary.

"I would challenge you to examine your assumptions that an audit report is supposed to have the same standards as a journalistic report," Cooper says. ♦