Three shy, unassuming guys are redefining what it means to be metal in Spokane. 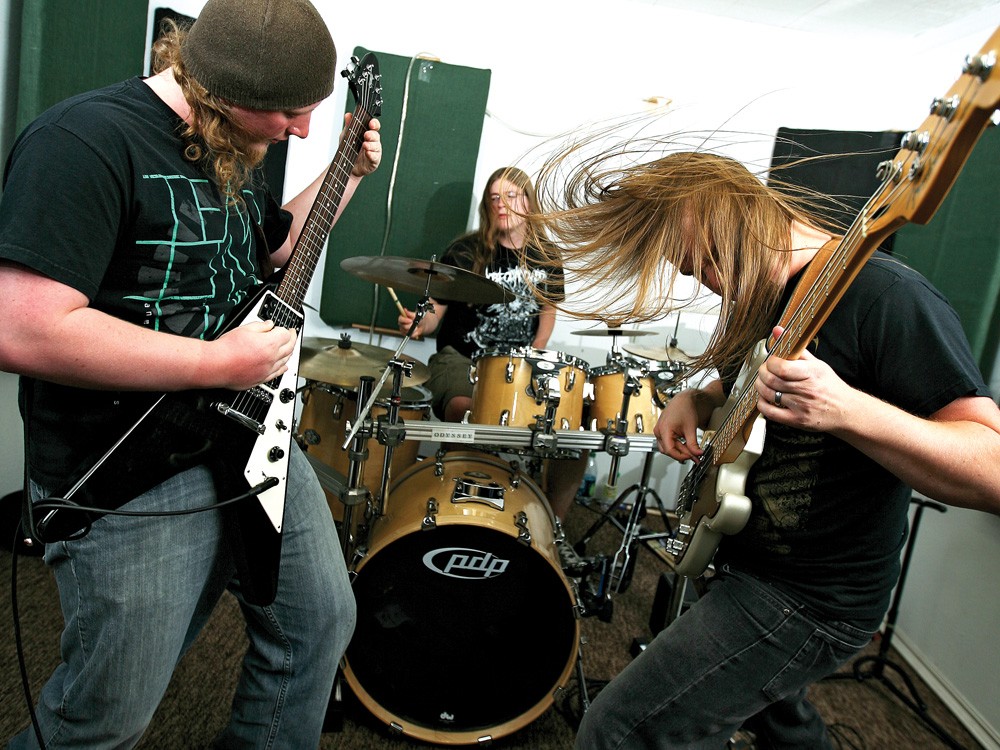 Inside a practice space hardly bigger than a closet, eloquent bass lines and melodic guitar riffs stairstep up and down, shaking the windows of the tiny upstairs room. Sometimes it is loud enough outside that homeless people stop and cheer.

Cables and guitar cases — held together with duct tape — litter the floor where the three-man instrumental metal band Odyssey practices, lit only by a strand of twinkle lights hanging behind the drum kit.

The band dips in and out of harmony — the constant drums bringing their technical sound back together again.

“We never decided or set out to have an instrumental trio that plays progressive metal,” says bassist Jordan Hilker, 25. “We just started jamming and we saw how much noise three people could make. And we liked that.”

Odyssey is made up of Hilker, his younger brother and drummer Lukas, 23, and guitar phenom Jerrick Crites, 22. They play metal that is all at once brutal, technical, and melancholy. And they do it intentionally without a vocalist. The trio use their instruments to express emotion that feels both calculated and spontaneous.

“Our music forces people to analyze the music in a different way, because we have nothing to hide behind,” Hilker says. “The audience doesn’t have that vocalist distracting them or preaching some message.

With us, it’s just three guys up there, with one of each instrument, doing the best we can.”

Don't be fooled by Odyssey’s metal exterior. The band has picked up crazy musical chops, but they’ve managed to maintain some of the innocence of high school. They still work day jobs at the library, in a produce warehouse, in a photography studio, and cleaning houses. And their long blond hair still gets caught in chewing gum, guitar strings and fans.

All self-taught, they started jamming in 2006. Things just clicked. “We were jamming together for months and we weren’t sure what [Jerrick] was thinking,” says Lukas. “It was kind of awkward.”

“It was like asking a girl on a date: ‘Does he want to be in a band with us?’” Jordan says, almost finishing his brother’s sentence.

Five years later, the band has developed a loyal following of metalheads in Spokane.

Their 2009 debut album, Objects in Space, and their 2010 EP, Schematics, are the accumulation of years of trial, error and experimentation.

Their latest album, An Abstract Existence, is fluid and mature. Without the brutal vocals typically associated with the genre, the guitar riffs and crashing symbols move to the forefront.

As a result, the music is quite beautiful — albeit heavy — and poetic. The tracks are driven by nimble chord progressions and arranged, almost like a sonata, with three to five distinct movements, ranging from lightning-fast to slow, with articulate time signatures.

“Not having a vocalist just opens a lot of doors for us,” Hilker says. “It frees us up so that we don’t have to stick to the standard formula of songwriting that goes verse, chorus, verse, chorus, bridge.

The band realizes that playing instrumental metal makes them more of a musician’s band, and that the likelihood of getting signed to a major label and crossing over into mainstream success is slim.

And they’re not ready to pick up any gimmicks. Besides, they can’t afford a crazy light show.

But they don’t seem too concerned.

“On some level, we are conscious of writing for the listener, but we’ve never written a song and wondered, ‘Oh, will people enjoy this one?’” Jordan says. “Our main goal is to write songs that we ourselves would enjoy listening to.

“Odyssey is just a great journey, and for us that’s what this band is. It’s just us discovering our musical potential and sharing that with people, hoping they will listen.”