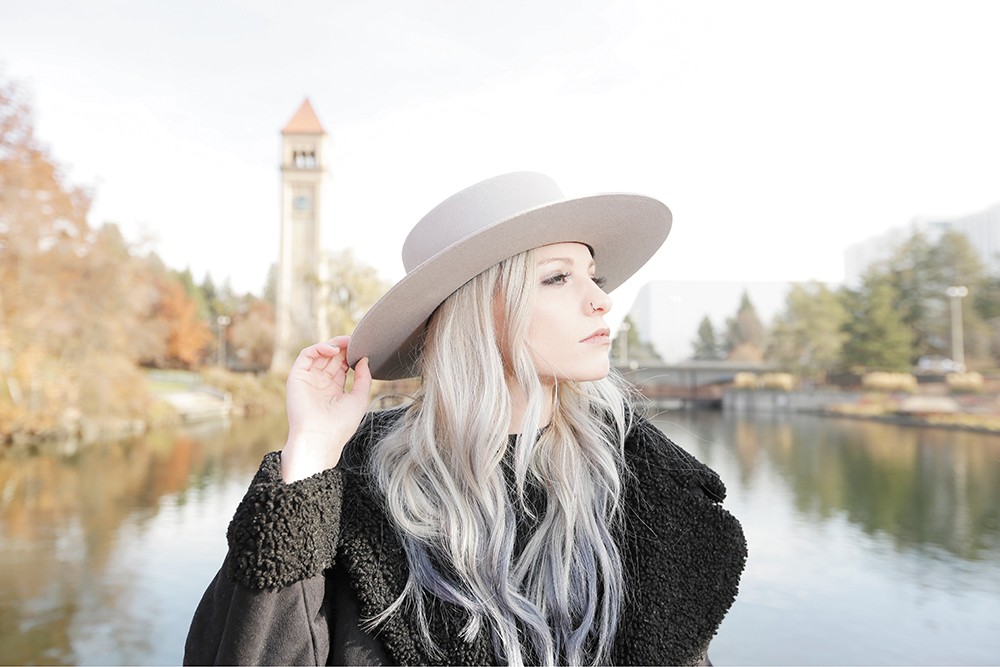 If you saw Spokane musician Cami Bradley as a contestant on America's Got Talent back in 2013, you saw a 25-year-old singer-songwriter known for plaintive arrangements of pop standards. If you followed her career beyond TV, you're surely familiar with the Sweeplings, the folk-pop duo she founded with Alabama singer-songwriter Whitney Dean.

And if you happen to see her performing Christmas classics, including selections from Glenn Miller's Nutcracker Suite, with the Spokane Jazz Orchestra on Dec. 7, you'll no doubt be blown away by her old-fashioned vocal prowess.

But now that she's 31, Bradley wants to be known for more than just her stint on the small screen.

Under the new moniker of Carmen Jane — her given first and middle names — she's producing music that's more adventurous and experimental than anything she's done before. Bradley describes the new sound as "dark pop," and says that she was probably channeling the gothic electronics of Billie Eilish when she first went into the studio. But it's still gestating.

"I'm loving it, Bradley says. "It's the first time I've felt fully me in music."

Bradley is still based in Spokane, but she's regularly pinballing back and forth between here and Los Angeles, where she's still feeling her way through the complicated machinations of the music industry. She's also still making music with the Sweeplings, and they've reached a wide audience because their songs have appeared in commercials and on TV series like Pretty Little Liars and The Vampire Diaries.

But that's just one of many musical irons that Bradley has in the fire. In a corner of Atticus on a busy Saturday afternoon, she has a brief respite before flying back to L.A.; this trip will be devoted to writing new material with her younger brother Ryan, who lives there and performs blues-rock under the stage name Dirt Miller.

Bradley says she needs those professional partnerships to push her style in unexpected directions. Though she put out a few solo releases pre-Sweeplings, she says now that she was never fully satisfied with those songs once they were committed to tape: "Maybe I hadn't lived enough life or felt enough things to be as deep as I wanted. The sound was never real enough to me.

"You get into a groove — and it's a good one. But I wasn't really expanding upon how I wrote or who I wrote with," she continues. "The Sweeplings is one of the most amazing things, but it's only one side of me as an artist. And there was another side that I also wanted to get out there."

Carmen Jane is different. It feels a bit more grown-up, more sure of itself, moodier and edgier than anything she's done before. The acoustic hush of the Sweeplings has given way to slinky synthesizers and club-ready beats, and while Bradley's powerful voice is still at the center, it's almost unrecognizable from the more delicate intimacy of her previous solo work.

As a project, Carmen Jane has been a collaboration with producer Nico Rebscher, who had an international hit co-writing Alice Merton's jittery pop song "No Roots." Bradley has traveled to his native Germany to write and record with him, and she says their connection was almost immediate.

"I've always had in my head what I wanted it to be and could never get someone to understand," Bradley says. "The first chords [Nico] played on the piano was, 'Yes, that's exactly what I'm talking about.' And he's really good at pushing me beyond my limits."

She doesn't want to be defined by her time on America's Got Talent, but she's also aware to know that her career would look a lot different if she hadn't been given that kind of national platform. Bradley was an unassuming audience favorite during the competition show's eighth season, eventually taking sixth place amongst a pool of thousands of performers. She didn't take on a recording contract immediately after her run on the show, which is usually de rigueur for newfound TV stars, and she has no regrets about it now.

"There's a subsidiary of the music industry that's made for cover bands and reality stars," Bradley says. "You can be successful in that for sure, but I'm coming back into the L.A. world fresh and with a new name, so people don't tie me to that. I definitely don't have regrets now that I'm dipping my toe back into it, and realizing that it was a smart decision."

Cami Bradley will perform with the Spokane Jazz Orchestra on Sat, Dec. 7, at the Bing Crosby Theater (901 W. Sprague) at 7:30 pm. Tickets start at $25 and are available at spokanejazz.org.

The original print version of this article was headlined "Key Change"