On the face of it, the legacy of Jerry Quinn Sr. is simple. He will forever be known locally as the man who saved Spokane's clock tower when Havermale Island got a makeover for Expo '74, which also birthed Riverfront Park as we know it. Nearly 50 years ago, Quinn made headlines for organizing the group, Save Our Stations, which helped dissuade the powers-that-be from destroying the clock tower. And in October, Quinn was again honored as such by Mayor Nadine Woodward with a public ceremony and a plaque commemorating his efforts to be placed on the tower.

Quinn never actually set out to save the clock tower, per se, although he says he's glad the iconic structure has endured. Rather, Quinn was more interested in two massive railroad depots: the Great Northern, and the Union Pacific station, located just across Spokane Falls Boulevard (which was then called Trent Avenue).

But by the early 1970s, efforts to radically revamp Spokane's railroad yards, particularly those located in what would become Riverfront Park, were in full swing. Longstanding complaints varied: The railyards bisected the city, they contributed to traffic woes, they cut off the view of the falls, and they were loud and dirty.

The idea of a World's Fair required the removal of tracks and trestles, however, and though Quinn was on board with Expo, he opposed removing the depots.

"The stations would have made Riverfront Park a 12-month park," says Quinn, who envisioned refurbishing them, somewhat like the Intermodal Center – Spokane's 130-year-old depot used now for rail and bus transit.

But when citizens were asked to support saving the depots, the answer was a resounding "No," according to the definitive work on Expo '74, The Fair and the Falls, by William T. Youngs. "The voters turned down the levy measure to support preservation by three-to-one margin, and they defeated the levy measure to support preservation by six-to-one. As a concession to history, the fair builders decided, however, to retain the old Great Northern clock tower." Vern Johnson, who headed the committee to oversee construction of the World's Fair, recalls in the book that "the 'railroad buffs' were at him constantly and he felt that something had to be retained." So he presented the concept of saving just the clock tower to the board, and they agreed to do that.

Photo Courtesy of Jerry Quinn
Jerry Quinn (left) founded Save Our Stations, which is credited with saving Spokane's iconic clock tower from demolition prior to Expo '74; Completed in 1902, (above) the Clock Tower is 155 feet tall, and clock faces are 9 feet in diameter. The clock is still wound once a day.

For Quinn, the driving force behind saving the rail depots was trains, which had fascinated him since his boyhood in New Jersey.

"I was infatuated with history, railroads, like what's on the other side of the mountain," he says, letting the names of railroads roll off his tongue: Wabash, SP&S, Norfolk Southern.

"Where would we be without trains?" Quinn asks rhetorically, noting that a 100-car train carries the equivalent of 400 to 600 over-the-road trucks.

"Spokane would be a fishing village at best," says Quinn, who first visited the city in 1966 on his honeymoon with his wife, Alice, who died in March of 2021.

Their cross-country journey left a lasting impression on Quinn. "I had my nose against the glass the whole way," says Quinn, who recalled marveling at cattle cars and the North Coast Limited train's "vista dome" car.

Quinn fell in love with Spokane – its manicured lawns, the wide-open spaces – and returned with Alice in 1967.

While Alice immersed herself in theater, including Spokane Civic Theatre and Valley Repertory Theatre, which she founded, Quinn took a job with Soderberg & Cleveland Advertising Agency.

Advertising and design is another of Quinn's legacies, a holdover from the nine years he spent with New Jersey's Bergen Evening Record, working his way up from delivery boy, to copy and layout, and what would now be called graphic design.

But Quinn was also a go-getter. By 1969, just a few years after arriving in Spokane, Quinn and two other employees took over Soderberg & Cleveland, now known as QUINN Agency, and run by Quinn's daughter, Bonnie Quinn-Clausen.

In addition to working in advertising, Quinn maintained his interest in the region's railroads. In 1970, he joined the recently formed National Railway Historical Society's local chapter, called the Inland Empire Railway Historical Society (now the Inland Northwest Rail Museum near Reardan), and served as president for a time. One of the group's first big projects involved restoring a Union Pacific locomotive, which they'd relocate to the Spokane Interstate Fairgrounds in 1978. 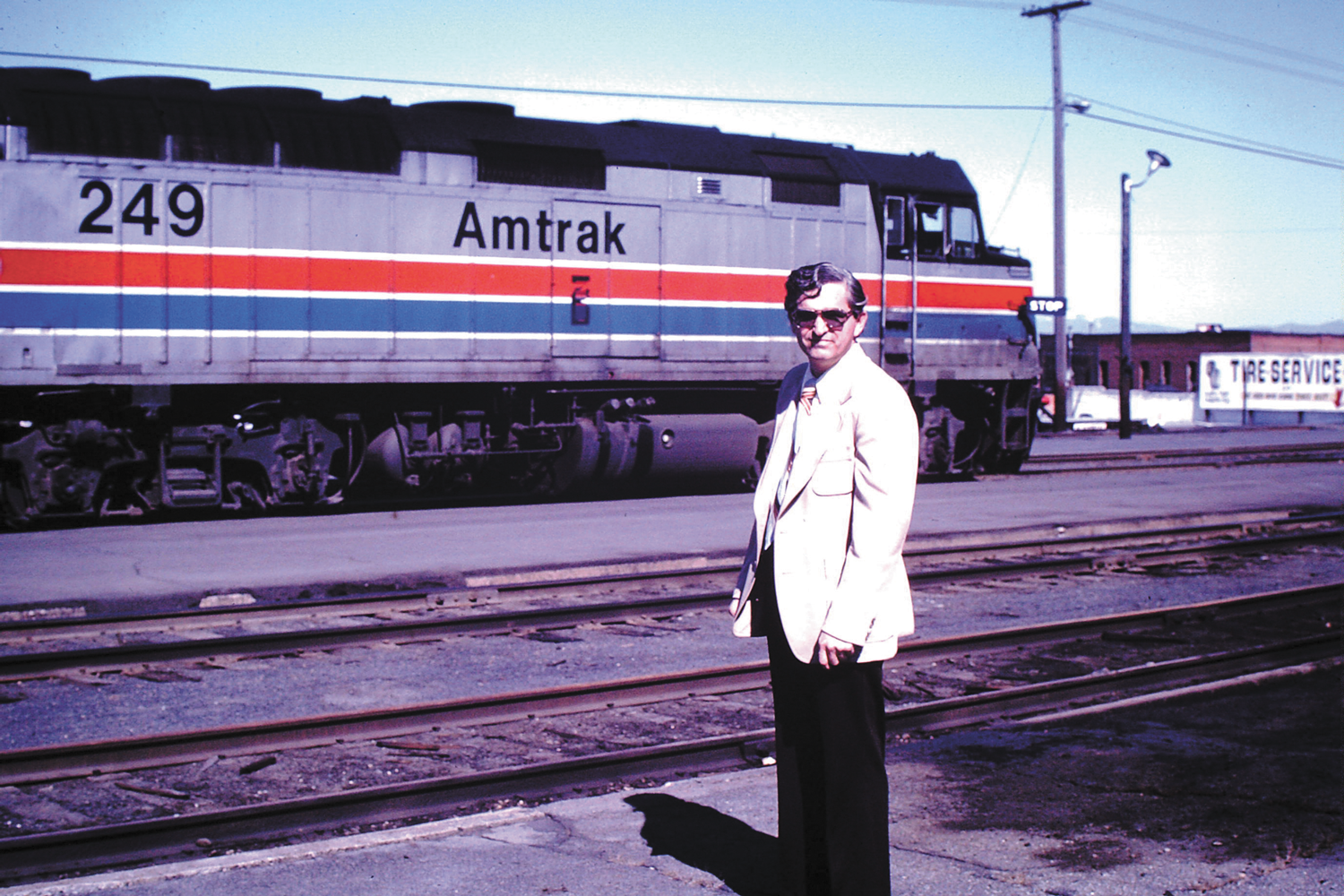 Photo Courtesy of Jerry Quinn
With his love of trains going back decades, Jerry Quinn posed in the 1970s with an Amtrak train in Spokane.

In 1980 he joined River City Modelers — one of a half-dozen Spokane-area model railroading organizations that have come and gone in the past 15 years.

Since 2008, Quinn has been active with the Evergreen Railroad Modelers, serving as president for 10 years; he and a dozen model enthusiasts chipped in $500 apiece to get going. The club rented and remodeled a modest Greenacres storefront, filling it with an elaborate display accommodating three distinct rail lines. Trestles, tunnels, waterways, mountains, greenery, a paper mill – the layout captures the look and feel of the Northwest in exquisite detail.

The club is facing a new issue, however, with a proposed rent increase that might mean dismantling their work and trying to find a new place, says Quinn, whose wheels are turning as to how to preserve the club's legacy for the future.

Quinn is mulling many options, including turning the club into a nonprofit. Given enough time and his propensity for figuring things out, it's likely Quinn will find a solution.