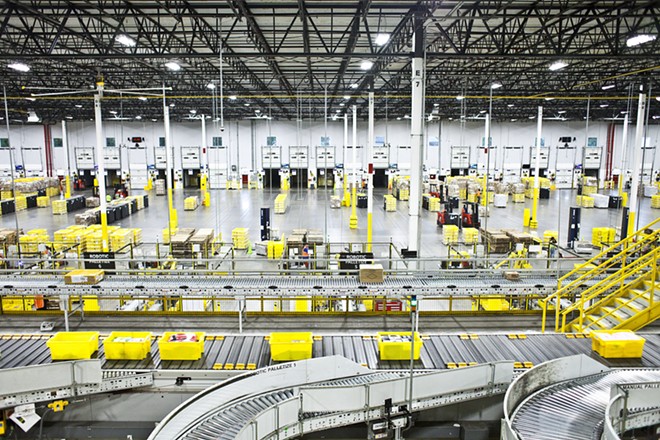 Bryan Anselm/The New York Times
An Amazon warehouse in Florence, N.J., Aug. 29, 2017. Amazon has become the second American company to cross the once-unimaginable line of a trillion-dollar market valuation. The company now captures 49 cents out of every e-commerce dollar in the United States.

SAN FRANCISCO — When Apple’s market value crossed $1 trillion last month, the reason was simple: It makes devices that a lot of people are willing to spend a lot of money on.

Now Amazon has become the second American company to cross that once-unimaginable line. Its founder and chief executive, Jeff Bezos, is worth nearly as much as Bill Gates and Warren Buffett put together.

This time, the explanation is more complicated.

Amazon captures 49 cents of every e-commerce dollar in the United States. It employs more than 550,000 people and generates $178 billion in annual revenue. It sells everything from computing space to peanut butter to appointments with plumbers.

But the thing it has always sold the most — to investors, customers, the media — is excitement. Long before Amazon went to Hollywood and began making movies, it was the star of its own show, generating vast amounts of attention just for being Amazon.

Amazon’s search for a second headquarters set off a nationwide frenzy among politicians. Bezos even gamified his philanthropic plans, taking to Twitter to solicit advice about what he should do. Would Amazon collapse, or would it eat the world? It was the corporation-as-reality series, and it’s been a long-running hit.

Take Amazon’s drone-delivery program, which it first announced on “60 Minutes.” Roughly a million features were written about Amazon and its drones, nearly all with the subtext: Isn’t this the coolest thing ever? Even if the drones do not pan out, they have kept attention focused on the company.

“There is no doubt anymore,” said Ron Nussbaum, who runs an investment management fund called Maverick Value in Los Angeles. “The stock always goes up and no one doubts it will keep going up.”

Apple had profits of $48 billion last year. Amazon’s were less than a tenth of that. If profits were all that mattered, Amazon should be worth about $100 billion.

Even before Amazon hit $1 trillion, there was a poll on Facebook run by a group of young Wall Street investors. The question: Would Amazon or Apple be the first to hit $2 trillion?

The vote was overwhelmingly in favor of Amazon. Dreams will always triumph over devices.