Amazon to raise minimum hourly wage to $15 for all U.S. workers 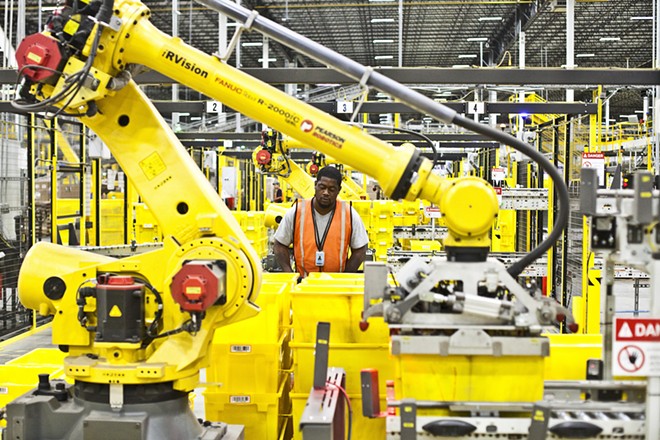 (Bryan Anselm/The New York Times)
An Amazon employee works alongside a robot at the company’s facility in Florence, N.J., on Aug. 29, 2017. In a move that could win favor in Washington but cut into profits, Amazon will raise the minimum wage for all of its employees in the United States to $15 an hour, it announced on Oct. 2, 2018.

SEATTLE — Even Amazon can get squeezed by political pressure and a tight labor market. The online giant on Tuesday said it would raise the minimum wage to $15 an hour for all of its U.S. workers.

It said the pay increase would include part-time workers and those hired through temporary agencies. The company said it would also lobby Washington to raise the federal minimum wage.

Amazon said the new wages would apply to more than 250,000 Amazon employees, including those at the grocery chain Whole Foods, as well as the more than 100,000 seasonal employees it will hire for the holiday season. It goes into effect Nov. 1.

The company had previously said the average hourly wage, including stock and incentive bonuses, for full-time workers at the fulfillment centers was more than $15 an hour, but it had not disclosed pay for part-time and contract workers.

Amazon has come under increased scrutiny for the wages and conditions of its workforce, particularly at the fulfillment centers where it packages and sorts orders, and with the contract drivers who make last-mile deliveries. Some workers at the grocery chain Whole Foods, which Amazon bought last year, have recently made a push to organize a union.

The company plans to announce the location of its second headquarters before the end of this year, and the new site, which Amazon says will eventually employ 50,000 highly-paid workers, is widely expected to get what could be billions of dollars in tax breaks and other incentives from state and local governments. The size of the potential taxpayer payout, and the secrecy around the bidding process, have frustrated even some lawmakers in cities hoping to land the headquarters.

“We listened to our critics, thought hard about what we wanted to do, and decided we want to lead,” Amazon’s chief executive, Jeff Bezos, said in a statement. “We’re excited about this change and encourage our competitors and other large employers to join us.”

The federal minimum wage has been set at $7.25 for almost a decade, though more than 20 states and cities have higher wage floors. In 2014, Amazon’s hometown Seattle was one of the first major cities to pass a law that would raise wages to $15.