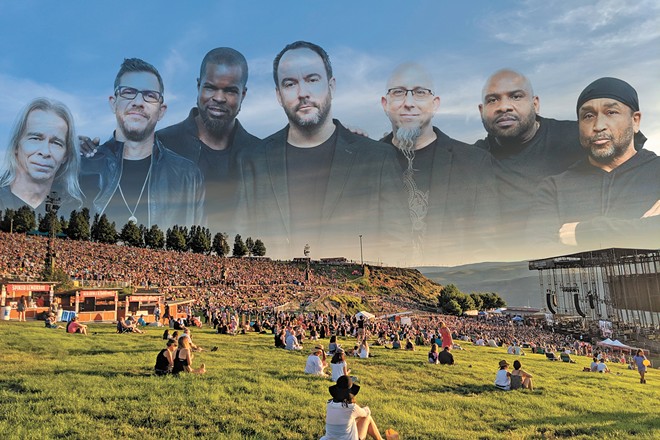 Let them come for me with pitchforks, the righteous indignant who haven't heard a Dave Matthews Band song since a three-minute radio edit in 1994, these smug experts who've never seen the band live. Welcome, those who decided that popular always equals bad, unlike, say, Prince, Beyonce or the Grateful Dead, those niche, underground artists. Cheers to those who once knew an insufferable frat guy who wore a Dave Matthews Band t-shirt and decided if that guy was a fan, it Must Be Bad™. (I assume those people also gave up beer, ice cream and outdoor sports, not wanting to be associated with things frat guys might love.) Hat tip to those for whom hating this band constitutes an identity on Twitter. Public Service Announcement: It's 2021 and no one is forcing you to listen to music you don't enjoy. Let people love what they love! Repeat: Good for you, not for me!

You're getting distracted by the haters, a friend says. What do you love?

I love the genre-defying music, a blend of rock, jazz, folk, blues, pop, and more. I love the way drummer Carter Beauford's grin could power the state's electric grid. I love the camaraderie among fans, a collective feeling that there's nowhere on earth we'd rather be. I love the musicians who've shared their stage: The Roots, Preservation Hall Jazz Band, Carlos Malta, the Lovely Ladies, and this year, Mavis Staples. I love Dave's ridiculous, joyful dancing, and the way every show is different, the surprises and thrills.

Pulling into the Gorge campground for Labor Day weekend is like the beginning of any good adventure: Buckle up for weirdness and delight. After setting up camp and meeting the "neighbors," the top priority is to walk around and people-watch. Artists and makers create all kinds of wares. Two years ago, the group next to us mounted a large inflatable Homer Simpson, wrapped in twinkly lights, as a beacon guiding them back to their camp after each night's show. Music, the magnet that drew us all together, can be heard from different directions all day, every day. Throughout the weekend, we chat with visitors from other states and countries, cook for a crowd, sing along to what's on the radio three campsites over, offer a beverage. We float on the river, eat hot dogs in the rain, talk politics, play catch, frisbee, bocce ball or card games. We converse, face to face. We connect.

How many times have I seen Dave Matthews Band live? The truth is, I don't know. There are fanatics who record every show, keep albums of every ticket stub; people who can predict which song is next based on the position of Dave's hands on his guitar or the percentage of times a song has been played so far on tour. That's never been my vibe. I first saw Dave Matthews Band live in 1997, and I loved it. Since then, I've gone as often as I could. In 2001, DMB created a three-night run at the Gorge, which became a Labor Day weekend tradition. I've been to Dave with high school friends, college friends, grad school friends, and friends of friends. I've gone alone, with colleagues, with a partner, with best friends. No matter what, every time, I feel a combination of happiness and gratitude. I feel convinced that maybe I can keep going. I'm able to laugh, play, take stock.

How many shows? All I know is that I've probably seen Dave Matthews Band live more times than the total number of concerts some people have ever attended. Every one brought me some measure of joy.

Unfortunately, concert tickets for large touring acts can be expensive. Paying outrageous ticket fees and wildly overpriced concessions is a privilege, even if one is sleeping in a tent and making meals on a campstove all weekend. But each year that I've been able to afford tickets, split the camping pass, and buy enough gas to get there and back, those few days are precious, a time and place where I can truly relax. All year, I look forward to attending an outdoor concert perched on the edge of a canyon last carved 50,000 years ago by glacial flooding, and then sleeping on the ground in a grass field, surrounded by scablands, where sometimes the wind whips so hard that it bends your tent as far as it will go before breaking. I love every moment.

Some find it baffling, seeing one band so many times. I might, too, if I were you. It helps to understand how the band itself has changed over time: saxophonist Leroi Moore was killed in a tragic accident, while violinist Boyd Tinsley was kicked out of the band. Rashawn Ross (trumpet), Tim Reynolds (electric guitar), and Jeff Coffin (formerly of Bela Fleck & the Flecktones) all joined the band circa 2008. Others have rotated in and out. The band has over 200 songs, plus live covers and other unrecorded material, which means every set at the Gorge is quite different. In one sense, the experience is akin to re-reading a favorite novel. Each time you revisit the work, elements of the story will strike a different emotional chord than in the past. This isn't because we're bad readers; it's because we are different, in ways big or small, every time we approach the work. We have changed; our minds and hearts have taken in new experiences. Hearing certain songs played over the years is similar. It's true that a published book is final; the words don't change between readings. But with music, specifically DMB's improvisational style, the songs themselves shift and change; the core remains but there is so much play, creating opportunities for every band member to riff, solo and shine. As with jazz, you can hear a song many times yet never hear the exact same song.

Multiple studies have found that as people experience live music, regardless of genre, the brain waves of crowd members synchronize, which increases feelings of social connectedness and altruism, in addition to activating individuals' emotions, intellect and physical movements. There's unquantifiable magic, too: The view, the acoustics, the crowd, the experience of dancing to DMB in sunshine, twilight and under the stars. If you've never seen Dave Matthews Band live, it's possible I sound like someone selling yoga or health supplements or religion. (I would never.) But what I can tell you is this: When you enter the venue, there's a moment at the top of the hill, past the food vendors and merch booths, when suddenly you have a 180-degree view of the Gorge. The deep blue of the river, the windmills across the canyon spinning slowly, the craggy basalt cliffs, all enveloped in a warm, late-summer glow. Music floats up from the stage, a prelude. Every time, I pause and soak it in. The immensity resets my perspective, reminds me what a blip humans are in the timeline of the universe. How lucky am I to be here, to experience this, to still be alive? I can't believe that we would take this for granted. It's part of the soundtrack of my life. I wouldn't have it any other way. ♦