Gonzaga Prep alum Anne McClain always dreamed of going to space, and now she can 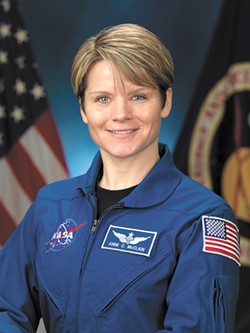 She learned long ago how to function without sleep.

That skill was learned at West Point, where cadets pushed through the week and made dates with their pillows on weekends. Last Friday, after just arriving home in Houston from a weeklong astronaut training in Alabama, Anne McClain admits she's tired. She says she can sleep later.

The 36-year-old Senior Army Aviator, who became a certified astronaut in July, comes back to her alma mater, Gonzaga Preparatory School (class of '97), this week. It's a place she remembers fondly, where she played softball and excelled in math. She'll share her inspiring journey with students and talk about the importance of math and science as it applies in reality, not just equations on paper. (Unfortunately, the events aren't open to the public.)

McClain knows her story is out of this world. You have a better shot at making it to the NBA or New York Philharmonic than becoming an astronaut. As a plucky 3-year-old, McClain had figured out her career ambition. In kindergarten she wrote a short book about how one day she'd be an astronaut — a book her mother, Charlotte Lamp, who still lives in Spokane, has proudly held onto.

She says that harboring such a lofty career goal means dedicating yourself to it over and over.

"I've had to remake that decision about 100,000 times to get back on track," McClain says. "I'm not the smartest or brightest. But I kept making the right decisions."

That meant staying home from parties to study and taking more classes. That meant never backing down, even if there were setbacks.

McClain, whose entire résumé and list of military decorations could take up pages of this paper, graduated from West Point and also holds master's degrees in aerospace engineering and international relations. She served in Iraq. She's played on the USA Rugby Women's National Team. She has a partner and 2-year-old son. She says the films The Martian and Gravity are highly entertaining, even if unrealistic.

Nearly four years ago, she got the chance to apply for the 21st NASA astronaut class. Out of 6,300 qualified applicants (mostly scientists, engineers, pilots and doctors), she rose through the interview process. The final 100 were invited to the Lyndon B. Johnson Space Center. Meeting the other interviewees, there was an instant connection.

"You're the oddball with the childhood dreams still," McClain says. "But here, there was a common dream. It was so cool to meet these people who were so like me."

Put through a series of rigorous physical and mental tests and team building exercises, McClain recalls looking around and thinking there was no way she could measure up in this group of impressive people. Yet in 2013, she was selected as one of eight astronaut candidates.

She'll never forget the moment her life changed forever. The call came after the 14-month interview process. NASA wanted her. Right then, her knees buckled. Tears streamed down her face from relief, disbelief and unbridled happiness. Her 3-year-old self leapt for joy.

For the past two years, her team has trained underwater, high above ground and in zero gravity research facilities, mastering myriad skills. With her recent graduating class, McClain says there are now about 45 current American astronauts. She hopes to go to space soon. She says she'd jump at the chance to go to Mars. "It's only a matter of when," she says.

The fear of the unknown keeps some people up at night — but that's what excites McClain about her new job. She says NASA contributes to so much on Earth.

"The thing I like about space exploration is that it's people at their best, it's international cooperation," McClain says. "You read about people in different countries and it's bad, and yet I work with these people from those countries every day. When you're working with people at such distances, you're more alike than you are different. That's really powerful." ♦