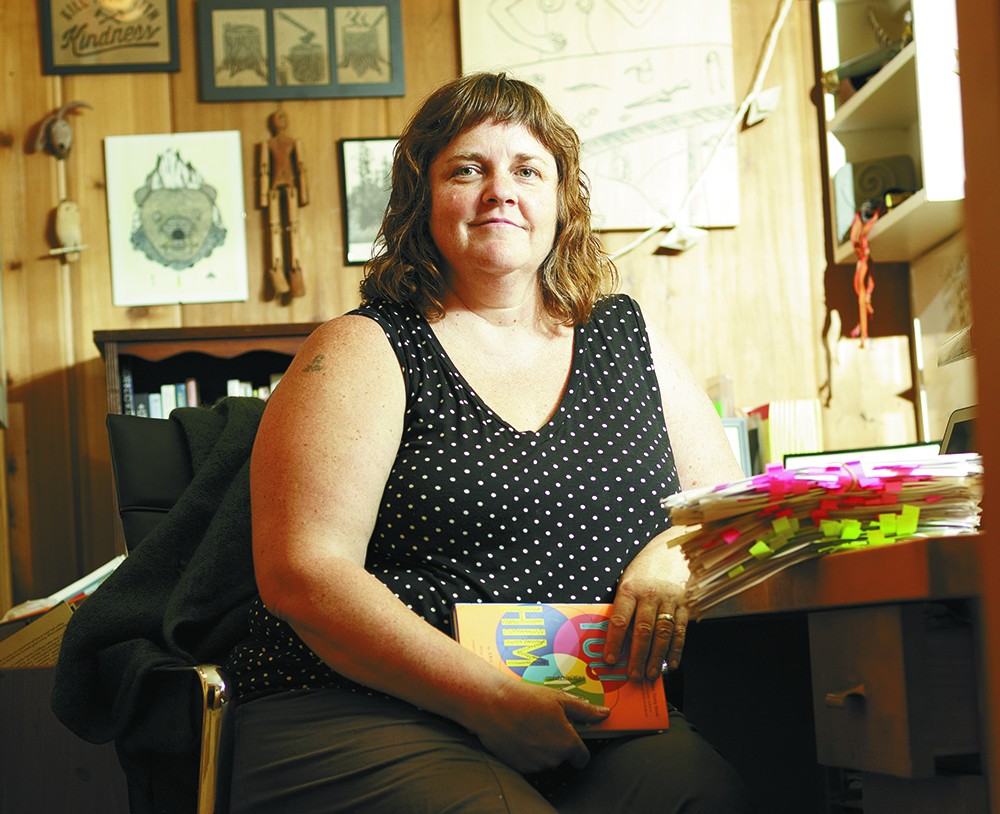 Young Kwak
Kris Dinnison celebrates the release of her book on July 7 at The Bartlett.

A fleeting thought one day

, scribbled into a journal: A girl who works in a record store.

Yet this eight-word idea, jotted among pages of to-do lists and scattered musings, was meant to be something much bigger. In the inexplicable way that the tiniest sparks of imagination materialize, these eight words from Kris Dinnison's mind painstakingly transformed into 275 pages of a novel that almost never existed.

Dinnison always wanted to write. She learned to read when she was 5, but books were just that — something she loved to lose herself in, and not something she believed she'd ever create.

So instead, she became a teacher — English and humanities — and a librarian, passing on her love of the written word in a different way to the next generation for nearly two decades.

Now, just days after her 47th birthday, Dinnison celebrates another milestone; the release of her debut young-adult novel, You and Me and Him. Birthed from that kernel of thought scrawled in a journal she's since burned, Dinnison expected it would be a story no one but her would ever know — a practice round.

"I decided I'd write that, and write the draft and not allow myself to edit," she recalls from a corner table in the bustling Atticus Coffee & Gifts that she and her husband, Andy, own in downtown Spokane along with quirky next-door shop Boo Radley's. 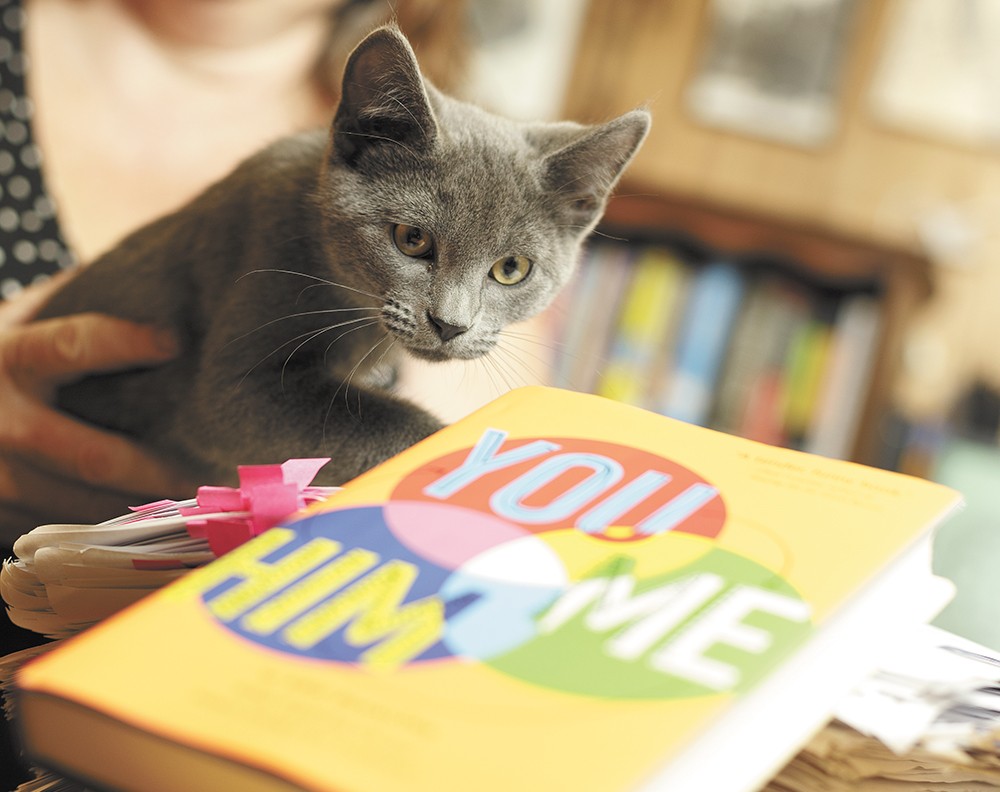 "My perfectionism is the biggest obstacle in writing something I don't know how to do. I'd think 'it's not good,' or 'I'm just going to quit,' and then I read a Neil Gaiman quote that said 'just finish something,' so I started using that as my mantra."

The words flowed from her mind by the thousands per week, beginning back in the fall of 2010. From the tiny office of her perfectly preserved mid-century home or a windowside table at Lindaman's Bistro, Maggie, Nash and Tom's world went from the depths of Dinnison's mind to the screen of her 11-inch MacBook Air.

You and Me and Him is a refreshing coming-of-age story, an ode to acceptance, friendship and love — the latter in the form of a dramatic teen love triangle. Maggie, the protagonist who's loosely based on some of Dinnison's own traits and experiences, and her openly gay best friend, Nash, are just trying to get through their junior year in one piece. But Tom, the new guy at Cedar Ridge High in a fictional Northwest town, has caught both friends' attention. Maggie lets Nash call dibs, and Nash hopes this will finally be the guy who reciprocates his feelings.

"For me, this particular story needed to be told about a teenager. Stories about kids on the cusp of adulthood, in that in-between place, are very interesting and compelling to me," she explains.

during her high school years, back in the mid-'80s, just as records were falling to the wayside in favor of cassette tapes. But she wishes she had. After relocating from the Tri-Cities (Richland) to the Bay Area midway through her junior year, similar to You and Me and Him's Tom, she found solace amidst the vinyl at Rasputin Records in Berkeley.

"I'd go there when I felt like, 'Oh my gosh, what am I doing here in California?'" she remembers. "No one in Berkeley noticed me there because they were all weirder than me."

In the novel, Maggie is Dinnison's girl who works at record store, a hip shop owned by a gay man who's at times more a confidant and friend than a boss. It's there that Maggie escapes from the day-to-day slog of high school drama and her P.E. teacher and mother harping about her weight, and it's where she can blast Billie Holiday — her favorite — without judgment.

"For people who know me, Maggie is recognizable in having the same experiences as me," Dinnison says. "I was a swimmer and I love to hike, and I've lived with my weight my whole life. But if anything, Maggie is an idealized version of what I wished I had been in high school. She is strong and knows herself in a way I didn't."

Connected to the modern teen experience through her years of teaching, yet several decades removed from her own adolescence, Dinnison relied on her then-high school daughter Kate and her friends as a gauge of authenticity for Maggie and Nash's world.

"She would come to me on random days and run a line by me and ask, 'Is this real? Is this really what high school kids are saying?'" says Kate Dinnison, now 20 and home for the summer from her studies at King's College in London. "She wanted to get these characters right, and I think that translated into characters you can really connect with."

One of Kate's friends, an openly gay student at Lewis and Clark High School, became a sounding board for Nash's authenticity.

"I was very careful with Nash. Nash was gay, but he was also a bunch of other things, just like with Maggie — she was overweight, but was a lot of other things as well," Dinnison explains. "That was very liberating. Nash didn't have to represent an entire demographic. We do a lot of labeling and judging in our society, and that is not really the most useful way to talk about human beings. We're more than our weight, skin color, religion and sexuality."

Not a person eager to welcome the attention that comes with publishing her first novel — and in the young adult genre that's rife with smash hits being read by all ages and made into films (she hasn't sold the film rights) — Dinnison is expressly grateful for the local writing community's support.

Before she set out on the quest to write You and Me and Him, Dinnison recalls applying to Eastern Washington University's renowned MFA program in creative writing.

"I didn't get in, and I had to decide if I'm going to do this anyway and find mentors and teach myself, or give up and say 'Oh well.'"

But Dinnison's story is just beginning. The region's flourishing writing community, which has already seen several other highly anticipated debut novels this year, rallied around her. The novel's acknowledgements page lists around a dozen area writers who guided and cheered her on through the years-long writing and publishing process.

"I think Spokane's writing community operates on the fact that if you have success, it raises all boats," she reflects. "It's a synergy, which, I hate that word, but it's the only way to describe it, getting caught up in this storm of all this success." ♦