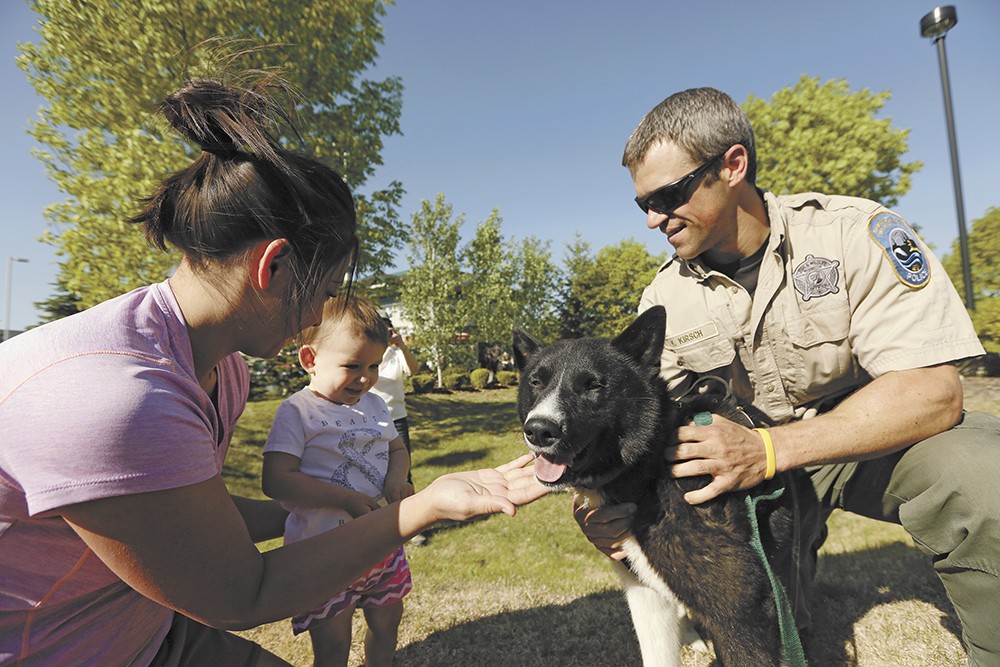 Before they're even on site, the dogs know.

The barking is nonstop. Savu, a 7-year-old, 90-pound Karelian bear dog, is up on his hind legs, sniffing at the black bear sow through the metal grate of a mobile trailer trap. He bares his teeth and barks ferociously at her. This is his job.

Overwhelmed by the barrage of noisy dogs, the bear is silent. She's about to be released back into the hills to rejoin her three young cubs, who've all recently visited a rural Western Washington property to snack on an abundance of garbage littering the place.

Savu and three other dogs, with their Washington State Fish and Wildlife officer handlers, are in place on either side of the trap. The moment of freedom for the bear has arrived, not without consequence.

The dogs' barking roars to a fever pitch. She shoots out of the trap.

Released from their leads once she's passed, the dogs charge after the sow into a lush thicket of green.

An officer on the left aims a volley of nonlethal beanbag shells at the black bear's rear. Another fires a series of cracker shells skyward. The noise, the dogs, the pangs of pain on her backside make for a truly terrifying combination to this mama bear. After all, she'd just wandered through looking to feed herself and her three babies. The food to survive another day was there and free for the taking.

Yet if not for Fish and Wildlife's Karelian Bear Dog Program, the outcome for this wild family could have been much worse, perhaps even lethal. The combination of the dogs, loud noises and rubber bullets on her rear — called a "hard release" — is a purposefully negative experience intended to teach the bear to fear returning to the place she was released. In this particular situation (captured on Animal Planet's Rugged Justice show), preventing that return also relies on the homeowner not leaving trash and other attractants outside, easily accessible. Officers tell him to clean up and issue a warning.

Beausoleil lists the top reasons bears come in close contact with us, in both urban and rural locales: garbage, birdseed and fruit trees. Take those out of the equation, and the bears have no reason to come near, he says.

Thanks to the tenacious work done by Savu and his Karelian brethren, along with the team of wildlife officers, the mama bear and her cubs are unharmed and back where they need to be, with a good dose of fear associated with snacking near humans again.

For the past 13 years, Washington state's Karelian Bear Dog Program — the first of its kind in the U.S., and funded entirely by private donations — has helped save the lives of thousands of bears and cougars who've wandered too close to human populations. Meanwhile, these working dogs are helping protect us from negative encounters with our wild neighbors. It's estimated that 80 percent of animals trapped and hard-released back into the wild with the dogs' help never come close again.

On a breezy Saturday morning in early May, the state's six Karelian bear dogs are soaking up the sun and the attention.

In the hour before a 5K fun run to raise money for the program, the dogs hang out on the grass outside Fish and Wildlife's Eastern Washington region offices in Spokane Valley. They meet families with young children gleeful at the sight of the dogs' plush, black-and-white coats and happy, panting faces. The KBDs, as they're called for short, are calm as can be around the kids, a stark contrast to their indomitable behavior during a bear release.

Karelian bear dogs are an ancient breed from the Karelia region of Finland and northwestern Russia. Bred for centuries to hunt bear and moose, they're fairly uncommon in the U.S. Because of that working nature, KBDs can be incredibly destructive pets unless you have a job for them, or lots of time to exercise them daily. Yet they're incredibly gentle and protective of humans, which makes events like the fun run and school visits ideal opportunities for them to serve as wildlife conflict ambassadors.

The newest dog to join Washington's program is Jax, a year-old KBD who's also the first to be based in Eastern Washington, working alongside Officer Keith Kirsch.

The other five adult dogs — all based in Western Washington, except for Beausoleil's dogs, Cash and Indy, who work out of Wenatchee — are here to join Jax and Kirsch for the fun run. Then they'll spend several days training together, which includes the release back into the wild of some rehabilitated, orphaned black bear cubs. Jax can learn important cues from the more experienced dogs (Cash, for example, has worked with more than 500 bears and 140 cougars so far in his 10-year tenure). Still, the instinct to chase and corner a bear is very much ingrained in his bloodline.

"It's really amazing, when I had him on the first few bears I didn't have to do a whole lot, but he's learned a lot from the adult dogs, and seeing what they're doing," Kirsch says.

Jax flew over from a kennel in Denmark to work in the state's KBD program, but his counterparts are all the product of a Montana-based breeder and bear conflict specialist with the Wind River Bear Institute outside of Missoula.

When they're not chasing bears up trees to be tranquilized and transported to safer locations, or spreading awareness about how to avoid conflicts between bears and humans, the KBDs do lots more. They help their human partners catch wildlife poachers, aid in search and rescue missions and locate baby animals when, tragically, their mother has been killed. When not on the trail of a bear or poacher, the dogs live with their handlers as members of the family.

Kirsch prepped to become a KBD team officer for years before Jax's arrival last fall. He'll work in the field with him until Jax retires at around 12 years old.

"Having a nonlethal tool on the ground is so big," Kirsch says. "It's really tough when you have to euthanize the animal. You know it's not their fault, it's a people/education aspect. And now that we have [Jax], a lot of animals can live and survive. We can have that coexisting." ♦