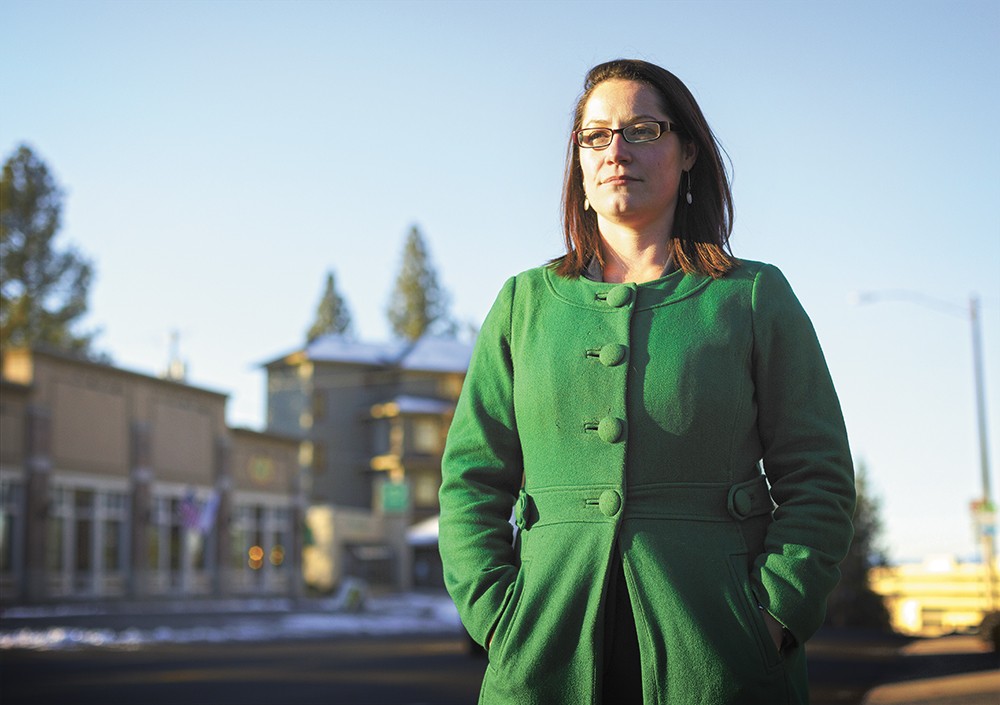 — a doctor, a musician, a professor, a CEO, maybe even a professional softball player. But when you look back on the path that led her to head up the new civil rights unit in the Washington State Office of the Attorney General, it's clear there's really only one thing she should have been — a lawyer.

As a little kid, when she got in trouble, Melody presented her parents with an organized, point-by-point argument for why she shouldn't be punished, her younger sister Shannon recalls. In middle school, Melody joined a peer mediator program where she learned how to resolve disputes among her classmates. She continued doing that work while she attended Ferris High School, but instead of helping classmates, she mediated juvenile criminal cases through a program with the Spokane County Prosecutor's Office. Her job was to help kids who'd been charged with a crime to communicate with their alleged victims and try to come up with a solution to avoid criminal charges.

It was one of her first experiences giving a voice to those who needed help finding their own.

"My presence there is to hopefully provide an impression that the kids' perspectives are going to be taken seriously," says Melody, 33. "To show this is a place where kid interests and viewpoints are important."

As an undergraduate at the University of Washington, she answered phones for the ACLU office in Seattle and prepared and filed immigration petitions with the Spanish government during her year studying in Cádiz, Spain. She also volunteered for Casa Latina, a nonprofit day-worker advocacy organization in Seattle, where she helped immigrants find jobs.

When it looked like she might be headed east for law school — NYU or maybe Columbia University — she was offered a full ride to the UW law school through the William H. Gates Public Service Law Program.

After a year-long clerkship for Judge Ronald M. Gould in the Ninth Circuit U.S. Court of Appeals following her graduation, she worked as a trial lawyer for the Department of Justice in the Civil Rights Division.

Earlier this year, she accepted an offer to lead the newly established Wing Luke Civil Rights Unit in the attorney general's office.

"Colleen is a superstar young lawyer," Gould says. "I was happy to have her clerk for me, and I think she predictably will do a very competent and conscious job."

For decades, a leader of the Aryan Nations

hosted a "World Congress" on his 20-acre compound in Hayden, Idaho. Melody's family has a lake place in Hayden, where they would take vacations in the summer. Hundreds of skinheads, white supremacists and neo-Nazis flocked to North Idaho and made national news for their goal of an all-white Pacific Northwest.

The news coverage frustrated Melody, who felt defensive about Hayden, which was gaining national attention for the hatred spewed by Butler.

"That was a consistent drumbeat, and that was formative," she says. "They were promoting and engaging in race-based violence that was a disgusting message to many of us, and yet they were our neighbor."

In 2000, the Southern Poverty Law Center, a legal aid organization based in Alabama, with the help of Coeur d'Alene attorney Norm Gissel, sued Butler for assaulting a mother and her son when they stopped in front of his property to search for a lost wallet. The jury returned a $6.3 million judgment against Butler and three of his followers. The judgment bankrupted him and he lost his compound in North Idaho.

"I noticed that lawyers doing work on behalf of one client might have an impact on the whole community in some way," she says. "That made a big impression on me."

That impression carried her through college and into law school. In 2006, she was one of the first people selected for the Gates Public Service Law Program, funded through a gift from Microsoft co-founder Bill Gates to his father. The birthday gift was five scholarships a year for 80 years. In exchange, the recipients agreed to dedicate the first five years of their career to public service.

For Melody, that was a no-brainer.

, a little flower shop in the Tri-Cities sparked an interest in assembling the new Civil Rights Unit. When Barronelle Stutzman, the 70-year-old grandmother who owns Arlene's Flowers and Gifts in Richland, refused to provide flowers for a same-sex marriage, Ferguson's office filed a suit under the state's anti-discrimination law in 2013. In February, a Benton County Superior Court judge ruled against Stutzman. She is appealing the decision.

It was then, Ferguson says, that he realized he was in charge of the biggest law firm in the state, but he didn't have anyone to pursue affirmative civil rights work.

He adds that it was important to him to hire the right person to lead the state's efforts to protect Washingtonians' civil liberties. He points to Melody's record of working as a trial lawyer in the Justice Department, enforcing fair housing and civil enforcement laws.

"She's an intellectual powerhouse, and has demonstrated throughout her professional life a passion for issues related to civil rights," Ferguson says. "She could be sitting in any office in the country and making a helluva lot more than I'm paying her, but she has a vision for this office."

During her five years with the U.S. Department of Justice, Melody achieved several big victories, but one in particular stands out to her.

In 2012, she won a $2 million settlement in a case where a landlord in Bakersfield, California, was accused of sexual harassment. At the time, it was the largest monetary settlement ever secured by the Department of Justice in a sexual harassment suit under the Fair Housing Act.

Since accepting the job in her home state, Melody has been reaching out to community groups, businesses and legal aid organizations, gauging the issues facing Washington state's citizens and what's currently being done to address them. Some that continue to pop up: housing and employment discrimination.

To that end, she filed a lawsuit in October against Spokane-area car salesman Monte Masingale for sexual harassment of his female employees. According to the complaint, Masingale is accused of only considering females for secretarial positions and then making sexual comments, kissing and grabbing them and asking for sex in exchange for the job.

"I think there have to be creative ideas around how to make sure everybody, not just large corporations with certain kinds of moneyed interests, can benefit from the law, and that the law still reflects their participation in this community," Melody says. "It's up to public interest lawyers and other community partners to make sure our policies are developed and enforced to protect everybody, because laws are not just for people who have lots of resources." ♦