Beyond aesthetics and visual appeal, the arts are a powerful economic driver at local, state and national levels 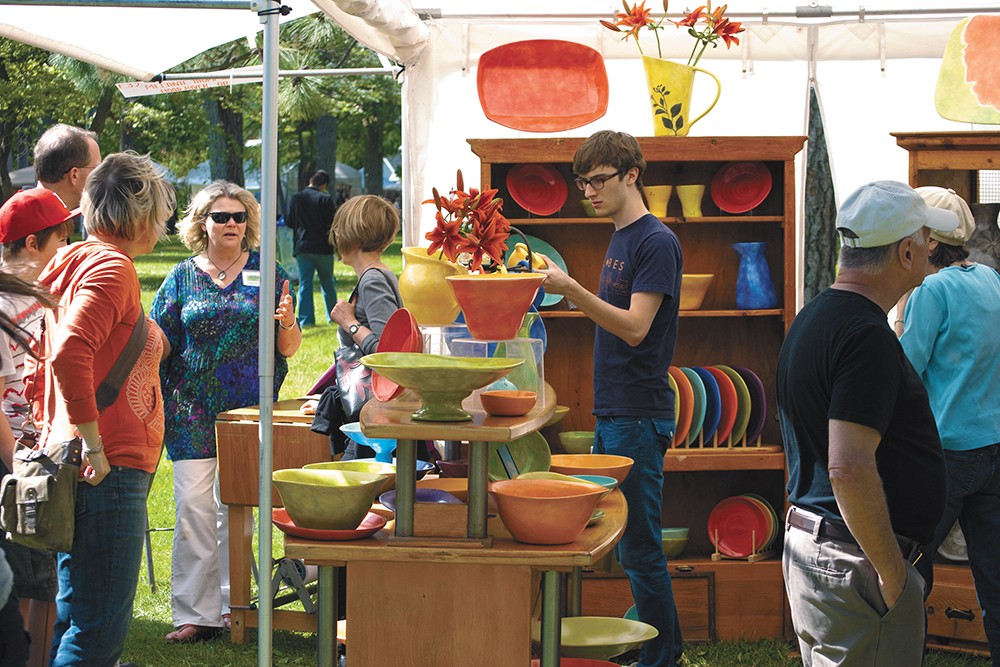 You don't have to like or even understand art to value it. And we're not talking about the value of making it, or the pleasure a particular painting brings, or the myriad ways art has shaped society.

In 2015, for example, the arts — visual art, plus performing arts like dance, music and theater — contributed $63.8 billion dollars to the national economy according to Americans for the Arts' annual report on art and economic prosperity. Arts-related jobs? There are 2.3 million of them, creating $49.4 billion in household income, plus there's $11.9 billion in government revenue tied to arts organizations.

Now double that $63.8 billion, according to Americans for the Arts, because arts events leverage additional spending — dining out, parking, travel — and 2.3 million more jobs, close to $47 million more in household income, and $15.7 billion in government revenue for organizations completely outside the arts.

In other words, the arts can benefit everyone.

Statewide, the arts represent 2.8 percent of Idaho's gross product and 21,633 jobs — $1.9 billion in revenue — according to the U.S. Bureau of Economic Analysis. In Washington state, the arts contribute $41 billion and 177,527 jobs.

Drilling down further, the arts mean business, according to the data. In 2014, for example, Spokane Arts worked with Greater Spokane Incorporated, Eastern Washington University and the city to study the impact of the creative sector on arts-related employment and per capita spending to come up with a Creative Vitality Index. Countywide, Spokane employs 7,000 in arts-related jobs. The study also concluded the arts improve livability, are part of the skill set desired by business leaders, and are vital to tourism and employment.

Results of a newer study should be even more compelling, Spokane Arts Executive Director Melissa Huggins says. The 2014 study was prior to the admissions tax ordinance allowing for municipal funding of arts and culture through the Spokane Arts Grant Awards or SAGA.

"Since January 2017 the SAGA grants program has awarded over $175,000 to 49 local artists, organizations, and collectives, and we hope to continue increasing the pool of available funding," Huggins says. In turn, grantees have leveraged funding into greater amounts, which in turn impacts the economy.

A little goes a long way in Idaho, too, says Juta Geurtsen, Idaho Commission on the Arts community development director.

"The practical reality is that the [ICA] supports a tiny fraction of organizations' budgets, averaging 3 percent," she says, noting that they don't want organizations relying on ICA or any other single revenue source.

The 2008 recession, for example, diminished their budget by one-third, which drove them to re-envision their services, Guertsen says. An example is the ICA's Change Leader Program, which helps arts administrators network and build capabilities.

"We also are finding great opportunities in helping civic leaders to learn how to use their artistic assets to improve their local economies. This kind of community cultural and economic planning recognizes the role of thriving arts markets in thriving cities."

Coeur d'Alene's Arts & Culture Alliance Director Ali Shute is excited about the arts in her community.

"I feel like this community is really coming around to fully embracing the arts," Shute says, noting that the A&C budget has tripled — from $30,000 to $90,000 — since she started as director. More funds allow the organization to run programs more effectively, with more visibility, she says, which in turn helps garner financial support. "It's a big circle," Shute says.

Shute is also excited about exploring potential Idaho "creative districts," a state designation which leverages federal and state dollars to support creative economies. Washington state is in the forefront of implementing them since the state created its designation in 2017, which might help correct what Huggins sees as a disparity in funding.

"According to ArtsWA, arts and culture is the fifth biggest industry in Washington state, but we're ranked 46th in the nation in terms of arts funding," she says.

Another disparity is arts education funding. "We all know that in tough economic times, arts and culture programs are often the first to be cut or drastically reduced," says Huggins, who is concerned about long-term ramifications. The data, she says, supports the connection between the arts and academic achievement, including college graduation rates, especially among students in low-income households.

In Idaho, it's rural communities that are most impacted by reduced arts funding, Geurtsen says, because they have "fewer wealthy benefactors ... than larger urban centers."

Fortunately, Geurtsen says, the National Endowment for the Arts is deepening its ties with the nation's state arts agencies, which in turn helps Idaho's rural communities served by organizations like the ICA. But not everyone is convinced national funding is worthwhile. The Trump administration has threatened to cut funding to organizations like the NEA three years running.

Fewer federal dollars would put the onus on local arts organizations to ramp up emphasis on the business of art. Many already do so.

And putting their own spin on the value of the arts, the Northwest Museum of Arts & Culture recently organized Arts Collecting 101, featuring Ben Joyce, Mel McCuddin and Dean Davis, all of whom make a living from their artwork. In addition to his work, Davis talked about collecting art to feel connected to the artist.

"Art doesn't have to be super expensive," he says, "you just have to like it." ♦

The original print version of this article was headlined "Art Appreciation"