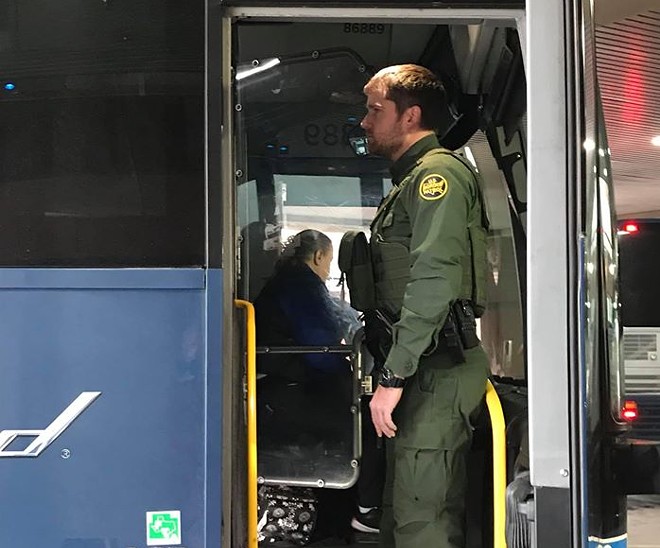 David Brookbank photo
A Border Patrol agent boards a Greyhound bus on Dec. 21, 2019. A Jan. 28 memo specifies that Border Patrol must have the driver's or company's permission.
For years, the stance of the Greyhound bus company has been that it hates the fact that U.S. Customs and Border Enforcement Border Patrol agents are boarding their buses and interrogating their passengers about immigration status, but the law is the law, and until that changes, Greyhound can't do anything about it.

But now, in a story broken by the Associated Press, a Border Patrol memo maintains that Greyhound can do something about it. They can just say no.

"Absent reasonable suspicion or probable cause, BPAs do not have legal authority to board a bus without the consent of the transportation company or one of its employees," then Border Patrol Chief Carla Provost wrote in a Jan. 28 memo. "In the event of a denial, agents should remain professional and courteous."

The memo, sent to all chief patrol agents and director chiefs in the agency last month, begins by reasserting the authority of Border Patrol to search buses without a warrant within a 100-mile distance of the border. But within that context, Provost wrote, it still must be "constitutionally reasonable."

In particular, she pointed to Almeida-Sanchez v. United States, a 1973 Supreme Court case. The case indicates that because a highway ran east-west, but didn't actually connect to the Mexican border, Border Patrol wasn't allowed to conduct warrantless and suspicionless searches of vehicle. That's precisely the case Spokane City Council President Breean Beggs have been pointing to in emails with the Border Patrol, stressing that they don't have authority to raid buses that aren't heading to or from the border if they don't have permission, a warrant, or reasonable suspicion that a crime has been committed.

"When transportation checks occur on a bus at non-checkpoint locations, the agent must demonstrate that he or she gained access to the bus with the consent of the company’s owner or one of the company’s employees," Provost wrote. "In addition, the BPA will have to ensure that his or her actions, while onboard the conveyance would not cause a reasonable person to believe that he or she is unable to terminate the encounter with the agent."

If the bus driver doesn't consent to a search, Provost writes, the Border Patrol agent should end the interaction and report it to their superiors.

Greyhound did not immediately respond to questions from the Inlander, but in the AP story the company stressed that they were "pleased there appears to be greater context about these practices as we have publicly stated we do not consent to these searches and maintain that position."

David Brookbank photo
Border Patrol maintains they still have the right to question anyone embarking or departing from a bus.
Does that mean that, if Greyhound chooses to decline to allow Border Patrol to board their buses, there won't be any more Border Patrol raids at Spokane's Intermodal Center? Not necessarily.

"If [Border Patrol agents] are refused access to a bus, they may still engage in suspicionless and consensual encounters at the public bus or train stations," Provost wrote. "The BPA can attempt to question individuals before they board or after they exit a bus. Law enforcement officers are permitted to ask questions of people in any place where the agent is lawfully present."

But Beggs, the City Council president, says that the "lawfully present" line is the key factor.

"They could stand outside the front door," Beggs says. "[But] they don't have permission to be inside the intermodal building under city law unless they have express written permission from the mayor," Beggs says.

In 2018, the Spokane City Council passed an ordinance to reiterate that the restricted area of the Intermodal Center, where passengers board and disembark from buses, was not considered public, stipulating that immigration agents could only enter the facility if they had a warrant or written permission from the mayor. (Last year, the Inlander was kicked out of the Intermodal center waiting area by a security guard for not having a ticket.)

Former Mayor David Condon, however, refused to do anything to enforce the City Council's ordinance, believing it was superseded by federal law. And the new mayor, Nadine Woodward, was positively enthusiastic about the Border Patrol raids at the facility: In a recording of a Rotary Club event during the campaign, she praised the "incredible service" the agency was conducting at the Intermodal Center, citing "the arrests they're making with the illegals and especially in the drug trade."

But Beggs says the fact that the Border Patrol memo cites the Sanchez precedent — the same law the council cited when it passed the ordinance — it answers any doubts the city might have about whether the ordinance is unenforceable.

"I'm going to be checking with city legal, and say, 'OK, now that we know [Border Patrol has] adopted the same law that we used when we passed the ordinance, what are we going to do about it?'" Beggs says.

Asked about the memo, city spokeswoman Marlene Feist stressed that the city's legal department wasn't aware of it.

"We believe that at least portions of the Intermodal Center are open to the public where federal agents can lawfully be," Feist says.

Border Patrol, however, doesn't plan to change their tactics at the Intermodal Center.

In an email, Special Operations Supervisor Bill Kingsford writes that, "With regards to our operations at the Spokane Intermodal, we will be continuing to go there as we have up to this point."

Kingsford confirmed the existence of the memo but declined to provide any further context.

The Border Patrol is currently facing litigation from comedian Mohanad Elshieky, a refugee from Libya, who was pulled off a bus by Border Patrol agents in Spokane last year.

“It should be unambiguous to Greyhound now that it has the ability to prevent Border Patrol officers from entering their buses,” says Aaron Korthuis, attorney with the Northwest Immigrant Rights Project. "It just underscores for us that Greyhound could have been acting differently."

But even with permission from Greyhound, Korthuis says, the actions of Border Patrol still raise concerns over whether it has been "racially profiling people and disrespecting people's rights."