In the University District and East Sprague, two separate visions are merging, transforming the city 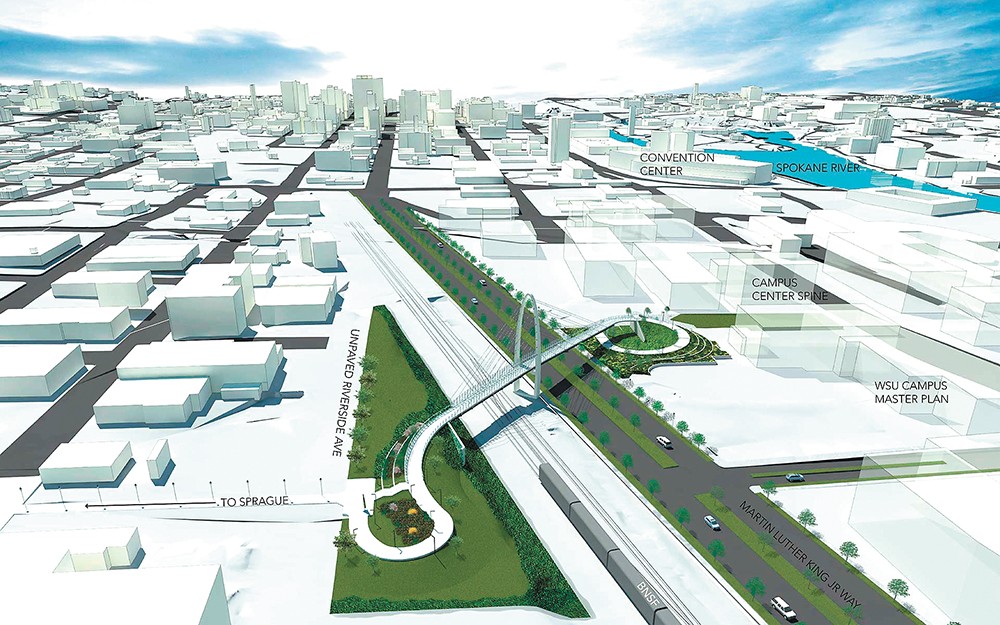 renderings courtesy of City of Spokane
The University District Gateway Bridge, under construction now, will provide a route across the train tracks for pedestrians and cyclists.

The area just east of downtown Spokane has heard a lot of negativity over the years.

And as a 15-year resident of East Central, Heather Wallace knows all about it.

"It takes a really long time to change the reputation of a neighborhood," Wallace says. "Everyone knows East Sprague is known for prostitution. When people say 'Sprague,' that's what you think of."

But soon, community leaders agree, that won't be the case. It'll be known as a place to shop, a place to live, and a place to get an education. From the University District to the East Sprague business district, a huge chunk of Spokane is in the midst of a transformation that promises to make the area safer and more vibrant.

And after years of work to make it happen, this construction season marks two major milestones in that transformation.

And this week, construction began on a $4.3 million project to revitalize the East Sprague business area between Helena and Stone Streets. By fall, there will be new sidewalks, lighting and landscaping.

It's all a result of two different visions, created decades ago on each side of the train tracks. On the north side, there's the vision of the University District, which is now home to several university campuses, including Washington State University and Gonzaga. On the south side and farther east, residents and local businesses created a vision to improve East Sprague, and the plans gained traction when the city of Spokane targeted the area for public investment in 2013.

And now? Wallace, a member of the East Central Neighborhood Council, doesn't hear the kind of negativity she used to.

"People are excited," she says. "They're excited for it to finally happen."

rendering courtesy of City of Spokane
Walkers, bikers and strollers will share the area.

When Spokane City Councilwoman Amber Waldref was a kid, she rode her bike on the Centennial Trail through what is now the University District. At the time, decades ago, it was mostly dirt.

"It was just nothing," she says. "Rocks and dirt, and nothing."

Eventually, local universities opened campuses there. By 2004, the University District laid out a plan for redevelopment. With its proximity to downtown and local hospitals, as the thinking went, it was the perfect location for medical education and research. Included in that plan were city projects like the University District Gateway Bridge and the extension of Martin Luther King Jr. Way, which runs through the U District.

This year, Washington State University's Elson S. Floyd College of Medicine is set to open, construction of the bridge is underway, and the next phase of the MLK Way extension is getting ready to begin.

The city's investment in the area already seems to be bringing more private development. In March, Avista announced plans for a major project on the south side of the railroad tracks, made possible in part by the connection of the the University District Gateway Bridge. Avista, which is calling it the Catalyst Project, has said it will be a 140,000-square-foot, multi-use building on 5 acres of land, with high-tech labs and space for offices or classrooms. Other details of the project, including the price and which partners will use the building, haven't been released.

Latisha Hill, senior vice president of development for Avista, says the project ensures that the bridge will not "land in gravel" on the south side of the train tracks. She says the No. 1 impact of the development will be jobs.

There are more and more students in that area, especially with the incoming WSU medical school and the already existing University of Washington medical school on Gonzaga's campus. They'll need a job to support them out of college, she says.

"I'd like my friends to come back and think that Spokane is cool again," Hill says. "Our goal is to create and support efforts already underway."

The development farther east on Sprague will help lure private developers to the area. While it's a different project, what happens on East Sprague is "synergistic to what happens in the University District," Otterstrom says.

"If we as a community say East Sprague is important, [the] U District is important, then developers look at the opportunity to invest," he says.

University District development supported East Sprague's efforts to revitalize as well, says Waldref. In 2013, city council had to choose which area of the city it would target for revitalization. Ultimately, it came down to West Central and East Sprague. The council chose East Sprague, partly because local business owners and residents had been pushing for change for so long, and partly because there was already momentum from the University District.

"Without the U District vision," Waldref says, "I'm not sure if we would be where we are today, with the amazing amount of investment that's occurred farther east." 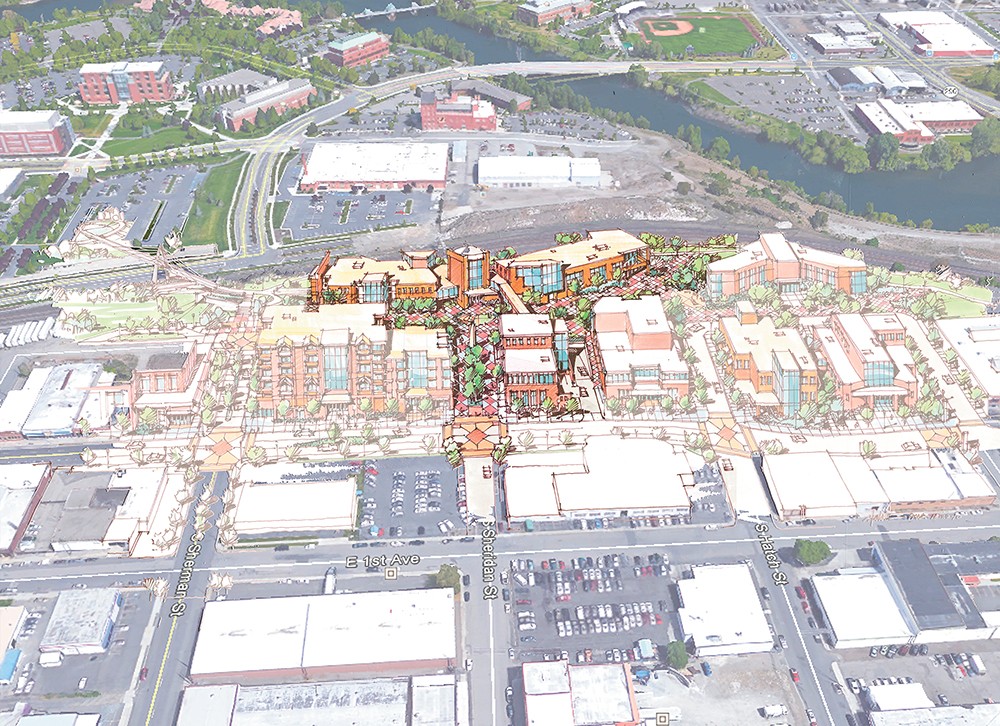 Avista's rendering of a planned development south of the train tracks.

Rather, businesses are more worried about how construction may hurt them in the short term. But the concern that lower-income people may be forced out of the area due to higher living costs is very real to some, including Waldref.

She brings up South Perry, another East Central neighborhood where streetscaping improvements brought about an influx of new businesses and increased the cost of living. But Waldref says that gentrification can be avoided near Sprague, if done right. That means replacing any affordable housing that goes away.

An apartment building for low-income residents is being built right now in the section of East Sprague being renovated, at the corner of Sprague and Madelia in what used to be a used-car lot. The 1 South Madelia Project will bring 36 new units, and the funders agreed to serve households with income levels at 60 percent of the area's median income, says Melissa Owen, a project planner with the city of Spokane.

"If we can ensure that we replace any affordable housing that ends up going away, then I think it's a win-win for the community," Waldref says.

Wallace, with the neighborhood council, says they have learned from what happened in South Perry, though she notes that it might be hard to control cost-of-living increases.

"We want this to be a neighborhood where people can still afford to live," she says.

The renovations to East Sprague are different than that in other areas of Spokane, like North Monroe. While the East Spokane Business Association pushed the city for changes, Waldref says, it's the residents who have pushed for the changes to North Monroe.

That's because not all of the North Monroe businesses see the lane reductions and street improvements as necessarily benefiting them. (See "Drawing Lines in Asphalt" on page 20.) When it comes to Sprague, however, everyone seems to be on the same page.

Last year, for example, East Sprague businesses and property owners created a business improvement district, or a self-taxing zone to raise money for improvements. Jim Hanley, owner of the Tin Roof furniture store on Sprague and a member of the East Spokane Business Association, says he envisions the area to be an "upscale neighborhood," with more high-end businesses moving in.

Waldref says that those businesses, in turn, will help the cluster of development that is expected to move farther west in the University District, south of the train tracks.

Between the University District and the East Sprague business district, some compare the transformation to Seattle's South Lake Union area, another neglected neighborhood that has been turned into a vibrant urban center.

"I think you could say it's similar to South Lake Union, in that it took some visionary people who said, 'We're gonna do this,'" Waldref says. "They brought everybody along, it took a lot of time and money, and in the end created a whole neighborhood that's walkable, transit-oriented, has good-paying jobs. East Sprague can be that."

Hill, with Avista, goes one step further. She believes that the area has something "more provocative" than South Lake Union. It's bigger, and near six universities and two hospitals.

"We need to set a new standard," she says. "They should be saying, 'Wow, have you seen what Spokane did?'" ♦

[Editor's note: This story has been updated to correct the name of the East Spokane Business Association, and more accurately reflect who first proposed changes to North Monroe.