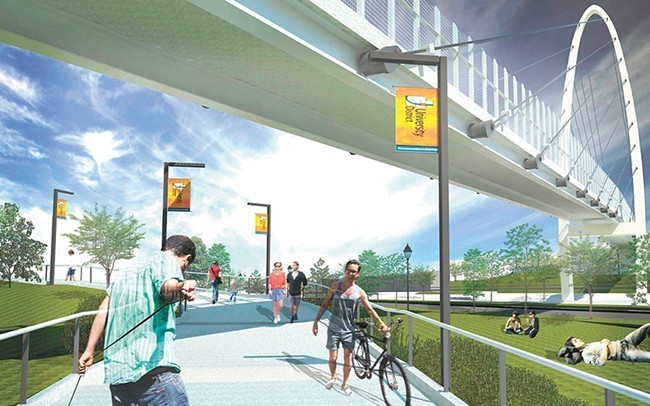 City of Spokane rendering
Imagine all the slightly-translucent pedestrians the University Gateway Bridge will attract!

The city formed a naming committee. It solicited hundreds of suggestions to find a timeless, and perfect name for the new University District Gateway Bridge, the $9.5 million bicycle and pedestrian bridge connecting the University District to the East Sprague area.

Which, fine. Sometimes you travel the world searching for what you thought was missing, only to find what you'd been looking for was in front of you the entire time.

Doesn't "University Gateway" sound like the slow-loading website app where you have to enter in your FAFSA information to get financial aid for a third-rate college?

Since the City Council won't vote on the name until April 16, the city still has a chance to come up with a  cooler name.

So with that in mind, here are a couple of suggestions. The city is welcome to take any of these suggestions, as long as they include a little bronze plaque on the bridge, that says "NAME FIRST APPEARED ON INLANDER.COM, AMERICA'S BEST-READ URBAN WEEKLY."

4. The Arc of Spokane

7 The It's Not U, It's Me District Bridge

16. Mike Leach Bridge, But Not the WSU Football Coach, the Other Mike Leach, One of My Dad's Former Youth Group Kids, You Don't Know Him

18. Wildlife Crossing for the Most Dangerous Game of All  — Man!

24. The Please Don't Drop Pennies Off Of This At Passing Cars Bridge

25. I Paid $9.5 Million Through State, Federal and Local University District Funding and All I Got Was This Iconic Civic Landmark

26. The Salish word for "Canada Island."

Most of all, however, the bridge needs a short name that communicates not only that it's a crossing, but that it's meant to connect the people to an academic institution. It needs to celebrate Spokane. It needs to recognize the intent to create an intellectual, data-oriented hub in the area.

So with that in mind, let me propose:

How ISIS rules, how to reduce gun violence (and how not to) and morning headlines