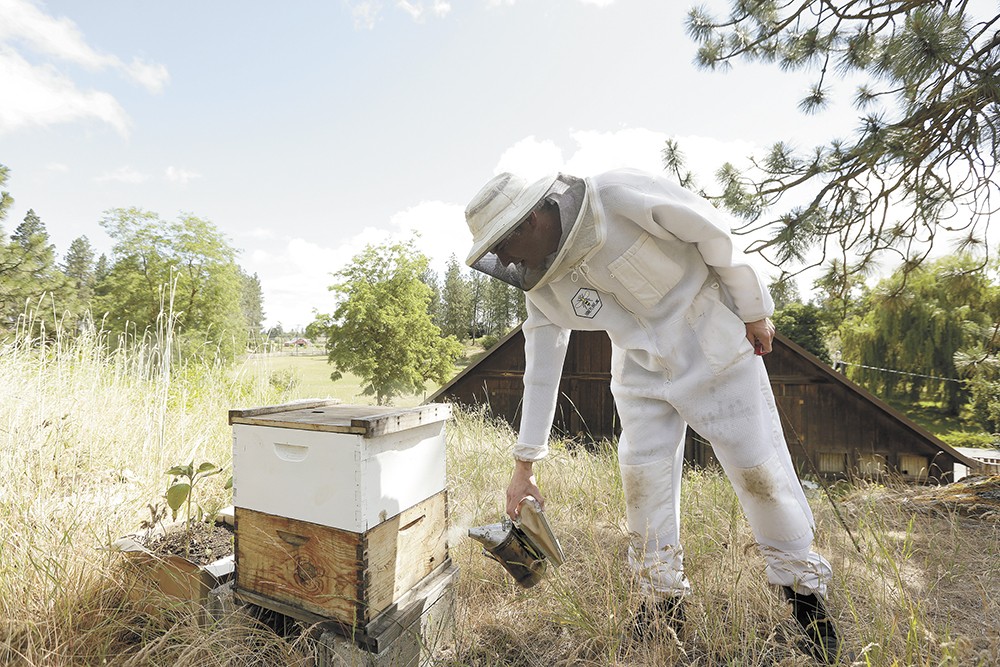 Rob and Chelsea McFarland's interest in bees started in their garden,

where one day Rob noticed a few paying particular attention to his raspberries.

Within minutes, the few turned into hundreds buzzing the area. Rob was familiar enough with honeybees through their appearances pollinating his vegetables that he wasn't afraid. But when he saw the swarm, now numbering in the thousands, gather on a tree branch outside his neighbor's door, he realized this was no typical feeding frenzy.

Rob grabbed a camera and a phone — the camera to document this intense gathering of feral honeybees in the middle of urban Los Angeles, and the phone to call a hotline for just these kinds of situations run by a local bee wrangler Rob had seen on YouTube.

A couple of hours later, Rob was helping corral the bees into a box — no bee suits necessary — and that day five years ago marked the beginning of a dramatic life change for the McFarlands, as they became avid beekeepers and activists. Since then, they've launched efforts in Los Angeles to allow personal hives inside city limits, started a nonprofit called HoneyLove to educate and inspire fellow beekeepers, and most recently published a book called Save The Bees With Natural Backyard Beehives.

"For me, it was just purely addictive," Rob says. "I caution people when they're getting into it that this may very well take over your life. Here's a creature you can literally spend your life learning about, and continue to uncover these mysteries and fascinating behaviors and think about in different ways."

The McFarlands now do their beekeeping in Medical Lake

, where they moved about a year ago. Rob, born and raised in Spokane, says "my heart's always been in the area." While they're still involved in the Los Angeles beekeeping community through HoneyLove and a Natural Beekeeping Conference they're launching in August, they wanted to start their family in the Inland Northwest, and find space for more gardens, more animals, and yes, more bees.

The McFarlands brought their hives with them — a group once numbering as many as 30 — but many didn't survive their first winter in Washington.

"Generally, you want bees who are adapted to your local climate, and our bees were adapted for Southern California," Rob says. But those that did survive clearly "had some advantage" genetically that they would like to pass on to their new hives. And the new bees have a good life on their lakefront property, where the McFarlands make sure there's healthy, natural food growing.

"I feel like we garden for our bees, it's not the other way around," Chelsea says. "We plant things that don't really benefit us as much as the bees. We planted a few acres of clover in the grass. And Rob, pretty much everything he planted this year has some benefit for the bees." 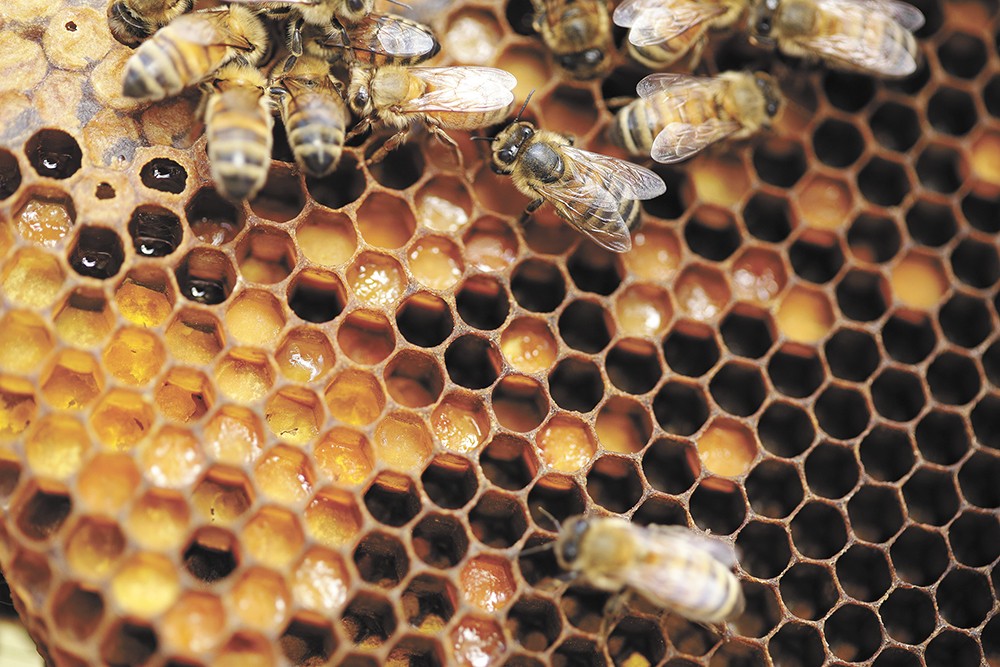 Many have heard the scary statistics about what's happening with the world's bee population. The number of hives is roughly half that of what it was just after World War II, and the decline is widely attributed to everything from increased use of herbicides and pesticides to the industrialization of farm crops, from stresses put on bees by climate change to genetic tweaking of the bees themselves for increased honey production. The effects of colony collapse are frightening, considering that bees are responsible for pollinating more than a third of the world's crops.

The McFarlands believe an all-natural approach to beekeeping — including in urban areas — can help. Whether in Los Angeles or Spokane, cities have surprisingly abundant food sources for bees, and often less chemicals than in agricultural areas.

One of the barriers they and like-minded beekeepers deal with is humans' fear of bees. Honeybees are generally docile and won't sting without being provoked. But the average person often confuses them with yellowjacket wasps, or have heard about "killer bees" and been scared senseless.

"Most people I talk to who've been afraid of bees do not know the difference, actually, between a bee and a wasp," Chelsea says. "Anything black and yellow with a stinger is a 'bee.'"

Spokane Municipal Code allows bee colonies on residential property, the number of hives allowed depending on the acreage and the distance from the property's border; the hives must be registered with the state Department of Agriculture. In Coeur d'Alene, beekeeping is allowed and any complaints are dealt with under the city's nuisance laws.

When the McFarlands made the move to the Inland Northwest, they joined the West Plains Beekeepers Association, one of many regional groups dedicated to beekeeping. That's one of the first steps they recommend for new beekeepers, and experienced hands can find people to trade tips and recommendations that can only come from people doing beekeeping in the same region.

"That mentoring is really critical and we harp on it in our book, because you learn all the facts and all the processes, and then you can use the tools you have to solve the problems and issues you're dealing with," Rob says.

Young Kwak
Rob McFarland lights his smoker, which he uses to tend to his hives.

On a mid-February Saturday in Coeur d'Alene

, a couple of dozen people fill a classroom at the University of Idaho's Kootenai County Extension building for a daylong class in beekeeping basics. They're joined by experts and surrounded by tables showcasing necessary equipment, books and photos of backyard-hive styles.

Carol Randall, a U.S. Forest Service entomologist and North Idaho beekeeper for about 12 years, is leading the first session — a deep dive into bee biology and their regional history.

After Randall delineates between different types of honeybees — queens, drones and workers — and their essential jobs in the hive (laying eggs, fertilizing the queen and hive construction and defense, respectively), master gardener Barbara Ford delivers some harsh truths about becoming a beekeeper. It's expensive, she says, and can eventually cost you thousands of dollars in equipment, bees and honey-processing fees. Then there's the emotional toll of losing animals you care for when, inevitably, a hive dies. Ford and her husband have been keeping bees in rural North Idaho for 13 years, and "we still don't know it all," she says.

"You're dealing with a live animal. This is not something that you stick in a box out there and say, 'OK, they'll take care of themselves,'" Ford says. Especially when you're just getting started, there's going to be trial and error. "You're always learning, there's always a problem. Because what are you dealing with? Nature."

Throughout the day, the experts discuss the different beekeeping approaches, from the all-natural style favored by the McFarlands to medicinally treating bees, from feeding bees sugar water to the different types of hives one can build or purchase. For every question that arises, there are several responses at the ready from the beekeepers. That's no surprise to Kara Carleton, the coordinator of the UI Kootenai County Extension's master gardener program.

"Ask five beekeepers the same question, you will get seven different answers," Carleton says. "And they're all right."

The McFarlands echo that sentiment. They've attended enough meetings and classes to know there's a wide range of thought on whether all-natural is the way to go. It can be as divisive as "religion and politics," Chelsea says, but Rob adds that there's a lot of common ground even among practitioners of different approaches.

"It's just like growing food. You can get to the same point a lot of different ways. It just depends on your philosophy and how you feel connected with your bees," Rob says. "Both groups ultimately want to keep healthy bees, and love their bees, for lack of a better description. We try not to let that be too divisive an issue."

When Gonzaga opened its Hemmingson Center

last year, the new building became a centerpiece of campus life, constantly abuzz with activity thanks to its meeting rooms, The Bulldog bar and restaurant, a dining hall and a Starbucks. It also buzzes with the activity of a couple of honeybee hives sitting within just a few feet of where students nosh on lunch on a second-floor patio.

The hives are tended by two guys who met while working for the school's dining services and found they were both considering getting into beekeeping. For Chuck Faulkinberry, now the Hemmingson Center's director, beekeeping came with a move to the West for his job at Gonzaga, and his family's desire to lead "a more sustainable lifestyle." He recalled learning about bees as a Boy Scout, and knew about "the plight of the honeybee, just having a difficult time." He figured his land in Chattaroy would make a good spot for some hives, and he took a class through the Inland Northwest Beekeepers Association that helped him get started. He now keeps three hives at his home.

"It really answered all the questions that I didn't even know I needed to ask," Faulkinberry says of the class. "It gave me direction and it gave me resources."

Dan Harris, now Hemmingson Center's lead concierge, has some land with fruit trees between Deer Park and Chattaroy, and thought beekeeping would help pollinate his garden and orchard. He took some classes with his wife about five years ago and now has six hives at his house, a few at his brother-in-law's Green Bluff property and more on some land Gonzaga owns in Wandermere.

Both men fell in love with beekeeping, for fun, for relaxation, and for the knowledge that they're helping some hives survive in trying times. Both do it as naturally as possible; Faulkinberry won't even use smoke, lest it stress out his bees.

They see the hives on campus as a great way to educate people about honeybees and the challenge they face.

"It's primarily an integrated learning opportunity for students," Faulkinberry says. "They can ask, 'Why do we have bees?' and we can tell them about the plight of the honeybees, how docile they are, that they're not yellowjackets, not wasps."

The Gonzaga hives had some challenges in their first year, just like their peers across the world. The bees were healthy and happy last summer, enjoying the food available in campus gardens and around the neighborhood, when some of the bees brought a disease home, causing a massive die-off of both hives. But two new colonies started building in April, and so far, so good.

The McFarlands agree, and would appreciate that Faulkinberry and Harris took the time to take classes before starting their hives.

"That's what we say the first step for new beekeepers should be," Chelsea says. "Before you get your bees, before you get your equipment, read a book. Go to a meeting. It seems like cart before the horse, but it's not."

"It's not something you jump into lightly," Rob adds. "It's a life. If you don't have the commitment, don't do it." ♦