Bundle up and grab a beer — the Gonzaga vs. North Carolina game is hitting the big screen at the Pavilion in Riverfront Park 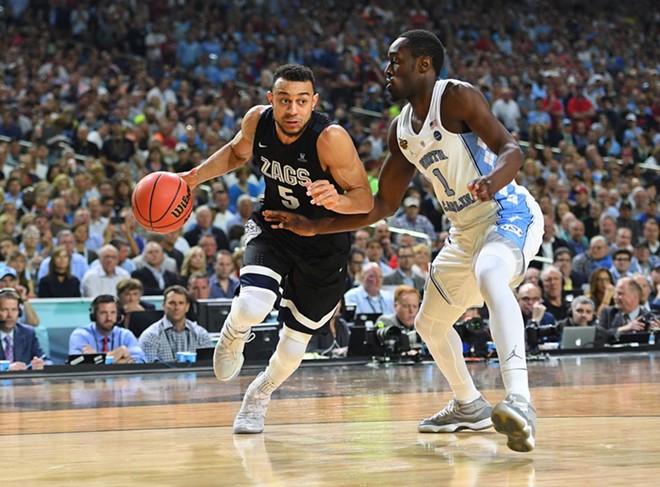 Gonzaga athletics
Gonzaga faced off against North Carolina in the 2017 national championship game. Now the Tarheels are coming to Spokane.

You can expect a steady drumbeat of hype for the next month or so in anticipation of the University of North Carolina's visit to the Kennel at Gonzaga Dec. 18. And while tickets for the Tarheels/Zags showdown are impossible to get, and virtually every TV set in town will be showing the game, the Hoopfest folks have something special planned.

The Watch Party will give basketball fans of all stripes and all ages the chance to gather at the U.S. Pavilion at Riverfront Park to watch the game on the big screen. Not only are the Tarheels one of the most-storied college basketball teams, they were also the opponents in the NCAA championship game in 2017. You remember — the Zags were about two minutes from a title? It still hurts, I know.

The Watch Party for the 6 pm tip-off will be free, and show the game on two jumbo screens. There will be heaters throughout the Pavilion, food trucks on site, No-Li beers in a beer garden and Indaba coffee and hot chocolate.

Tickets to the actual game are going for between $950 and $3,000 on Stubhub right now, so you can probably call this the biggest game in the history of the Kennel. Why not watch it with a bunch of friends — for free — in one of Spokane's coolest attractions?

Tickets will be available starting Nov. 18, so keep an eye on the Hooptown USA website for how to grab them.

Riverfront Reimagined: A behind-the-scenes look at how Spokane saved its iconic park

Louder for the people in the front: Zag fans have their own challenges during away games

After a brief rest, the Zags will head back to the Bay Area to face archrival Saint Mary's

Louder for the people in the front: Zag fans have their own challenges during away games

After a brief rest, the Zags will head back to the Bay Area to face archrival Saint Mary's

Be part of the Inlander's upcoming Poetry Issue!