Ryan Desmond's meat portraits are being pulled down all over town. Is it discretion or censorship? 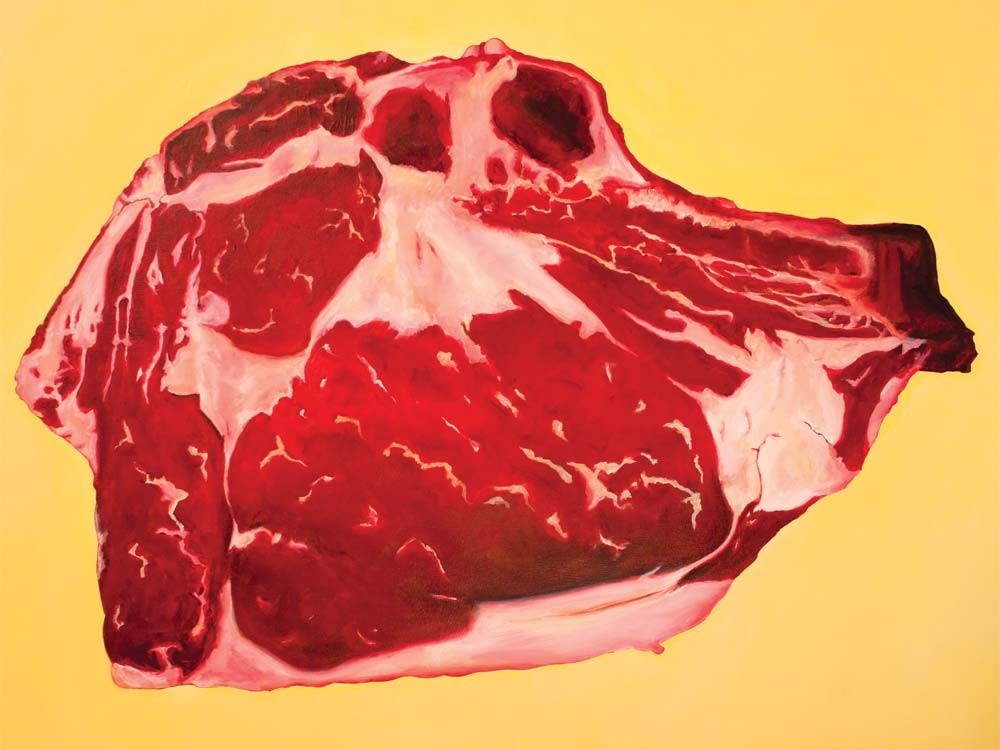 Gaze upon this rib eye and know controversy.

"This has kinda put me off meat, to be honest,” Ryan Desmond says, sitting on a stool in Neato Burrito, surrounded by his paintings, which hang from the duct work like sides of beef in a meat locker.

Two months in a row, now, patrons of Spokane’s First Friday art walk have gazed upon Desmond’s large-scale paintings of raw cuts of meat at local bars, only to find them pulled from the walls by the time the work week rolls around. The first time, in May at Soulful Soups & Spirits, the paintings hung through the weekend, when a bar crowd dominates. By the time of Monday’s lunch rush, however, they were taken down. Owners feared that the paintings would offend their mostly vegetarian customer base.

Then, earlier this month, Desmond got a similar message from managers at Far West. “It was almost verbatim what I’d gotten from Soulful Soups,” Desmond says. “I thought someone was playing a joke.”

“I have a couple of vegan and vegetarian customers who were offended by it,” she says. Not just customers, though. Regulars.

Far West has shown graphic art in the past — in May, another local artist, Gabriel Vrooman, hung works that included people eating other people and two men licking a stream of blood. Millspaugh says the content wasn’t really part of the equation. “We generally don’t have a problem with any of the art we show,” she says. “It can be sexually explicit — we’re a bar, we don’t have to worry about kids coming in. We’ll hang anybody’s art — that’s been our motto.”

Their other motto, though, she says, is “business is business.”

If the show was up for a month and the people who complained stopped their once-or-twice-a-week drop-ins, “that’s 40 bucks each,” Millspaugh says. “Then, at that point, after they’ve been gone for a month, maybe they decide not to come back.”

Soulful Soups took a similar tack. “We enjoyed his show for all of First Friday weekend and received a great many compliments on his work,” owner R.J. Portman said. “But the reality of us owning a primarily vegan-vegetarian restaurant by day had to kick in by Monday morning.”

For Millspaugh, it’s pure mathematics. It could have been Care Bears on the wall. If a good customer had threatened to stop coming in, they would have come down.

For Desmond, it’s fear, and something approaching censorship:

“It’s a weak move to remove art if you’re afraid of it,” he says. The other artists hanging with Desmond — Casey Lynch and the artist Nory — had similar feelings. They pulled their art from the show after Far West pulled Desmond’s.

In solidarity with the artist, Neato Burrito has since hung the paintings, printing a promotional poster that reads, “THE BABY BARS NOT SCARED OF DESMONDS MEAT.”

Ryan Desmond does a lot of realism. He loves painting the minute details of his subjects, finding their proper proportions. But he also has an absurdist streak, so rather than painting a loved one’s solemn portrait, he paints his father, squinting weirdly into the sun.

The controversy Desmond has stirred involves cuts of meat from the grocer’s case, photographed from above, then painted in acrylic at a scale of about 10 times their original size against a wash of vibrant color: a rib eye steak on yellow ochre, a turkey leg on turquoise green, a beef heart on red oxide.

They are massive — 4 feet by 5 feet, in one case — and intricate. They are inquiries into form and exercises in changing context. Desmond says he likes to take “an everyday object — something banal, pretty ordinary, with its own intrinsic beauty,” and get people to stare at it. “They are documentation,” Desmond says, of forms that no one really takes the time to look at. “Cuts of meat are really pretty gorgeous.”

Yvonne Millspaugh says she may not have had to pull the paintings if they weren’t so large. Desmond, though, says the size is precisely the point.

If you don’t have to look, you probably won’t. How often have you sat and really stared at the chuck roast at Albertson’s?

On June 5, Ryan Desmond sent me a text. It said, “FYI, my works are getting pulled again. The vegans must have it out for me.”

The way this controversy has played out — both Far West and Soulful Soups citing unnamed “vegans and vegetarians” — it’s easy to imagine a vast, pro-animal conspiracy.

But Crystal Clark, founder of the Spokane Vegans, doesn’t think that’s it. In addition to being a vegan, she’s a member of Riverspeak, a local arts collective. She’d heard about the Desmond controversy, but from her artist friends, not other vegans.

The content of Desmond’s work doesn’t bother her at all. She admires the technique. “The detail of the fatty tissue is really impressive,” she says. She understands how it could offend, but “anyone can be offended by anything.” To begin giving lone voices the power they’ve been given in this case is to cross a dangerous line between respect and censorship.

“I think most of us can agree on certain things that are so extreme as to not be art,” Clark says, things like child pornography and depictions of mass murder. “This is not that.”

Bernadette Vielbig is an artist, radio host and instructor at SFCC who has been an outspoken critic of the way Spokane supports — or fails to support — its artists. She sees what happened to Desmond as business partners backing out of their end of a deal. The owners in these cases have gotten a sales bump from the crowd that First Friday draws, she says, but they’ve then bailed on the artists for fear of chasing away their regular clientele. The artist benefits most from exposure to the regular clientele, not the art-savvy First Friday crowd, she says, “so the artist is getting used twice.”

She says artists should only enter into binding contracts with establishments that know and respect an artist’s work. What happened to Desmond “[is] censorship in one way,” she says, “but it’s more stupidity, in my opinion — and just kind of rude to the artist and the arts community. I hope it would rally people to engage and require a little more professionalism.”

Recently, Ryan Desmond came upon some morel mushrooms, growing wild at the base of a large tree. As he knelt down to pick them, he got close enough to appreciate their form. “I thought they were really beautiful,” he says. He began thinking about painting them for inclusion in the cycle.

But after the recent controversy, painting something other than meat might be seen as giving in to the same pressures that Soulful Soups and Far West caved under. “They’ve become politicized,” he says, “so now I don’t want to, out of principle.”

Desmond didn’t intend his paintings to be controversial, but that’s what they’ve become.