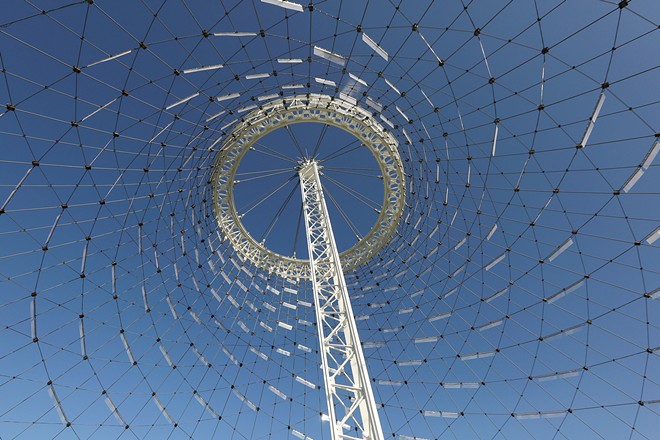 YAY, US!
Riverfront Park's U.S. Pavilion is a gem in Spokane, we all know that. But the world outside the Lilac City knows that, too. Just last week, the high-falutin' Design Build Institute of America hit the Pavilion with three awards. It won the National Award of Merit, and it took the trophy for 2020 Best of Architecture Design. But best of all, it won the DBIA's 2020 Project of the Year. In a year with little to celebrate, there's a good reason to raise a toast if I've ever heard one. (DAN NAILEN)

REAL POLICE CORRUPTION
Bosch (Amazon Prime) is another serialized cop show with a gruff line-crossing detective at its center. With six seasons streaming, it's the perfect show to watch in the background while doing dishes or folding laundry. One thing it does well is, instead of merely focusing on good cops who break rules because it's the only way to get a conviction or bad cops who extort suspects, it showcases more common forms of corruption that police departments undertake. For example, police leadership — concerned about public perception and departmental morale — pressures an officer to handle reports of an unethical cop's behavior quietly "in-house" instead of filing a complaint. (DANIEL WALTERS)

CLOSE ENCOUNTERS
Podcast Radio Rental features stories that are uncanny, unexplainable and simply straight-up creepy, told quite effectively by the people who experienced them. Save for some truly dorky "host" segments featuring a video store clerk played by Rainn Wilson, the show boasts some pretty gripping tales — including a young boy's bizarre interactions with a little girl in the woods, a man who receives increasingly alarming texts from an unknown number, a teenager who gets weird vibes from her fellow camp counselor, and multiple close calls with serial killers. Skip the scripted parts and you'll hear some cracking good horror yarns. (NATHAN WEINBENDER)

EVER SERVE TIME, DOC?
Like many a home-sheltering book lover, I've spent a good portion of the pandemic expanding my literary horizons a bit, tackling some "I should read that" material. But I've also gone for light comfort reads, the intellectual equivalent of a favorite frozen pizza. That's where Nick de Semlyen's Wild and Crazy Guys comes in, taking a microscope to several comedy stars of the '80s (all male, sadly) and tracking how their various careers soared (Steve Martin, Bill Murray), sputtered (Chevy Chase) or just went completely off the rails, at least for a while (Eddie Murphy). If you're someone who quotes lines from Fletch, Beverly Hills Cop or Meatballs, this book's for you. (DAN NAILEN)

THIS WEEK'S PLAYLIST
Some noteworthy new music hits online and in stores Nov. 6. To wit:

ALTER BRIDGE, Walk The Sky 2.0. Local Myles Kennedy and crew deliver an EP of six live cuts and one new tune written and recorded during the pandemic.