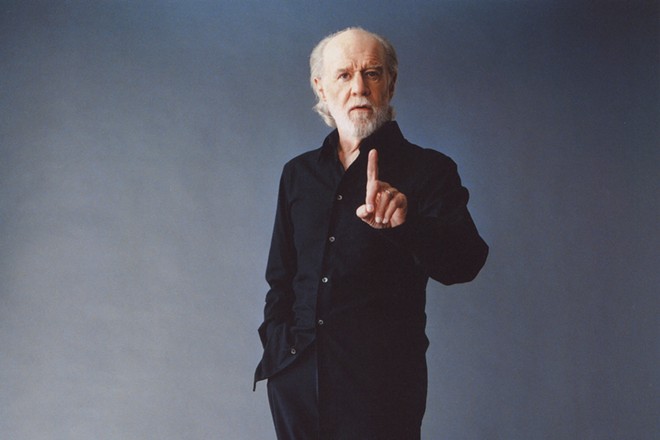 STAND-UP STANDOUT
Even if you didn't consistently see George Carlin videos flying around social media in 2022 to illustrate how "ahead of his time" the politically astute comedian was, he'd still be worth the exhaustive documentary treatment directors Judd Apatow and Michael Bonfiglio give him in HBO's new GEORGE CARLIN'S AMERICAN DREAM. His path from straight-laced stand-up to counterculture icon to comedy elder statesman when he died in 2008 is full of fascinating turns — often fueled by his abusive childhood and addiction issues as an adult for both he and his wife. I've been a Carlin fanatic since discovering him in the '80s, and there is plenty "new" to me from his wilderness years, from embarrassing gigs on '70s TV shows to being so out of touch and wasted that other comedians used him as a punchline. This guy didn't just have a second act, he had several, and they're worth exploring for newbies and old fans alike. (DAN NAILEN)

SEASIDE TEMPTATION
Gothic romance fans won't want to miss Apple TV+'s six-part series THE ESSEX SERPENT, a moody period drama based on a 2016 novel. The wealthy, recently widowed wife of an abusive husband, Cora Seaborne (Claire Danes) finally finds freedom to explore her true passion, natural history, and departs gloomy 1890s London for a rural fishing village to investigate reports of a mythical beast lurking in the murky tidewaters. Naturally, locals are suspicious. Clinging to religion and superstition, they believe the serpent's appearance was triggered by sin. But Cora wonders if it's actually a prehistoric beast that escaped evolution in isolation. Complicating matters, married village vicar Will Ransome (Tom Hiddleston) falls for Cora's wit and charm. The Essex Serpent is captured in rich, saturated colors, with impeccable costuming and supporting roles, and plenty of clever literary symbolism. (CHEY SCOTT)

SOCCER MOMMY, SOMETIMES, FOREVER. Sophie Allison continues to cement her place near the top of the indie singer-songwriter ranks with another collection of emotional resonant songs.

LUKE COMBS, GROWIN' UP. The 2021 CMA Entertainer of the Year looks to top the charts once again with more Carolinian country jams. (SETH SOMMERFELD)