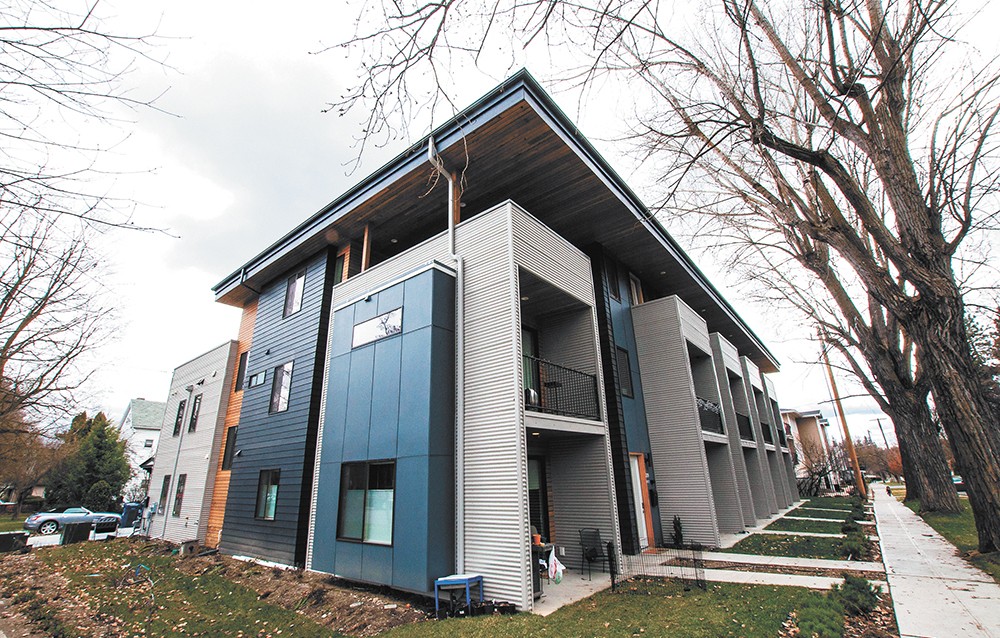 Daniel Walters photo
Browne's Addition developments like this one, featuring modern designs, have sparked the historic neighborhood to push for a slew of new exterior design standards.

In 2018, the Spokane City Council passed an ordinance handing the city's oldest neighborhood a powerful tool to shape its future. And last month property owners in Browne's Addition became the first neighborhood to take advantage of the ordinance, voting to put a historic district overlay onto the Browne's Addition zoning map. Now, anytime a developer wants to build a new home or put in a major exterior renovation to an old one, they'll be graded by the city's Historic Preservation Office and the Landmarks Commission on how well they meet a slew of new design guidelines.

"Historic Browne's Addition Saves its Soul!" Beggs wrote in email to supporters. "The law to help neighborhoods was opposed by the Washington Association of Realtors and their PAC spent well over $100,000 during the primary attempting to defeat council members, like myself, who supported this new option for Spokane neighborhoods."

Meanwhile, Tom Hormel, chair of the Washington Realtors PAC, says he hasn't dug into the nitty-gritty of the ordinance, but he does worry that historic preservation districts could have unintended consequences, driving up home prices and constraining the addition of more housing.

"It's funny when they're talking about growth, and then they put out something that limits growth," Hormel says.

As the pro-density and pro-environmental group Sightline points out, historic preservation has often been deployed as a weapon against affordable housing complexes and denser developments.

"When historic preservation cuts into home production, the people who pay most dearly are those with the least housing security," writes Sightline's Dan Bertolet.

But the new Browne's Addition Historic District Design Standards stretch across more than 70 pages, laying out exhaustive guidelines for how new and renovated developments should match the style of nearby properties.

"Avoid introducing nontraditional stone and brick colors to foundations through parging and painting," one guideline says, while another pushes certain property owners to research old fire insurance documents to ensure that renovated porches imitate the designs of the old ones.

"It will be a conversation with a developer to try to come with a compatible design," says Logan Camporeale with the city's historic preservation office.

Beggs offers the Bavarian-themed Washington town of Leavenworth as a crude example: You can still build a McDonald's in Leavenworth, it just has to be done up in a Bavarian style.

"It comes down to style more than substance," Beggs says. He says the city even offers modest incentives to make certain rehabs possible.

But Hormel argues that aesthetic regulations unavoidably drive up prices.

"When I put in 100 more stipulations into how you have to build the house, that adds to the cost," Hormel says.

Most property owners in the Browne's Addition historic district supported it. But one Browne's Addition developer, Bob Cooke, argues that the restriction could constrain the growth of housing in the neighborhood. He says he knows another developer who had plans to tear down a duplex and put up a larger apartment complex, but abandoned his plans after the historical district was approved.

"Why would a developer go in and throw the dice, knowing that he's going to have an uphill battle?" Cooke asks.

BUILDING ON THE MIDDLE GROUND

For all the concern, however, Hormel says that the ordinance wasn't a determining factor in the Realtors' endorsement of Stuckart and Beggs' opponents.

Those candidates' views remain a mystery. Beggs' opponent, Cindy Wendle, portrayed herself in a recent Inlander interview as a candidate who could build consensus between neighbors and developers, yet declined to say whether she would have voted for the historic preservation ordinance.

"I'm not going to answer that. I wasn't part of that process with Browne's Addition. I don't know," Wendle says. "I do want to recognize that we're in a housing crisis. I'm not saying I would have voted against it or not."

Stuckart, in launching his mayoral campaign, explicitly painted himself as a candidate willing to lead the charge for more dense urban development, even against neighborhoods that fretted about low-income apartment complexes and clashing aesthetics. He criticized citizens who opposed his infill development efforts because they had "steeped roofs" in their neighborhoods and didn't want "flat roofs" in their community.

Last month, Stuckart and Beggs sent out black and-white-fliers to neighbors in Browne's Addition bragging about the historic preservation ordinance and their record of protecting local neighborhoods against "development proposals that would create traffic congestion and have negative environmental impacts."

Stuckart, however, argues that his support for the historic preservation ordinance isn't a contradiction of his other efforts to increase urban density, like easing height restrictions and parking requirements.

"I think we should be focused on our centers and corridors that we've designated," Stuckart says.

While Browne's Addition is next door to the downtown core, it's not technically one of the city's official "centers and corridors" intended for concentrated growth.

The neighborhood is already one of the densest neighborhoods in the city, and that density has triggered decades of frustration over traffic and on-street parking.

Yet other neighborhoods — like Cliff Cannon and Peaceful Valley, Beggs says — are also interested in using the historic preservation ordinance to create their bevy of design regulations.

"We need more infill housing," Beggs writes to his supporters, "but we can accomplish it Spokane style without turning over our laws and development to the powers on the west side of the state." ♦

The original print version of this article was headlined "'Spokane Style'"