Anyone can say anything they want at Spokane City Council meetings; is this the best way to get the public's input? 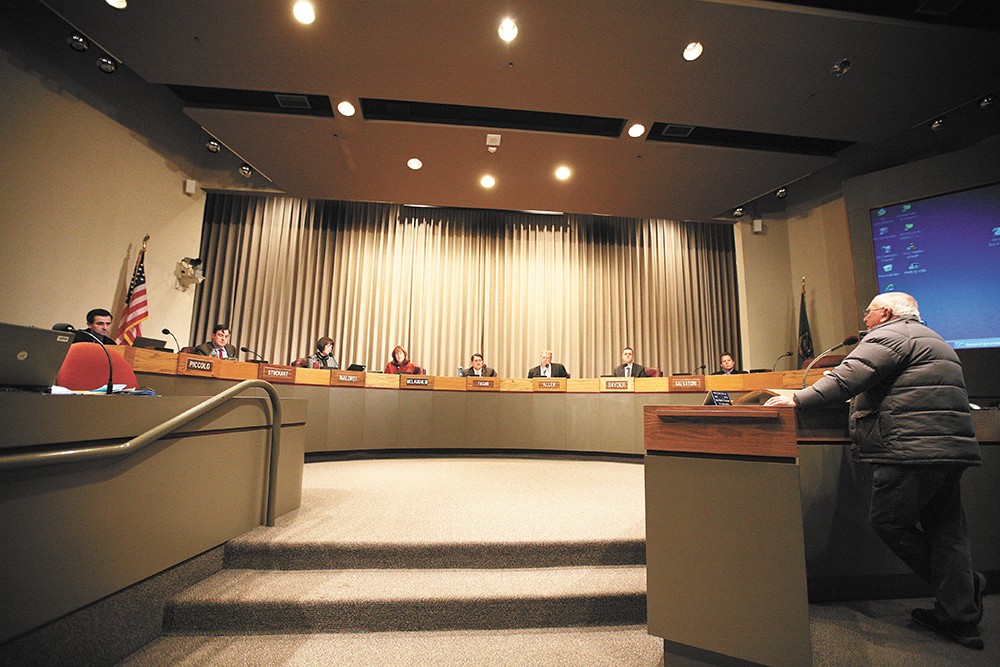 Young Kwak
George McGrath, a regular speaker during public testimony, gives the Spokane City Council a piece of his mind.

It's the most democratic three minutes in Spokane.

After Council President Ben Stuckart gavels the city council's evening legislative session to order, after the Pledge of Allegiance and a couple of proclamations are read, it's time for open forum, when anyone gets three minutes to share their thoughts on almost any subject with the city's lawmakers. And they do just that almost every Monday evening.

Alan McDowell uses his three minutes to warn the council of the perils of legal marijuana and how the pharmaceutical industry is falsifying research. He also mentions his quest to find his missing weightlifting records from high school.

Rick "Harpman Hatter" Bocook uses his three minutes to complain about harassment of street musicians and his sidewalk chalk art being washed away by business owners.

Gabriel Elliott uses his three minutes to tell the council about weekly meditation classes, "satanic sex" and eating human flesh before ending with a "namaste."

Then there's the parade of activists who show up to speak on a range of issues. Some rehash arguments on a proposed ordinance to mandate sick-leave time for workers. Others talk about the city's sit-lie ordinance. Others still complain about Planned Parenthood or about illegal immigration.

And then there's George McGrath, a civic gadfly who shows up nearly every week to berate the council and has been removed from meetings several times over the years. Lately, he's been using his three minutes to talk about abortion in graphic detail.

The public can email, call and send letters to the council, but councilmembers say it's not the same as hearing from constituents in person. Shortly after the 2011 elections, the council added an open forum at the beginning of council meetings in addition to the existing one held at the end. Stuckart had hoped that the additional open forum would foster better dialogue with the public.

But it isn't working as he had hoped. Stuckart and others are now concerned that this effort at openness has, at times, created a negative tone for meetings and is keeping some people from bringing their concerns about city business to the council.

Stuckart says that he will ask the council to consider changing the rules for open forum after the November election, when Councilman Mike Allen retires and two other councilmembers could be unseated by challengers. Currently, there's an open forum at the beginning of meetings that's limited to 30 minutes and another at the end (unless it's after 10 pm). Stuckart isn't sure what the change will look like, but it might include a monthly open forum.

"Public comment is supposed to be for the public and if you hear from the same people week after week, you're not getting a wide variety of opinion," says Stuckart. "So I want to see if council will switch it up to make sure there are more diverse opinions."

During his six years on the city council

"Public comment is this awesome fail-safe device to bring our attention to important issues that we are missing in some way," he says.

Councilman Mike Fagan, the council's most conservative member, has in the past used his AM radio show to encourage people who disagree with his more liberal colleagues to give the council a piece of their mind. Fagan opposes changing the council's rules on open forum.

"The public are the ones that put us there in office," says Fagan, who questions how seriously his colleagues treat open forum. "We should be respecting their First Amendment rights to let them express displeasure, pleasure, concerns, whatever they've got on their minds."

Holding only one open forum at the end of the meeting, says Fagan, would be unfair to the public because they wouldn't know how long they'd have to wait while council finishes business before being allowed to speak. Snyder says that it's a tricky balance, and he probably supports the current arrangement.

Debra Robole, the council's senior research and policy analyst, has been researching how other cities handle public comment and found that Spokane stands out. Other cities require advance sign-up to speak or allow their council's chair to limit public comment. She also found that neither Boise nor Tacoma have open forum periods like Spokane's. Instead, they only allow the public to comment on specific agenda items.

"I'm also noticing, that as my term goes on, [open forums] are getting more and more negative, and it sets a tone for the whole meeting," says Stuckart.

In May, Stuckart asked McGrath to stop using the phrase "bridge to hookerville" to refer to a planned pedestrian bridge during open forum, saying that people complained that the phrase is offensive. In weeks following the dustup, supporters of McGrath turned out for open forum, peppering their speech with the phrase. One man said it 30 times in a row.

Councilwoman Karen Stratton, who is also concerned about the tone set during open forum, says the current arrangement creates another problem; citizens who want to comment on a specific council resolution or ordinance are reluctant to come down because they don't know how long open forum will go.

"I have had people with children at home worry about who will watch kids while they run down [to speak on an agenda item]," says Stratton, who is open to a rules change.

as council president, was a fierce defender of the council's rules of decorum, even once kicking out a mother with her restive child.

Shogan says he warned Stuckart about introducing another open forum at the beginning of the meetings. Now, says Shogan, council meetings are "totally unhinged."

"I don't worry if [citizens] had to stay late or not," says Shogan of having one open forum later. "The point of council was to do the council's business, not have open forum." ♦