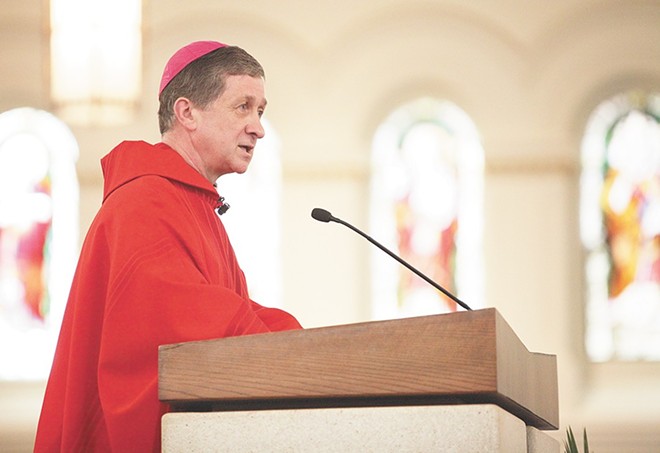 Young Kwak photo
Despite his stated intentions to tamp down in some of the biggest Catholic culture war controversies, Cardinal Blase Cupich has been sucked into them.

There's a central irony to Cardinal Blase Cupich, Spokane's former bishop. He wants the church to calm down when it comes to some of the Catholic church's most divisive internal fights. He wants to focus on the larger mission of the church. He talks about eschewing "caustic language." He was all about "defusing hot wires." He worried about a "toxic and polarizing" climate around our conversation around abortion.

But yet, in trying to crank down the heat of the Catholic culture wars, he himself has become an incendiary figure.

In a way, the reactions to Cupich have echoed those of another Chicago-area leader — former president Barack Obama.

Like Obama, Catholics on the left portray Cupich as an inspirational and transformational figure, whose relatively moderate words aim to transcend partisanship and move the Catholic church toward a more complex, nuanced and tolerant direction. They praise him for breathing new life into the Catholic church, for capturing the spirit of Pope Francis, for his comments saying that he stood with the gay and lesbian community after the Orlando nightclub shooting.

But Catholics on the right portray Cupich as imperious, distant and far too liberal. They argue that his views, at times, border on heresy and even threaten the future of the church. They slam him for locking Latin-rite Catholics from Easter services when he was bishop of Rapid City, for discouraging seminarians from praying the rosaries outside abortion clinics when he was bishop of Spokane, and condemn him for removing a gay-flag burning priest as archbishop of Chicago. They note how he banned, without explanation, pro-life blogger Mark Shea and conservative Catholic radio broadcaster Al Kresta from speaking at the Spokane Diocese, but welcomed Jesuit James Martin — the author of a book on how Catholics should respect gays — to speak in Chicago.

Lately, hard-right groups like the Church Militant have been using Cupich's connections to disgraced abuser Theodore McCarrick to call for Cupich's resignation.

Zach Hiner, current director of the Survivors Network of those Abused by Priests, says the motivations of some of these groups, like the Church Militant, aren’t exactly pure.


“They co-opt the survivor movement to push an anti-gay agenda,” Hiner says about the Church Militant. “This happens to be a helpful cudgel.”


We've rounded up some of the reactions to Cupich, both in print and in interviews, to give you a flavor of the praise and rage that has accompanied the former Spokane leader's rise to prominence.

Last night, watching the fifth installment of Ken Burns’ The Roosevelts, Jon Meachem was explaining that, as happens at key moments in history, in FDR and Churchill, the moment had found the men it needed. Also last night, my cell phone and emails were on fire as the news broke that Bishop Blase Cupich was to be named the ninth Archbishop of Chicago. Again, the moment found the man. ...

This is not an incrementalist choice. This is not a balancing choice. The selection itself tells us a great deal about what the leaders of the American Church felt was needed at this moment, not just about Cupich’s obvious suitability for the job.

I can think of very few bishops in the U.S. who have shown themselves to be more allergic to the culture war model than Cupich. ... His courageous article in America magazine about the role of racism in the 2008 presidential election shows him to be not only a critical thinker but a pugnacious defender of human dignity. ...There is nothing lukewarm about this man.

... There is this morning a sense of possibility that I did not discern yesterday morning. It is a great day to be an American Catholic.
"Cupich is, par excellence, a bishop for the era of Francis: engaged, sympathetic, compelling. If only the rest of the body of bishops would follow his lead."


"You have to see this riveting video of Cardinal Cupich," 2016:

Cupich is, par excellence, a bishop for the era of Francis: engaged, sympathetic, compelling. If only the rest of the body of bishops would follow his lead.


Cupich, now the bishop of Spokane, Wash., has been described in media accounts as a “moderate” within the Catholic Church. Temperamentally, this is exactly what he is, an advocate of dialogue and civility. He’s also wise about rejecting labels.

He has been a courageous voice inside the U.S. Conference of Catholic Bishops against a culture-war approach to evangelization and politics that pushes so many away from the Gospel.

He has also been as tough as any prelate in his candor about the church’s profound failures during the sex abuse crisis.


This guy is not lukewarm about anything... He's a guy that doesn't shy from a fight, and that's exactly what the Catholic Church needs... His legacy is the momentum from a time of darkness to a time of great hope and enthusiasm, in just four years. And in the cycle of the Catholic Church, where everything moves at prehistoric speeds, that's amazing.


After 12 days of being at the [Synod on Marriage and Family in Rome], Cupich’s presentation was the most refreshing pastoral contribution I have heard yet.

While this synod may not produce our hoped-for outcomes, I had a sense today that if Pope Francis continues to appoint bishops in the mold of Cupich, the next synod, or any future discussion of marriage and family, will certainly be very positive.


James Martin, S.J., author of Building a Bridge: How the Catholic Church and the LGBT Community Can Enter Into a Relationship of Respect, Compassion, and Sensitivity
Inlander interview,  2019:

Cardinal Cupich has certainly risen to the fore as a leader in the U.S. church. It’s inevitable that some cardinals and bishops may not agree with him on certain things. I think he would all agree that he’s a powerful voice in the Catholic church today. He is blunt, thoughtful, and no-nonsense.

He’s always focused on the poor and the marginalized. He's focused on getting to the bottom of the abuse crisis. He’s focused on, more broadly, the Gospel. The heart of his message is Jesus. That sometimes plays out in ways that may or may not seem political.

Even when he was bishop of Spokane he was a powerful force the U.S. Bishop’s Conference. He was an outspoken bishop of the floor of the U.S. Bishop Conference meetings. He didn’t have to wait for his red-hat as he called them, to start speaking out about topics on the poor and the marginalized, and the church in the United States being more of an advocate for them. I remember thinking when he as appointed to Chicago, it would give him a bigger voice.

He’s been very welcoming to the LGBT community.


By not inserting his office into conflict situations, Cupich has often, whether intentionally or not, quietly ceded much ground to one side, and without advancing his principles. ...

My advice to Catholics in Chicago? Your new archbishop is a very nice man; he is also very intelligent and talented.... But he tends to be — to use a polite phrase – “conflict averse.”


Cupich frequently bashes the free market, touts extreme environmentalism, and soft-pedals the church's teachings at odds with a relativistic culture.

... That Pope Francis gave one of the most important archdioceses in America to Cupich contained unmistakable meaning for U.S. Democrats. Pope Francis had been advised by conservative Vatican officials not to select Cupich, but he brushed off that advice ...

Cupich represented for Francis, the prototypical bishop: a left-wing political activist who energizes church's critics while leaving conservative Catholics out in the cold.


Don’t expect the pope or the bishop to tell you what to do. Daddy’s gone. Now you’re the man of the house.

No one born in the last forty years will be surprised by this rhetoric. There was the cool dad who winked and left you two alone, the cool dad who told you he didn’t keep count of the beer ...Even when the matter was trivial, the refusal either to forbid, or to accept responsibility for permitting, made him something less than a father. He told us to act like adults so that he didn’t have to.

Maybe this is all just a hapless attempt to render Catholicism cool. It would not be the first time a father tried to appeal to his children by embracing pop culture and refusing to say no. But like every dad who tries to be cool, Cupich does not quite succeed.


Cupich’s version of the Church is so welcoming, it padlocks a parish during Easter. https://t.co/uMLhcCWIQy

Reminder, these men make in-jokey references to their peccadillos with impunity.

“Chicago cardinal Cupich lauds McCarrick for his ‘own unique way of making a mark on the church.’” https://t.co/2JCZbmIN90

Nor were his progressive appointments necessarily all that liberal, by the standards of the secular world or liberal Protestantism. Their inclinations were evident enough in what they emphasized and what they didn’t say: You could read an awful lot of Blase Cupich sermons without finding anything that would make a Democratic Party functionary the least bit uncomfortable.


I definitely had a fix on him as one of the most liberal theologically in the American hierarchy. ...

I can say that my friends in the Chicago Diocese, the more conservative priests, feel like they’re under fire. ...

He has pushed the envelope sometimes because of his terms of loyalty to Pope Francis, to the point where he’s almost insulting our intelligence.


Cupich to me comes off like a political operator. He’s climbed up the ranks. He’s done nothing of substance...

I think there is a lot of animosity toward Cupich...  It's always been about politics to him. His statements are banal. He’s like a human dial tone. It’s deeply frustrating that he’s risen to where he is.


Stephen Brady, president of the Roman Catholic Faithful, a hard right activist group that has been going from city to city to dig up dirt on Cupich
Inlander interview,2019


It’s not an act of charity to allow one’s Cardinal to run headlong into hell. When he’s promoting mortal sin, the guy’s putting his own soul into danger.
...
He’s promoting the homosexual lifestyle. The man is not Catholic. He can’t fear God. He doesn't know the meaning of love and charity.