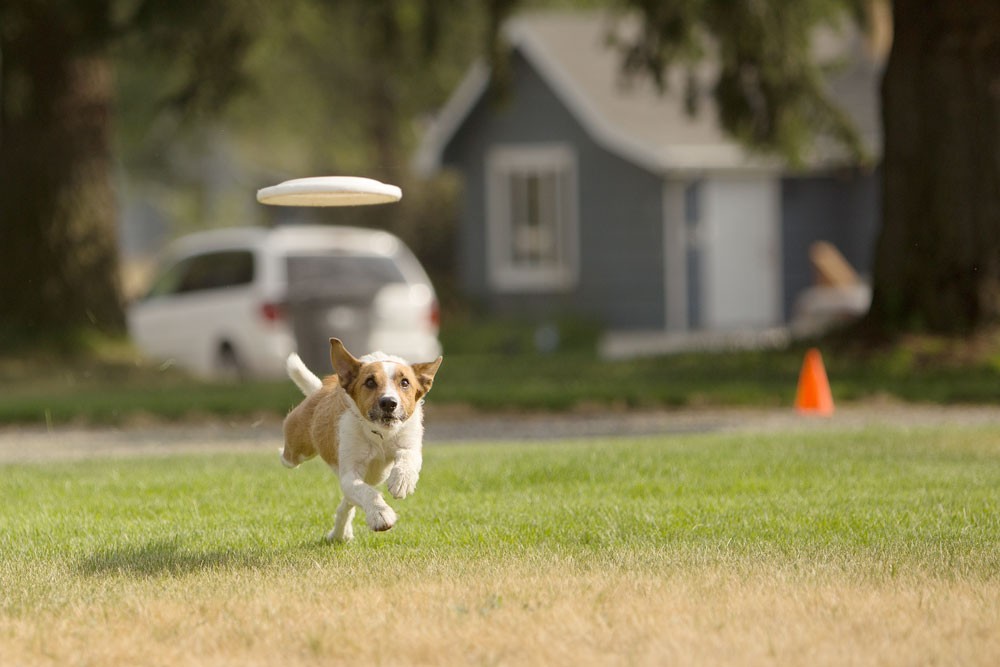 Young Kwak
Walter, a Jack Russell Terrier-Border Collie mix, runs down a Frisbee during a demonstration.

Bunches of grass clippings burst up in tiny clouds behind Walter's feet. Tearing across the lawn as fast as the cars cruising at 30 to 35 mph down the residential street, the little rust-orange-and-white dog suddenly springs into the air. For a split second he's completely suspended. Then his long, narrow snout clamps down over the sailing white disc with a dull clap, and Walter touches back down again.

The small group of human spectators across the yard erupt in applause and praise as the Jack Russell-Border Collie mix, looking more Russell than collie, circles back to his owner, Michael Paul. The Frisbee with the dog's name in black lettering hangs crookedly from Walter's mouth.

"He doesn't really care about much unless he has his Frisbee. He will not stop," Paul says, flicking his wrist and sending the disc across the lawn again. A few tosses later, Paul forces a reluctant Walter to take a break and drink some water.

Walter and Paul have adhered to this throw-chase-repeat routine since the pup, now 2½ years old, was about four months.

Right now, the man-best friend duo is prepping for several upcoming local competitions between Frisbee-dog enthusiasts and their canine companions, hosted by Spokane Disc Dogs. The next couple of events are to be Walter's third and fourth, and Paul has his eye on the first-place trophy, as long as he can toss the Frisbee inbounds.

Young Kwak
Kelty gets in on the action.

"It's about keeping it inbounds and not getting nervous. I have a tendency to get nervous," he admits.

For basic distance and agility disc competitions, like those hosted here by Spokane Disc Dogs, dog/thrower (throwers don't have to be the dog's owner) teams compete in two separate one-minute rounds. The competition field, a stretched hexagonal shape, is 50 yards long, 10 yards at each end, and widens to 20 yards at the center. Points are awarded based on which of five zones within the field the dog catches the disc. Dogs get a half-point bonus for catching a disc with all four paws in the air, and a competitor's score is the combined point total from each toss during the two rounds.

All Spokane Disc Dog competitions are free for owners and their dogs to compete in, and for spectators to watch.

That accessibility, says organizer John Barringer, is largely what drew him to the sport. His own Frisbee dog Bonnie, a 13-year-old Australian shepherd, recently retired from competition because of her age and arthritis, so Barringer now focuses more on promoting Spokane Disc Dogs' local events.

"You can tell the special bonds between the dogs and the owners, and it's just so cool to watch," he adds.

Spokane Disc Dogs follows competition rules and regulations outlined by Skyhoundz, the international Frisbee dog competition arm of Hyperflite, a maker of competition and recreational discs. The group currently hosts four events annually, each attracting more than a dozen owner/dog teams, and an even larger number of spectators.

In the coming week, on Saturday, the Frisbee-dog group is performing at the Inland Northwest Camaro Club open car show in Spokane Valley. Four days later, on the evening of Aug. 13, the Spokane Disc Dogs Championships are being held in Shadle Park. Then the big final event of the year, in September at Valleyfest. That's where Walter and Paul got their first taste of competitive disc-throwing a year ago.

Walter may be fast and fresh, but the sport runs in Kelty's blood. After the two dogs have cooled down on a recent Friday morning, Walter begs for another toss. Speeding out ahead of him in the yard is Kelty, her long, silver fur flowing. Before he knows it, Kelty has snatched Walter's white disc from the air, right above his nose. ♦