Blackbird reopens, a new restaurant in Kendall Yards and other Spokane food news 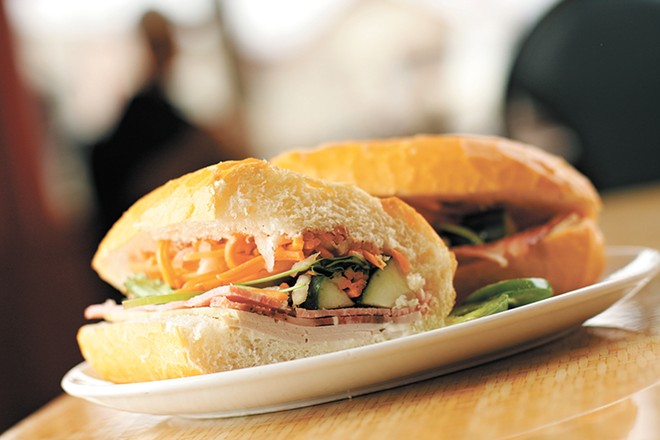 Young Kwak
No word just yet on when Vien Dong's beloved banh mi will return.

The Blackbird reopens with barbecue focus
After a two-week hiatus for some light remodeling and a menu overhaul, the Blackbird Tavern + Kitchen in downtown Spokane reopened on April 16 with a new Southern barbecue smokehouse focus. As part of the aesthetic changes, the restaurant's entrance is now adjacent to its patio. Inside, booth seating backs were lowered to create a more open feel. And when customers enter, they can now order up front from a kiosk, a hostess or choose traditional table service. The new menu features house-smoked barbecue meats: brisket, chicken, ribs, pulled pork, hot links and vegetarian-friendly jackfruit, which all can be ordered as plates with two sides, tacos, sandwiches or "just the meat." The Blackbird is maintaining its weekend brunch service, and continues to serve a massive selection of bottled and draft craft beers. (CHEY SCOTT)

Vien Dong restaurant is moving
The popular local Chinese and Vietnamese restaurant in East Spokane currently has a sign posted in the window stating that it's permanently closed at its longtime location at 1730 E. Sprague as of April 16. Fear not, fans of Vien Dong: the restaurant's raved-about pho soup and banh mi sandwiches are simply moving to a new location at 3435 E. Trent, which was once home to a place called Crossroads Restaurant. No reopening date for Vien Dong has yet been announced. (CHEY SCOTT)

Shogun Restaurant burns down
After an early morning fire this past weekend, the longtime Japanese sushi and hibachi restaurant in East Spokane, at 821 E. Third, was destroyed. Opened in 1992, Shogun was a local favorite for its theatrical dining experiences offered at the hibachi grill tables, where chefs prepared meat, vegetables and rice in front of customers. Shogun was also home to a sushi bar and a full bar serving cocktails, sake and imported Asian beers. No word yet on whether the owners will rebuild the restaurant. The building is reported to be a total loss. (CHEY SCOTT)

Park Lodge in Kendall Yards opens this week
The newest restaurant to join the growing downtown neighborhood of Kendall Yards is set to open this Friday, April 27. Park Lodge is located in a new building on the development's west end, across from the Olmsted Brothers Green park, and right along the Centennial Trail. Owned and operated by Spokane chef Philip Stanton, Park Lodge's menu highlights in-season produce and meats grilled over a custom-built, wood burning hearth. Stanton describes the menu as Mediterranean-influenced comfort food, although the creative plating of each dish — like Park Lodge's chili — will probably look quite different (in a good way) than what many diners may picture. We'll share more on Park Lodge in a future issue of the Inlander. (CHEY SCOTT)

Mountain Lakes Brewery opens downtown
The downtown craft brewing scene continues to grow with the opening of Mountain Lakes Brewery on April 12. Co-owners Dave Basaraba and Tim Hilton began homebrewing in a garage after transplanting to Spokane from opposite sides of the country. Now, the pair are taking their hobby to the next level on a small system capable of brewing up to three barrel (90 gallon) batches. Located next to Lion's Lair bar, the taproom is styled with decor representing Basaraba and Hilton's passion for the outdoors. The taps are poured by canoe paddle handles and feature several classic beer styles. Mountain Lakes' most recent release is the Espresso Blonde Ale with cold brew from nearby Spaceman Coffee. (DEREK HARRISON) ♦

The original print version of this article was headlined "What's Cooking"