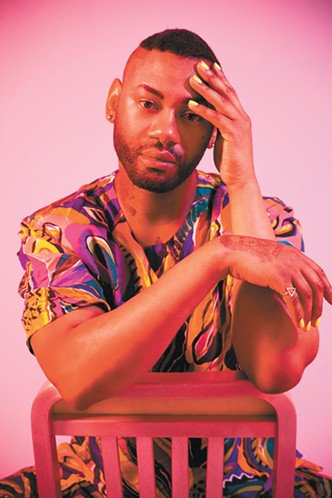 Throughout the history of pop music, such artists as Little Richard and Prince have expressed masculinity in ways outside societal norms. That's nothing new. But when it comes to the male-dominated and often gay-bashing world of hip-hop and R&B, conversations about gender stereotypes are occurring more openly than ever, according to Portland-based R&B artist Chanticleer Trü, known onstage as Chanti Darling.

He believes it's up to queer artists like himself to keep the conversation moving forward.

"We're challenging people in different ways, and I think that work never really stops," he says. "It's evolve or die. Either you're going to fall by the wayside or change with the times. There are amazing artists challenging stereotypes about gender roles, challenging masculinity, challenging femininity, in major ways in hip-hop and R&B. And, you know, it's well noted within the industry that we've always been here."

Trü is inspired by Portland's general spirit of experimentation. "People here feel a lot less boundaries, a lot less red tape around the art you're creating and getting that art out there," he says. "You can definitely see that in the music I've been making."

In turn, Trü is helping Portland expand beyond indie-rock, the city's main musical export for many years. He says, "I've just been doing what feels good to me. I think other artists who maybe thought they didn't have a place in the music scene here started to see that, and more people have been coming out and doing their own thing. ...

"There's always been a lot of other music here in Portland that just wasn't being recognized. I think I kind of opened the door."

His music, at least, hasn't gone unnoticed. In 2016, he won a Willamette Week poll for the best new band in Portland.

Speaking with the Inlander ahead of his upcoming Spokane show, Trü says he grew up in a musical household where he was encouraged to express himself by playing piano and singing. At 10 years old, he was already leading vocal groups through a black church in Missouri, which proved to be a critical formative experience.

"When you're thrown into that environment with adult musicians, you're really, really challenged and held to a specific standard, a certain degree of developing your craft," he says. "They expect a lot out of you. You're expected to practice, you're expected to be the very best you can be, and I think that speaks to the black experience in general. You're expected to be better, because somebody who's not as good is going to have more opportunities."

The perfectionist mindset has stuck with Trü ever since. His debut album, RNB Vol. 1, earned immediate praise for its crystalline production style. He recalls "religiously" hitting the studio multiple times a week for months on end, toiling over the smallest details for hours. Producer Damon Boucher helped nail the album's retro-futuristic sound, which references classic soul and R&B songwriting but is rendered in the super-high fidelity of modern pop.

The album's emotional tone is set by Trü's lyrical focus on unrequited love and the release of tension (see: sex) — classic subjects of R&B. But his overarching goal was balancing the melancholy moments with a general sense of levity. On "Pillow Talk," for example, a bouncy synthesizer groove juxtaposes lyrics about "saying something you didn't mean to say during a sexy moment."

"It kind of takes an absurdist direction with how I lay out the story," he says. Trü isn't afraid to go there — or anywhere else — with Chanti Darling: "That's something I thought about a lot on the record, taking these lyrical elements and trying to go in the opposite direction with the music and the melody." ♦