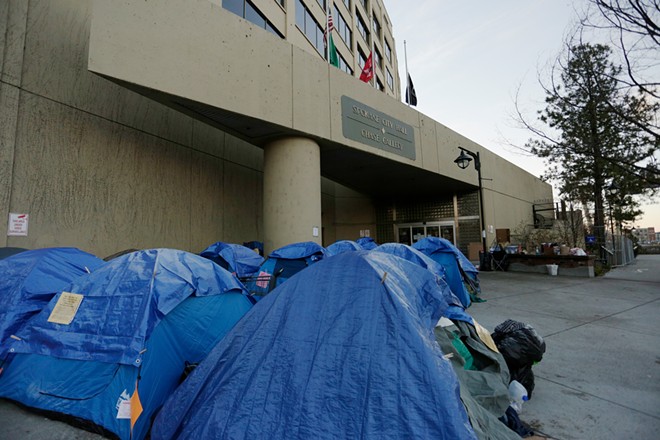 Young Kwak photo
A tent city in front of Spokane City Hall after a protest against the sit-lie ordinance in December 2018.

A few years ago, I spent my days volunteering in a building on Second Avenue that now houses a pediatric clinic. It was a low, single-story building with multiple front entrances and a partially covered sidewalk all the way around that dropped off into the blacktop of the parking lot. For years, when I entered that building, I often passed a man I'll call Reuben.

Reuben was ageless in that hard-living kind of way. The wrinkles of his sun-damaged skin, the pallor and jagged lines of teeth that hadn't seen consistent dental care, and scraggles of brown hair on his chin and atop his head all spoke to years spent on the streets of Spokane and Tri-Cities. Inconsistent meals and an ongoing struggle with meth addiction left Reuben thin and boney. He could have been 35 or 65, but most of all, he looked tired.

Sometimes the women working in the office would welcome Reuben into the building so he could use the bathroom or eat office snacks left on the break room table. Occasionally someone would hand him a few dollars. I remember thinking that if I were rich, or even middle class, I could just hand him a $20 bill on a whim, instead of walking past his crumpled frame every day on my way to try and make the world a better place.

When I first moved into Spokane city limits, it was into the first apartment I'd ever found, applied for and paid for as an adult. I was so proud to be out of college or family housing for the first time in my life — proud enough to overlook the inconsistency of my frazzled landlord, and the fact my lease stipulated that my bathroom window (which did not have a screen and opened onto an empty lot) remain open at all times for ventilation. I shrugged off the creeping mold on the sweating bathroom walls, which I sprayed with a bleach solution after my shower each morning. I accepted the mice in the walls that occasionally ventured into our kitchen, and the single basement furnace that failed to heat the building two to three times a winter. I worked a retail job that I walked to at all times of the day, regularly trekking from the world of litter and occasional piles of human waste to the gleaming fronts of downtown restaurants and into the mall where I sold clothes I could only hope to afford on clearance.

When winter came, the insides of my apartment windows occasionally iced over at the seams, and Reuben became a heap of blankets and cardboard on the sidewalk. That heap (which we occasionally checked to ensure it still contained a person) would persist in snow and rain. Almost daily I asked myself, "Am I the kind of person who is OK with letting this happen?" And almost daily, I internally answered, "No." But I felt powerless to act. I couldn't help Reuben — or any of the many unhoused people I called neighbors until their bedrooms were covered in tons of basalt — because I didn't have a spare $20. But one day I would.

One day came. I left my part-time retail gig for a full-time job that rewarded my education. I got a driver's license and an apartment with a bathroom fan and in-unit heating. My spouse and I started to enjoy a relatively middle-class existence, and our circumstances have only improved since. But I don't see Reuben anymore.

I still don't often give the random $20, mostly because I don't often carry cash on my person, but also because it doesn't seem like enough. It feels like offering a Band-Aid to someone with a bullet wound. But every winter I will donate to shelters and other organizations that help keep homeless people in clothes, hand warmers and hot meals. It's something.

When winter came, the insides of my apartment windows occasionally iced over at the seams, and Reuben became a heap of blankets and cardboard on the sidewalk.

Winter is coming again, and as a city we have the power to transcend our individual limits — to collectively address the struggle of the Reubens who are part of our community.

There are important conversations to be had about what long-term solutions look like and how different factors fit together, such as mental and behavioral health care, physical health care, debt-relief, addiction services and the honest-to-god affordable housing shortage. In the meantime, however, there are heaps of blankets and cardboard on our sidewalks. Inside them are people, members of our community, who persist regardless of the weather, in rain and snow.

Winter is coming, and while we discuss levies and public service funding, some of these people, these community members, will freeze and die. We need to ask ourselves, "Are we the kind of community that is OK letting this happen?" ♦

Jac Archer (they/them/theirs) is a local activist, community organizer and educator in the fields of diversity, equity, civic engagement and sexuality. Jac has a passion for institutional policy and making difficult concepts easily accessible.

Equity vs. Equality: It's all about fairness and the recognition that different people may need different tools