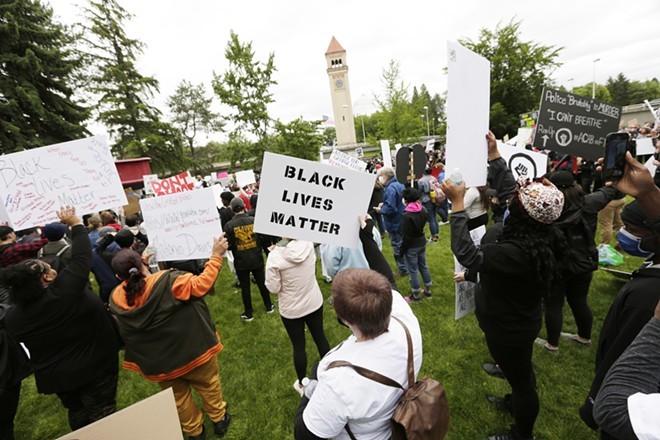 Young Kwak photo
People gathered May 31 for the first of a series of protests against police brutality in the wake of George Floyd's death at the hands of police in Minneapolis.
Two years ago, Whitworth University chemistry major Jessie Lewis used safety goggles in a lab to prevent anything from getting in her eyes.

More recently, that same pair of goggles was used for protection against Spokane Police Department’s tear gas on May 31.

When she heard about people getting affected by tear gas downtown, she went to the store to buy milk before heading to the protests related to the police killing of Minneapolis man George Floyd. She wanted to help people, offering the milk to anyone whose eyes were heavily tearing up from the chemical agent. This led to a chain of events she says resulted in her getting shot seven times with rubber bullets by police officers. 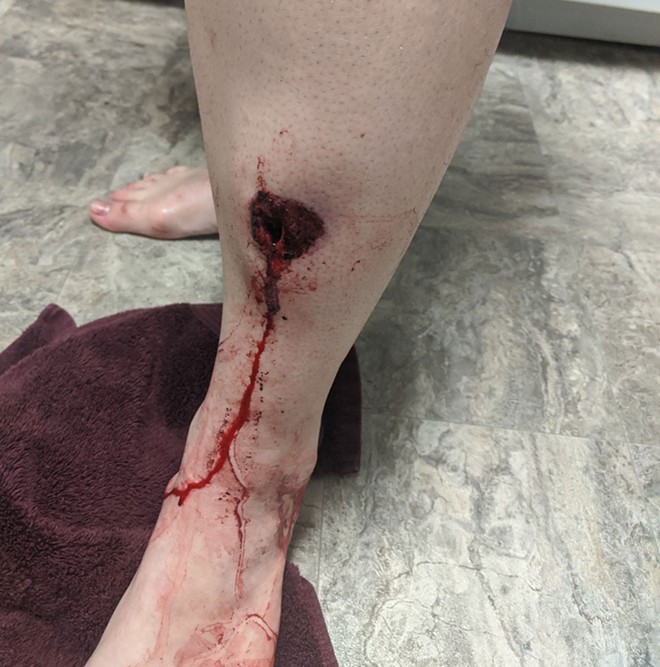 Courtesy Jessie Lewis
The pain from the damage one rubber bullet did to Jessie Lewis's leg caused her to pass out.
“I wasn’t angry, I was shocked. I hadn’t done anything,” Lewis says. “I remember it hurting, but I was so surprised that I felt like the adrenaline could carry me on.”

According to Lewis, her attempts to dialogue with the police officers were to no avail. As she tried to speak to the men clad in riot gear, her attempt was met with a tear gas canister. When she went to throw it away from the crowd, she says officers opened fire on her.

“I had to go to the emergency room,” Lewis says. “The bullet split my calf so bad that I passed out.” 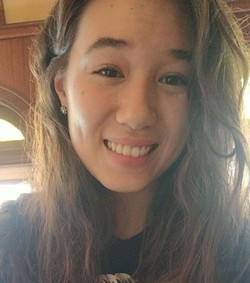 Courtesy Jessie Lewis
Whitworth student Jessie Lewis was shot with rubber bullets by Spokane police during the May 31 protests related to police brutality.
Lewis was stitched up and sent on her way. The road to recovery since then has been painful, particularly in her left leg, which she couldn’t walk on for three days after the incident.

College students around the globe are emerging from their education into a world marked by a pandemic as well as conflicts in a racially sensitive time. This new generation isn’t taking a back seat when it comes to current events such as the Black Lives Matter protests. Lewis put herself on the frontline of a demonstration against police brutality. For her, it was important to make a stand and be heard, especially as part of a new wave of voters coming in to impact the political climate.

“It’s particularly important for our generation to start this wave,” Lewis says. “Coming out of college, we have the mindset to search for truth. I want our generation to not give up. We are the change that is coming and we can establish a new system if we want it enough.”

Toward the western side of Washington, in Edmonds, recent Whitworth graduate Kyle Gaul shares the same motivation as Lewis, voicing support whenever he can for the Black Lives Matter movement.

“I didn’t feel good. It breaks my heart that we have to be protesting this in 2020,” Gaul says.

After Gaul graduated with a music degree in May, he went to live with his parents. Like others, he made signs and joined demonstrations on the sidewalks of Edmonds, where people driving by honked at them or flipped them off.

“For many people coming out of college, it can be hard to be an activist,” Gaul says. “We’re all in a weird and unplanned spot right now because of everything that’s been happening this year. It gets in the way of me wanting to do more for activism.”

Gaul made a visit to the newly dubbed autonomous zone on Capitol Hill in Seattle, a space for protesters to gather and express themselves without any police presence. Fellow Whitworth classmate Makayla Long, who recently graduated with a degree in political science, also was eager to visit the autonomous zone.

“I took a course on revolutions in history. Many times, the people that instigated change were students from universities,” Long says.

Long also attended the May 31 protest in Spokane, like Lewis. She arrived earlier in the afternoon, when people were gathering outside the town hall, bringing many of her classmates with her.


“It’s a formative time. We want to be part of something meaningful and symbolic,” Long says.

Lewis is taking time off from college to focus on mental health and finances, while Long and Gaul are both looking for work opportunities. Transitioning from the classroom to the real world in 2020 has some uncertainty for Lewis, Long and Gaul.

For all three of them, however, there is the certainty that they will be active participants of future efforts toward change.