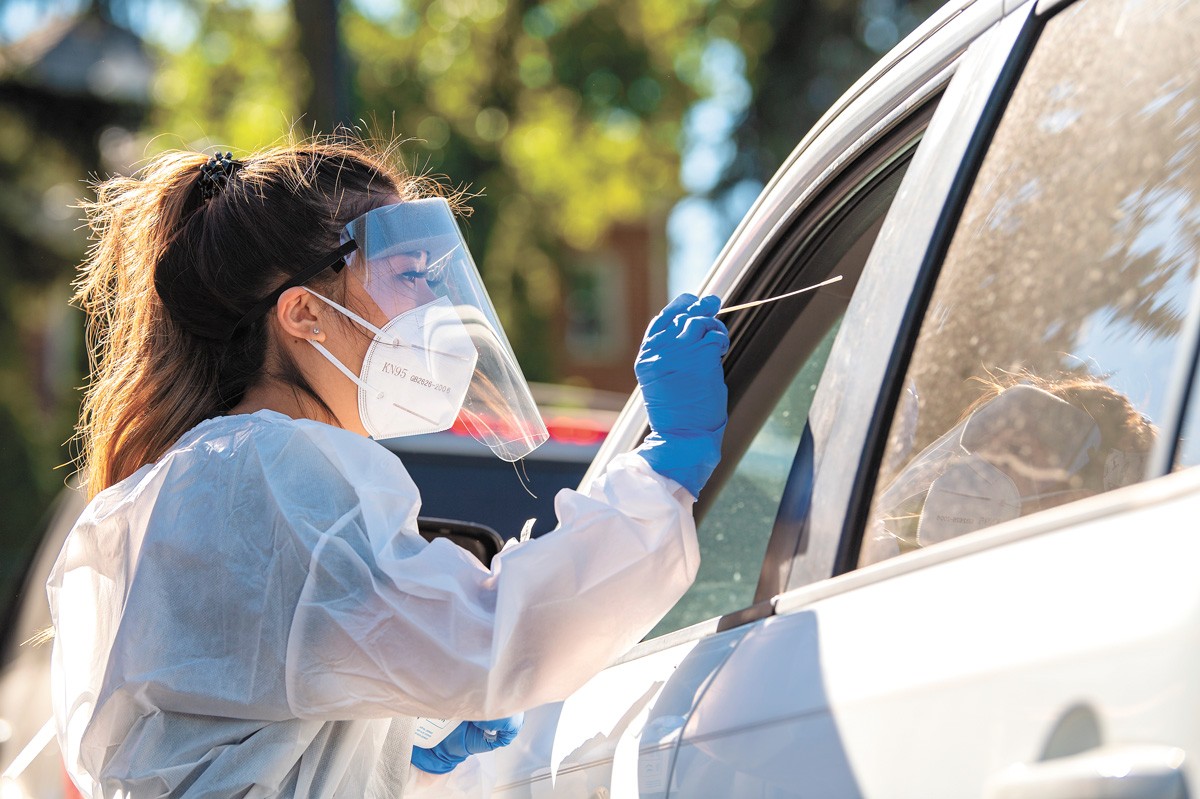 WSU photo
COVID testing is conducted on the WSU campus in September.

Washington State University tried to prevent this. In July, due in part to concern of a COVID-19 outbreak in Pullman, WSU abandoned its plans to start the school year in-person.

But by the time school started in August, thousands of students — many of them unable to get out of lease agreements — arrived in Pullman anyway. And in September, a COVID-19 outbreak exploded in Pullman, topping the New York Times list of COVID-19 hot spots in the country relative to population. As of this writing, Whitman County has counted 1,787 positive COVID-19 cases, six active hospitalizations and 13 fatalities related to the illness. Students in Pullman made up nearly 1,400 of those cases, yet none of the hospitalizations or deaths, WSU says.

That's true across the country as colleges have been linked to more than 214,000 COVID-19 cases. But after a summer where local universities wrestled with the decision to open in-person or not, the first couple of months of the school year have revealed a messy reality: In-person classes have played a tiny role in how the coronavirus spreads.

University of Idaho opened in-person this summer and experienced a significant outbreak of its own, but it was still much smaller than the outbreak at WSU, just 10 miles away. In Spokane County, Gonzaga and Whitworth opened for in-person instruction while Eastern Washington University kept classes online — yet EWU saw the biggest COVID-19 outbreak among the three.

Public health officials say that's because it's not college itself driving the spread of COVID-19. Rather, it's the college experience. That includes the Greek life, parties and small social gatherings in dormitories.

"Most of our transmission with college students is not really related to the context of what happens in the classroom," says Mark Springer, epidemiologist with the Spokane Regional Health District.

'PLANNING FOR THE WORST'
There's no doubt that fewer students returned to Pullman this school year than the roughly 20,000 who normally do. However, it didn't stop some students from acting like things were normal anyway. Before long, reports surfaced that students were throwing parties. Police tried to issue tickets for violating pandemic restrictions, but social gatherings continued nonetheless.

Jason Sampson, WSU's assistant director of public health, says 95 percent of the COVID-19 cases associated with WSU are students, with 15-20 cases among faculty or staff. In all cases, social gatherings drove the spread of the virus.

"It doesn't matter if it was the students, or the faculty or staff. It was, really, the socializing," Sampson says. "In a structured environment when people are at work, when people are in the classroom, even when working out of the recreation center, there was no transmission."

Living situations that involved several people living in one house made things worse. He says WSU and its team of contact tracers haven't identified any superspreader events. Instead, it was more common to have something like this cycle: A student would go hang out with friends, then bring the virus back home, and spread it to their five roommates. Then those roommates would go hang out with other friends and spread it to them.

Relatedly, the presence of fraternities and sororities have been correlated with higher spread of COVID-19 at local universities. WSU, along with UI and EWU, all have a Greek system, and all were hit with COVID-19. Last week, Washington Gov. Jay Inslee issued a proclamation in response to the college outbreaks limiting the number of people who can share a sleeping area. The proclamation also called for colleges to provide isolation and quarantine facilities for frats or sororities.

Sampson says no WSU students in Pullman have been hospitalized from COVID-19. The concern, however, is the virus spreading to more vulnerable populations. The virus has made its way into long-term care facilities in Pullman, and all the COVID-19 fatalities in Whitman County have occurred since school started.

"Anything that increases the viral activity within the community increases the probability that the virus will find its way into these facilities and threaten the most vulnerable in our community," Henderson says.

In Cheney, EWU saw what was happening at these colleges, which start earlier than Eastern does, says Annika Scharosch, associate vice president of risk management for EWU.

"We were planning for the worst," she says.

Still, the virus spread in a similar manner in Cheney despite EWU classes being mostly online. Since mid-September, when school started, there have been 170 cases among EWU students and employees in Cheney.

"We saw a significant peak right when students were moving back to Cheney," Scharosch says. "Our understanding is they are catching it outside of the classroom, whether that's social gatherings, parties, or family get-togethers."

The number of new cases have dropped back down in recent weeks. But the outbreak at EWU was still worse than at Gonzaga and Whitworth. Whitworth, the smallest of the three, had zero active cases Monday among on-campus students, and just over 51 overall since school began. Gonzaga has had 111 cumulative positive cases among students and employees since August. Both universities conduct surveillance testing, or pre-emptive testing of a sample of the population.

So far, there have been no proven instances of classroom transmission. Gonzaga officials credit the design of classrooms and a team tasked with responding to positive COVID tests and moving students into quarantine.

"GU has laid out effective strategies to this point. But we know we cannot let our guard down," says Kristiana Holmes, director of health and counseling services.

The relative success at the colleges that opened in-person may not mean much to those who didn't, however. Weiler, with WSU, says the choice to go online may have prevented an even bigger outbreak.

"I believe that not having 20,000 students return to Pullman was the right choice," he says. "If we truly had every student back, I think we would have seen a larger outbreak."

MOVING FORWARD
WSU has already announced that next semester will be virtual as well. That's based in part from advice from Whitman County public health officials, Weiler says.

"It's looking like this winter and fall are going to be really bad," Weiler says.

But Springer, the Spokane Regional Health District epidemiologist, says his thinking has been "modified" since the summer, indicating he's more confident with in-person classes.

"I think, yes, we could move forward with those safely," Springer says.

There are some caveats: Classes in the fine arts, or in engineering, might be more challenging to conduct safely. And food service remains a concern, since students may eat together without facial coverings.

The bigger issue, he reiterates, is the other stuff that goes along with college life. Housing will remain an issue, as long as groups of people are crowded in a living space together. Students socializing may remain an issue, too, especially if they let their guard down and don't wear masks together.

Even though case counts at local universities have stabilized for now, and even if colleges can conduct classes face-to-face without major problems, that doesn't mean college will feel normal anytime soon.